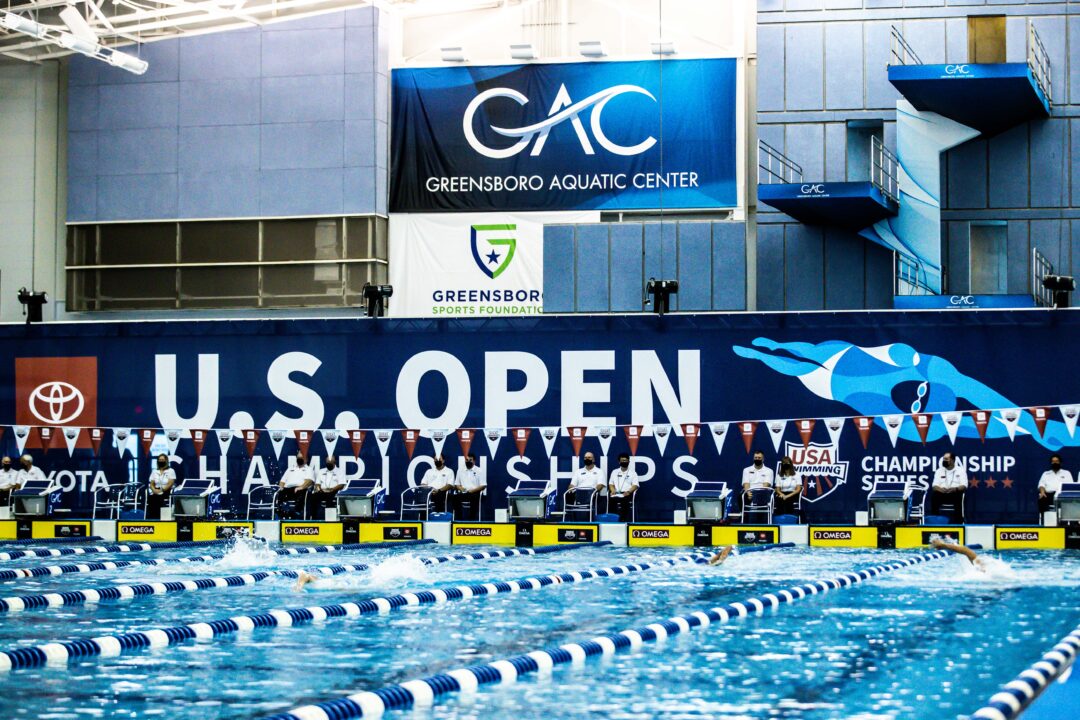 Landon Driggers, a transfer from D2 Indy to Tennessee this season, dropped 3.5 seconds in his 200 IM to highlight the swims you may have missed on Day 2. Stock photo via Jack Spitser/Spitser Photography

It was easy to get caught up in the madness at the front of the men’s 200 IM race. Chase Kalisz, newly reunited with Bob Bowman, broke the U.S. Open meet record in the event. Teenage stars Baylor Nelson and Daniel Diehl finished 2-3, with Diehl posting a lifetime best and breaking 2:00.

Behind them though, Tennessee’s Landon Driggers grabbed fourth in 2:02.27, swimming away from Mark Szaranek. Driggers was the 400 IM runner up at 2022 Division II NCAAs, and announced his transfer from UIndy to Tennessee over the summer. The move has clearly worked out for him so far, as he posted multiple lifetime bests at the Tennessee Invite last weekend.

He’d clocked 2:02.77 in prelims, then lowered his best in finals. He came into the meet with a lifetime best of 2:05.89, meaning he dropped 3.62 seconds over the course of the day. From his January time to finals, he’s made big improvements on the front half of his race. He’s over 1.5 seconds faster on fly and just under that on backstroke, as he split 27.04 on fly and 30.34 on back tonight.

We’ve talked about Auburn a lot his year, but it’s truly impressive what second year head coach Ryan Wochomurka is building there. They’ve managed to keep building on the successes that they had in March 2022, both in yards and meters.

Today, it’s their sprint group who caught our eye, as Lexie Mulvihill and Kalle Makinen both dropped lifetime bests. Mulvihill, a sophomore, finished second in the ‘B’ final in 25.68. That cuts .14 seconds off her lifetime best, which had stood since May 2021.

Finnish freshman Kalle Makinen is new to yards, so it’s unsurprising that he’s been dropping best times left and right over the first half of Auburn’s season. As he’s more used to meters, his 50-meter free from U.S. Open prelims shows just how much effect Auburn training is having for him. He blasted 22.89, blowing past the 23 second barrier for the first time. His old best time was 23.14, from the Monaco stop of the 2022 Mare Nostrum tour. NCAA sprinting is a discipline that is more crowded than ever (as evidenced by the number of sub-19s we’ve already seen) but Makinen’s sprinting abilities are already giving a boost to the quickly rising squad.

SwimMAC’s Avery Klamfoth earned 7th in the 200 IM on Day 2 in Greensboro to the tune of a new personal best. The recently aged up 15-year-old touched in 2:16.36, shaving about half a second off her best, which she swam at Junior Nationals this year. That previous best of 2:16.88 put her 17th on all-time in the 13-14 age group, but since she’s aged up, she won’t move up.

The difference maker for her was her closing speed. In July, she came home in 32.15. Tonight, she split 31.86 on the freestyle leg which allowed her to pass Gracie Weyant.

Klamfoth is best known for her breaststroke, and this best time to kick off her meet could be a sign of things to come for her this weekend. She’s slated to race the 100 breast, 200 breast, 200 fly, and 400 IM at this meet.