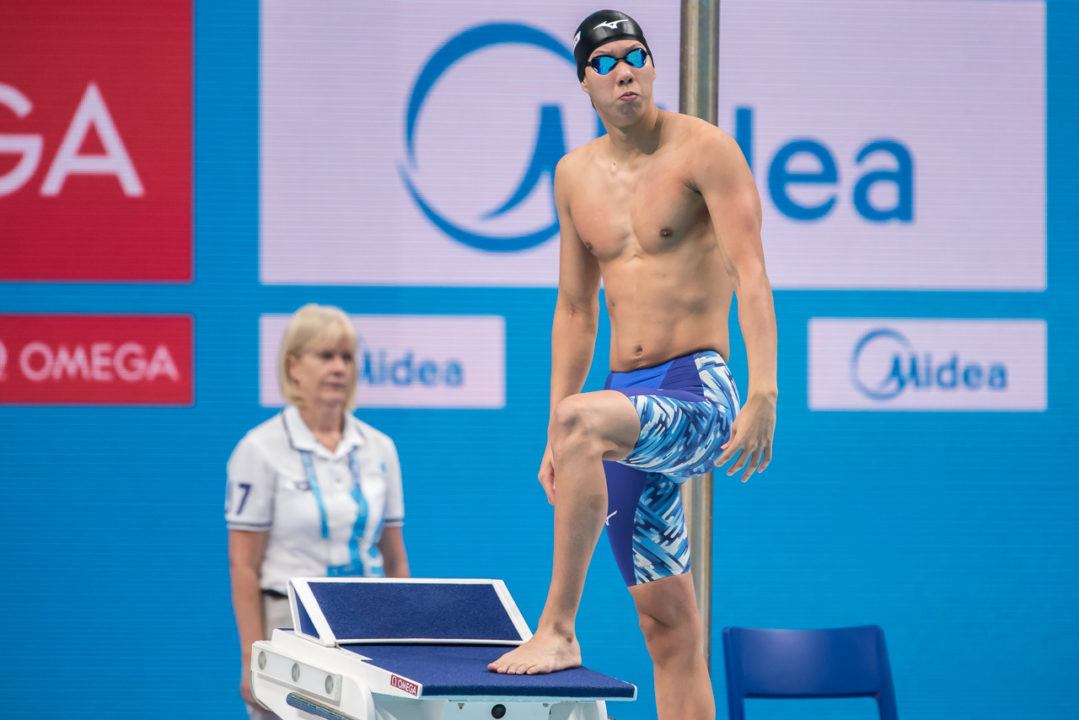 The men's 200 breaststroke at this non-selection Japan Swim was a battle to behold and a preview of next year's Japanese Olympic Trials. Archive photo via Peter Sukenik/www.petersukenik.com

The 2020 Japan Swim concluded with its last event as one of the marquis matchups of this non-selection meet.

The men’s 200m breaststroke was highlighted as one of my top 5 races to watch here in Tokyo and the field made it happen with two sub-2:08’s produced as a result.

First off in this morning’s heats, one of the key players was taken out of the mix right off the bat, as Olympian and Pan Pacs champion Yasuhiro Koseki placed dead last in 24th place with a time of 2:16.36. For a man who owns a lifetime best of 2:07.18, this result points to the 28-year-old either taking it easy or potentially encountering an issue during the race.

I watched the prelim race and didn’t see anything glaring from Koseki during his swim. I’ve reached out to Koseki to find out more.

With one less competitor to fight off, young gun Shoma Sato took the top seed with a time of 2:09.82, a mark within the realm of his previous personal best before he started getting dangerous with times in the 2:08 and below realm. Remember this is the 19-year-old who punched a monster 2:07.02 earlier this year to become the world’s 5th fastest performer all-time.

Come tonight’s final, however, veteran and former World Record holder Ippei Watanabe took control, hitting the wall in a time of 2:07.08. Splitting 1:01.27/1:05.81, Watanabe held off Sato who was still impressive with a 2:07.69 coming directly off short course meters competition as a member of Tokyo Frog Kings in ISL season 2.

Sato produced a 1:00.95 opener before bringing it home in 1:06.74 to place as the runner-up behind Watanabe. The latter’s 2:07.08 tonight registers as Watanabe’s 4th fastest performance of his career.

As for Watanabe, he is already the world’s 2nd fastest man ever, holding a PB at the former WR mark of 2:06.67 set in 2017 before Russian Anton Chupkov brought it way down to 2:06.12 last year at the FINA World Championships.

As such, this men’s 200m breast is shaping up to be one of the most highly-anticipated races of the postponed 2020 Olympic Games.

Are you currently stationed in Tokyo, Retta?

Watanabe is equal second all time with Australia’s Matt Wilson?

Japan alone in this event is so deep. 2:08.15 being the 6th fastest Japanese performer? Crazy.

It’s looking like Wantanabe and Sato are most likely going to be the ones representing Japan at home.

Not that this point hasn’t already been hammered to death, but a field of Chupkov, Matt Wilson, Wantanabe, Kamminga, Sato, Stubblety-Cook, Wilby, Koch, or someone else or an unknown (maybe, just maybe American, lol) will just be bonkers.

Throw in Either Andrew Wilson or will licon in there as a potential if they make the team.