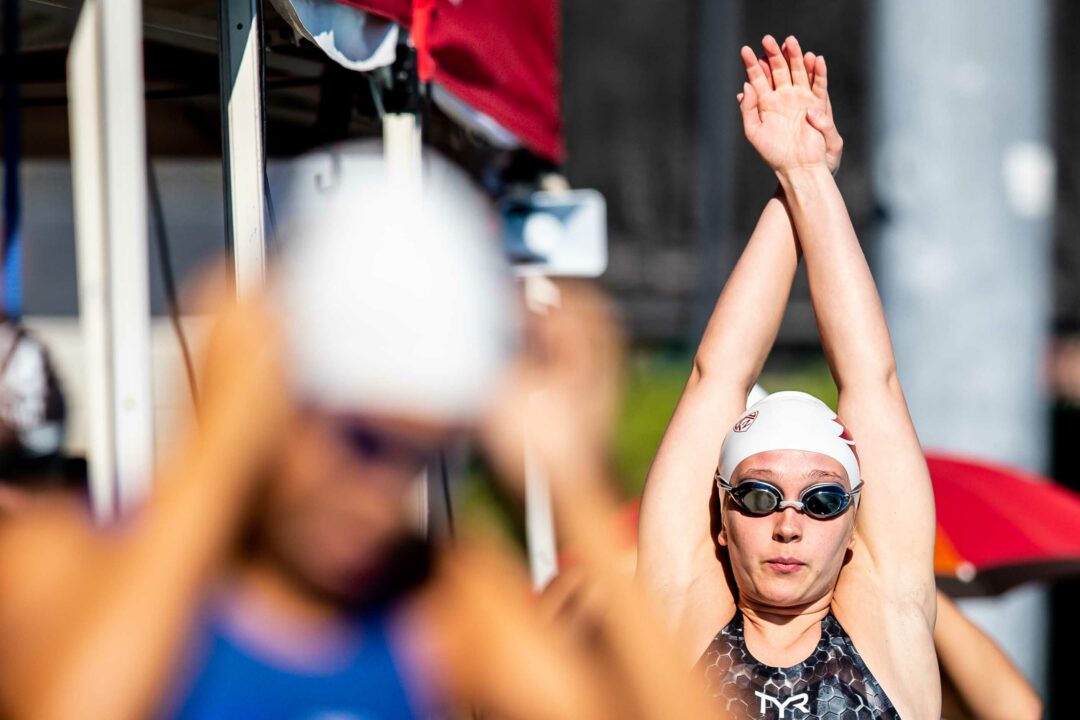 The Cougars took a narrow 2-point win over the University of Arizona, which was their first win in 6 all-time matchups between the two Pac-12 programs. Archive photo via Jack Spitser/Spitser Photography

The Washington State Cougars picked up a hallmark win in the 3rd meet of their 2021-2022, slipping by the Arizona Wildcats at home by a score of 131.5-129.5 on Friday morning. The Cougars are now 2-0 in dual meets this season.

That win marks the first-ever victory for Washington State in the head-to-head series between these two Pac-12 opponents.

The two teams didn’t face off for the first time until the 2012-2013 season, where Arizona won 119-75. Arizona has won all 5 previous matchups between the teams, with an average score of 157-94 in favor of the Wildcats.

Preliminary information available to SwimSwam indicates that neither team was wearing technical racing suits for the meet.

The meet featured only swimmers. Washington State doesn’t sponsor a diving program, but there were no divers at these teams’ last two matchups either, both of which were won handily by Arizona.

So, even with that context, the result shows a possible shifting of power in the Pac-12 Conference.

“This is a big win for our Family!” Leach told SwimSwam after the meet. “We have always preached Family 1st, Academics 2nd, and Competing 3rd. These Cougs are hungry to continue to elevate and raise the bar day in and day out. Our TEAM did this because of our FAMILY bond. I’m so proud of everyone and we are looking to continue improving day in and day out! Go COUGS!”

Leach is entering his 4th season leading the program, arriving in 2018 from Indiana State.

Taylor McCoy led all individual scorers in the meet with 21 points. That included wins in both the 200 backstroke (2:03.22) and 200 IM (2:05.86). Those are both races that she swam at the Pac-12 Championships last season, finishing in the B final of both races. There was no 400 IM on the meet lineup – that’s her best event, and one where she finished 8th at Pac-12s last year.

McCoy is building off a breakthrough long course summer that saw her make 4 A-finals in 4 events at the Speedo Summer Championships – West meet in early August. That included a best time of 4:53.56 in the 400 IM.

Julia Heimstead also picked up two wins for the Wildcats, topping both the 100 fly (55.89) and 200 fly (2:03.75). She won the latter race by almost three seconds. She was a Pac-12 A-finalist in the 200 fly last season, where she finished 7th in 1:59.73. Heimstead was already 2:00.47 at last week’s SMU Classic. She appears to be set up for a big sophomore season, even though she didn’t race in an official meet between last year’s Pac-12 Championships and last week’s SMU Classic.

But it was the surprising depth of the Cougars that wound up carrying the day. Lauren Burckel won the 100 breast in 1:04.31 and had three top-3 finishes. That 100 breast time is two-and-a-half seconds better than she was last week at the Chik-Fil-A invite and is a season-best by 8-tenths.

Mackenzie Duarte won the 200 breast for Washington State ahead of Burckel’s second-place finish, and similarly had three top-3 finishes. Her 2:18.46 was similarly a season-best for her, but more than two seconds, as the Cougars were much better than they were last week almost across-the-board.

This result continues an inauspicious start for the Arizona women, who were 6th out of 6 teams at last week’s SMU Classic. Hannah Farrow, the team’s top swimming scorer at Pac-12s last season, swam just 1 race at the meet, finishing tied-for-5th in the 100 breaststroke.

Arizona finished 6th and Washington State finished 7th at last year’s Pac-12 Championships. There are 8 teams that sponsor women’s swimming programs in the Pac-12, but Arizona State redshirted the entire 2020-2021 roster because of the COVID-19 pandemic.

Arizona will be back in the water next weekend when they host Wisconsin and Hawaii in Tucson. Washington State will race Arizona State on Saturday in Pullman as part of their double-header block against the conference’s Arizona teams.

Is the team environment at Arizona really that toxic? I’ve only been seeing comments about it and I’m curious.

Yes. It’s full of bullying and mean girl behavior. When bullying is reported to coaches, they do nothing about it and turn a blind eye. The environment is made up of bullies and bystanders to the bullying. Toxic and the results speak for themselves.

Always starts at the top and therein lies the problem. Poor leadership.

Come on people Arizona really didn’t make much of an effort to win this dual meet. They could easily have won if they moved swimmers around to score more.

So they underestimated a rising program…why thank u very much❤️

Rising from 8th to 7th? They will still finish 8th at conference if you want to hear the truth.

doing well at Pullman will always be hard given poor facilities and zero support from the admin. Matt is working some magic with what he is given and the man deserves some serious credit! Go Cougs!

Yeah. But they lost. So there’s that.

Dude screw these comments… WSU is a rising program who has a coach that is determined to make WSU swimming a better program than the year before. Arizona came in with the attitude they have always had at meets. Don’t downgrade wsu because u think u of a had a bad meet. When In reality WSU just beat them 🙂 😉

I know it doesn’t fit everyone’s narrative as well… But there also exists the possibility that Washington State is improving a lot and that program might be one to watch out for.

You know, we all want to run Arizona through the mud. But we need to be celebrating Wash St a lot more here. Credit to what they are building and excited to see another competitive team rising in Women’s swimming in the PAC 12.

I think the thing you may be missing is that a lot of people in this thread are probably ASU alumni, who will NEVER pass up an opportunity to drag U of A through the mud. Regardless, it’s possible for both things to be true simultaneously and that this is an example of two programs going in different directions. Wash St. deserves credit for what they are building up at Pullman, but the current U of A staff also deserves criticism for what they are dismantling down in Tucson.

So how many more years do you give Augie

U of A football = U of A swimming.
Guess admin don’t care. Even Leah left.
Transfers galore. Enough said.

With the location, alumni and facilities this can be turned around quick. The staff still got some of the recruits from the old staff hanging around could be the issue. Once there’s a clean slate on the roster, give this staff a couple years and this’ll be a top program.

I’m sorry, but you’re blaming the 5th year seniors, aka *checks notes* Brooks Fail? Who, by the way, was recruited by the old staff, but never swam for them?

The old staff who *checks notes* were led by a guy who was Augie’s dad’s assistant for 20 years?

Yeah absolutely nothing about this comment checks out. Good effort though.

There is only one swimmer on the entire roster who will be relevant at NCAAs and he is one of those recruits from the old staff. Even if that wasn’t the case, I have little time for people who try to blame inherited athletes. If you take the job, you owe it to those kids to coach them up. You don’t use them as scapegoats for your lack of results.

Confused by the comments. The only athletes left from the previous staff score points. Brooks and diver Delaney. So you are asking to clear all points for Augie to replace? How to build a program: You build each year. First year is a gem getting brooks. Then athlete or two a year, build a relay over a couple years. But so far no points have been regained, athletes have only transferred and so has staff. Time to move on from the college volleyball player.

He’s had his chance. Done. Can’t recruit- especially women. Blows off the alumni base and is arrogant. Big problems when alums won’t send their kids there. End of story.

As a once proud alumnus, this continues to sicken me. It was a positive step hiring LJ, but way more needs to happen.

Should qualify this by saying at least she reached out to us. Maybe hear from him once a year…