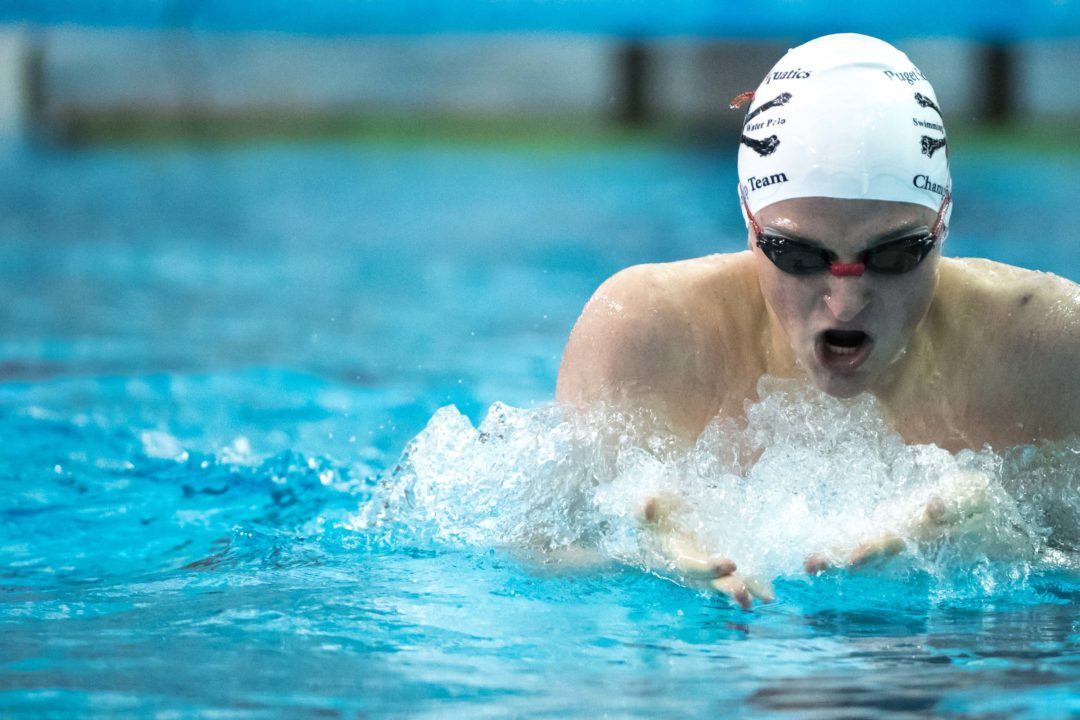 Alex Wright (above) will race at this year's 4A state championship meet for Olympia High, which should shake up the distance freestyle events. Archive photo via Mike Lewis/Ola Vista Photography

The 2018 Washington boys’ high school state championship meet will be held this weekend in Federal Way, Washington, with a two-day, prelims/finals format for each meet. In Washington, 2A combines the states smallest schools, and each classification up from there includes schools with larger student bodies.

Larger doesn’t necessarily mean faster though – Bainbridge Island returns in 3A to defend their state title from last year. The team, which won the title by 18 points over traditional power Bellevue last season, returns 4 individual event winners from last season that combined for 5 individual event titles: junior Garrett Waite (200 IM); junior Makai Ingalls (50 free and 100 fly); junior Kevin Houseman (100 breast); and sophomore Jude Wenker (100 free). That group combined to break the Meet and State Records in the 200 medley relay last season in 1:32.64, and all 4 are back for more this season.

In 4A, with the state’s biggest schools, Camas are the defending champions, and have a bigger margin to work with – they were 96 points better than runners-up Skyline last year. While Kamas returns double state champion Mark Kim, who won the 200 free (1:4.76) and 500 free (4:35.15) by comfortable margins last season (4 and 7 seconds, respectively), they have graduated a key relay piece: Tom Utas, who won the 50 free at last year’s meet. Skyline, though, also lost their top sprinter – Jacob Leahy – the 100 free state champion (which becomes a wide-open race: the top 4 finishers, and 5 out of 6, were all seniors).

Kim won’t be a runaway in the 200 and 500 this season like he was last. He’s seeded 2nd in the 200 free and 3rd in the 500 free, including behind Olympia high school’s Alex Wright, who didn’t swim at last year’s state meet but is seeded with a 1:41 in the 200 free and 4:33 in the 500 free. Those two could be two of the real slug-fests of the 4A meet. Olympia finished in just 32nd place at last year’s state meet, and while Wright’s presence won’t be enough to make them title contenders, it bumps them way up the scales – including a 6th seed in the 400 free relay.

in 2A, the state’s smallest schools, the boys from Kingston High School sit with top seeds in all 3 relays. They’ve already been better than the 2A meet record in the 200 medley relay and are within striking distance in the other two. In individual events, they have a single #1 overall seed (Timothy Gallagher – 200 IM) and the #2 overall seed in 4 events. The two teams best-positioned to challenge them in their title defense are Anacortes, with a deep team, and Columbia River, which is led by Notre Dame commit Josh Bottleberghe. Last year’s 2A runners-up Steilacoom lost a lot of their depth to graduation (including 3/4 legs on their 200 free and 200 medley relays), but still have a veteran roster and an ace up their sleeves: by far the best diving group overall of the 4 contending teams (though Anacortes has a probable scorer in Zane Wentzell as well).