Wallace Loses Funding, While Murdoch Moves Up On British Performance 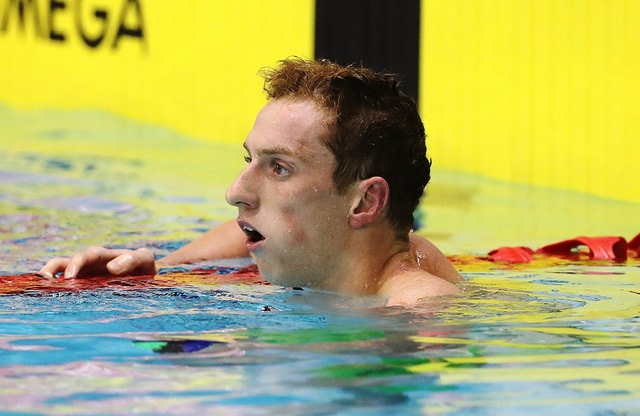 British Swimming has announced its Podium and Podium Potential performance squads for 2018, with a couple notable performers left off the list. Archive photo via Scottish Swimming

British Swimming has announced its Podium and Podium Potential performance squads for 2018.  After extensive selection procedures, including an analysis of the athletes’ current and past performances in an effort to ascertain Olympic medal likelihood, a total of 56 athletes are split between two groups. 19 swimmers have been designated ‘Podium’ with 37 designated as ‘Podium Potential’.

The Podium-level support recognizes those athletes who have the potential to medal in the near-term, while the Podium Potential athletes are those in which a longer-term investment is being made.

Among notable names listed on the 2017 program that are missing this time around include Dan Wallace, the Olympic finalist that pleaded guilty to a driving under the influence charge which resulted in a suspension that just ended on September 12th. Breaststrokers Andrew Willis and Chloe Tutton were members of the ‘Podium’ squad in 2017, but were moved to the ‘Potential’ list for 2018.

Moving up to the Podium level are Stirling teammates Kathleen Dawson and Ross Murdoch. Dawson has shown promise by wreaking havoc on the Scottish national records in the backstroke, while Murdoch finaled in both the 100m and 200m breaststroke events in Budapest, finishing an encouraging 4th in the longer distance.

British Swimming National Performance Director Chris Spice said, “The sport enjoyed a successful 2017 but we know that our aims and ambitions don’t end there. This year’s investment is going to enable our talented swimmers to continue to achieve their performance targets as they set their sights on Tokyo 2020.”

He continued, “Performing a season’s best at the major meet of the year remains the priority of our athletes at all levels. We still have work to do in this area but this year provides a great platform for moving forward.  I would also like to take this opportunity to thank UK Sport and the National Lottery for their continued support of the programme.  Without their help and those that buy lottery tickets, we would not be where we are now.”

British Swimming’s Head of Elite Development, Tim Jones said, “The 2017 season was all about exposing a large group of junior athletes to high-level international competition. In total 57 swimmers represented Great Britain at the season’s major junior events. Whilst it is always nice to bring home the number of medals that we did, our most important goal was to identify a group of swimmers who could successfully transition to the senior ranks and add firepower to the British team that will travel to Tokyo 2020 Olympic Games.

“Selections onto the 2018 World Class Programme include a new group of swimmers who we feel possess both the potential and key character attributes to enhance the senior team throughout this next quadrennial.”
– tim jones – head of elite development

We have added athletes who stepped up to be counted at the World and European Junior Championships but have also shown the desire to make the important junior to senior transition.”

“Over the next 12 months we will continue to expose this group to a variety of uncomfortable and challenging experiences to ensure they are adequately prepared for the rigors of senior international competition.”

Surprised to see C W-H still on the Podium list ?

For the medley relay I think, still GB’s best backstroke do by some margin. Same reason Grainger, Jarvis and maybe Milne are there.

Beaten by Dawson at Worlds, so I doubt they Could justify it

Some of the names on this list are a tad optimistic. Athletes who’ve had years to prove themselves as podium-dwellers, but simply have failed to make that step up time and time again. Time to cut some good athletes free, to be quite honest, and put a little more into the youngsters. I’d rather not continue to pump thousands into ‘reliable’ 5th-8th placers (at best) if it’s to the detriment of youngsters who haven’t yet had their shot.

I think UK Sport dictate who gets what in many circumstances. GB pick based on there guidance…. Potential list I am not so sure!?

Pretty weird that World Championship bronze medalist Tim Shuttlewort not is on the first list.

Probably because it’s not an Olympic event. As Jonny_B has suggested, UK Sport set most of the criteria