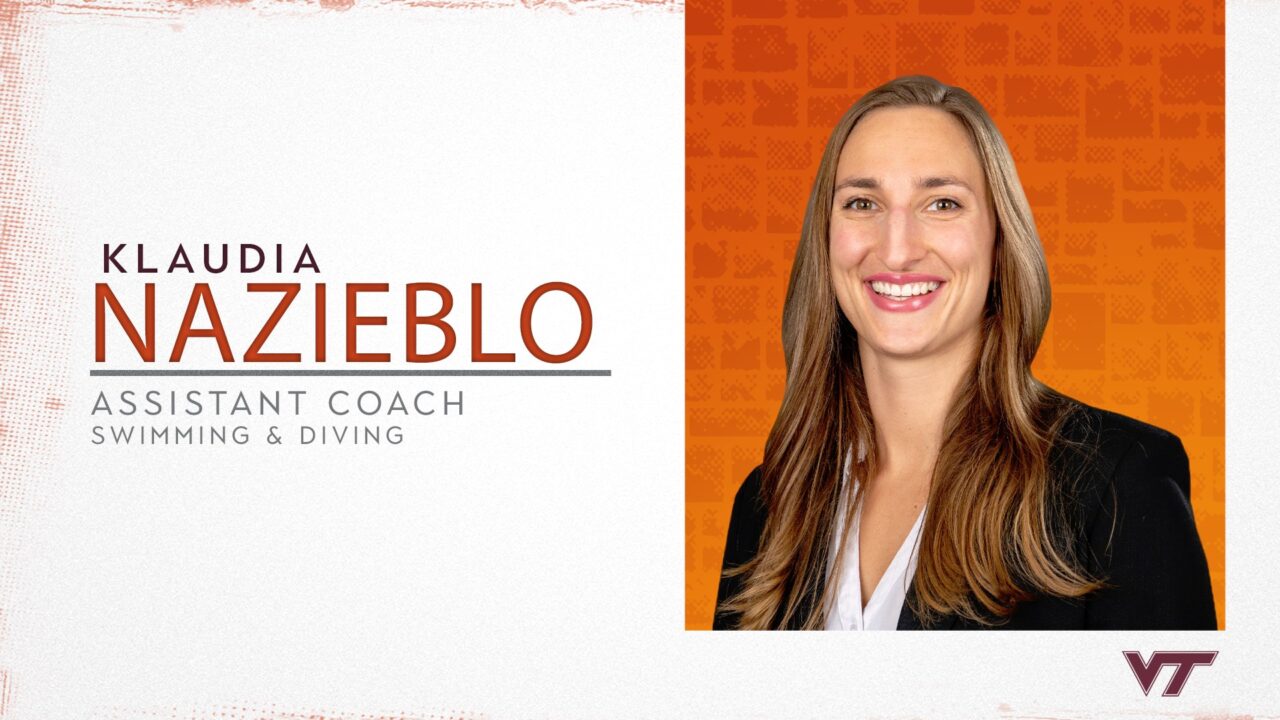 Virginia Tech has added Klaudia Nazieblo to its swimming & diving coaching staff for the 2022-2023 season. She fills the slot previously occupied by Jacy Dyer, who last week was announced as the new head coach at Division I Fairfield University.

Nazieblo, who is a native of Poland, swam collegiately for the Hokies from 2014 through 2018. During her collegiate career, she earned seven Honorable Mention All-America honors and one First Team honor in 2016 when she placed 7th in the 200 fly. Her eight total All-America honors is one shy of the school record of nine, which is held jointly by Jessica Botzum and Kaylea Arnett.

She set a number of program records in her time at VT, and remains the school’s record holder in the 200 yard fly individually, as well as in a number of relays.

Nazieblo graduated the season before current head coach Sergio Lopez took over the program, though she has continued to train at Virginia Tech as a post-grad throughout Lopez’s tenure. While she didn’t quite get to her personal bests in long course while training under Lopez, she came close with a 2:11.67 in June 2021, just three tenths from her fastest swim at the 2017 World Championships (where she finished 22nd).

Nazieblo’s only prior coaching experience came last season, when she served as a volunteer assistant.

“I am extremely happy that Klaudia will be joining us as an assistant coach for our swimming & diving team here at Virginia Tech. I had the privilege to coach her these past four years as a professional athlete and also work side-by-side with her as she was a volunteer coach with our team this past season,” Lopez Miro said.

“Klaudia’s passion for Virginia Tech and to be a Hokie is unmatched as she has spent the last eight years, either as a collegiate student-athlete or as a professional swimmer, representing the Hokie Nation at the highest level. Her amazing experience and desire to keep learning to be excellent will only enhance our swimming & diving team to keep moving forward to be at the top of the conference and national level. The future is bright.”

Nazieblo graduated from the College of Science with a degree in Economics and a Minor in Business Leadership and Communication.

“Virginia Tech provided me with the opportunity to grow and develop as an athlete and as an individual. It is an incredible honor for me to be a part of this Virginia Tech staff and I will strive to embody our motto of Ut Prosim (translation: That I May Serve) to serve the new generation of Hokies,” Nazieblo said.

Nazieblo most recently represented Poland at the 2021 European Aquatics Championships (the postponed 2020 meet), where her best finish was 13th place in the 200 fly semifinal.

She represented the DC Trident during the 2021 season of the International Swimming League, competing in all five regular season meets and all three playoff matches. She finished the year ranked tied-for-149th in MVP scoring league-wide and 19th on the Trident team at just over 10 points per match.

What’s the point of mentioning her not reaching her bests as a swimmer? Why bring someone down on something that should be celebrating them.