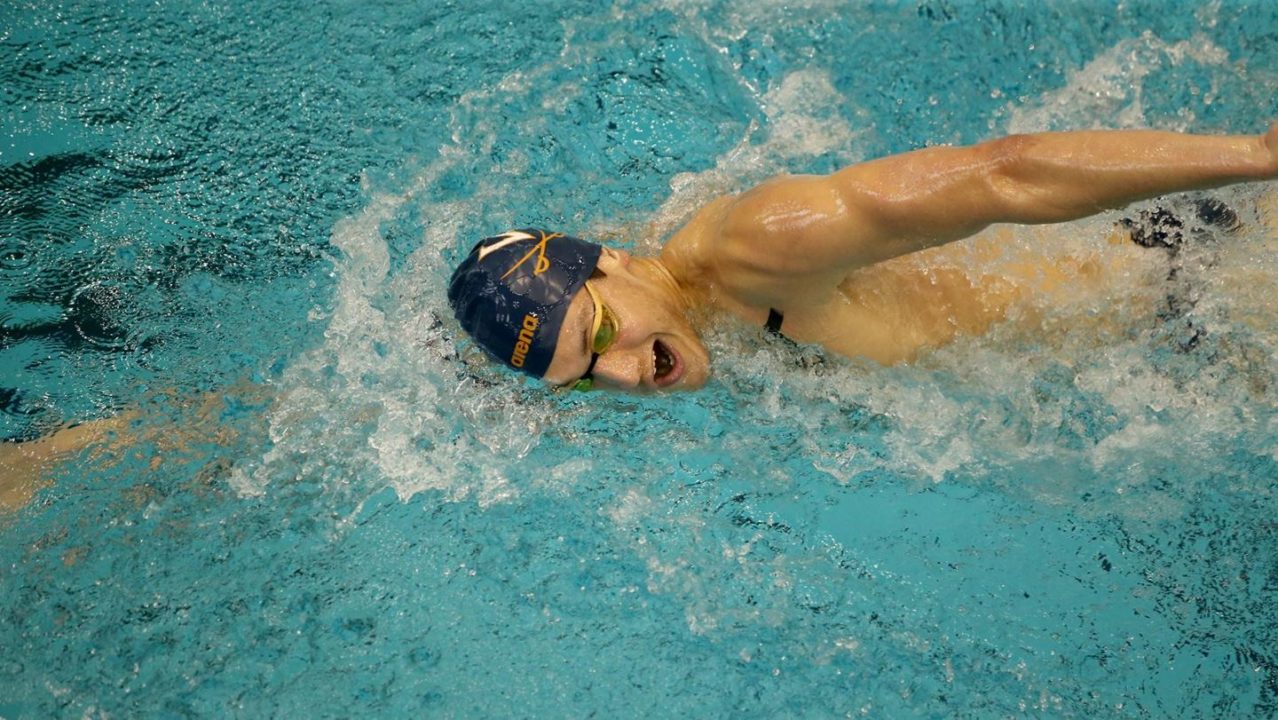 The Cavaliers will host NC State in a dual meet on Friday (Jan. 24) before celebrating Senior Day against North Carolina on Saturday (Jan. 25). Current photo via Virginia Sports

CHARLOTTESVILLE, Va. –  The Virginia men’s and women’s swimming and diving teams will close the regular season this weekend, hosting NC State in a dual meet on Friday (Jan. 24) before celebrating Senior Day against North Carolina on Saturday (Jan. 25) at the Aquatic and Fitness Center.

The Cavaliers enter the weekend with the women ranked sixth in the latest College Swimming and Diving Coaches Association of America poll, while the men’s team ranks 17th. NC State ranks third on the women’s side and seventh on the men’s side. The North Carolina women’s team is ranked 15th.

Admission to Virginia swimming and diving meets is free to the public. Public parking is available on a first-come, first-served basis at Slaughter Recreation Center and the parking lot closest to the West Gate at Scott Stadium.

How to Follow
Both Friday’s and Saturday’s meet will be streamed on ACCNX. Links to the broadcast and to live results are available at VirginiaSports.com. Results will also be pushed the Meet Mobile app, while updates throughout the competition will be provided on the team’s official Twitter account (@UVASwimDive).

Promotions
Friday will be a Sabre Rewards event with first 250 UVA students receiving free Domino’s pizza at the start of the swimming session at 4 p.m.

In addition to recognizing 11 seniors for Senior Day prior to the start of Saturday’s meet, the Cavaliers will have a face painter and balloon artist located in the lobby of the AFC.

Against NC State
•  The Wolfpack have recorded dual meet wins over South Carolina, Kentucky, North Carolina, Duke and the Arkansas women’s team. Both the men and women suffered a loss to Missouri.
• Nyls Korstanje (50-yard freestyle) and Coleman Stewart (100-yard backstroke; 200-yard backstroke) rank in the top-five nationally in events on the men’s side, while Sophie Hansson (100-yard breaststroke) ranks in the top-five nationally on the women’s side.
• The Cavaliers lost in last year’s dual meet against the Wolfpack in Raleigh. Madden won three individual events during the meet, while Keefer Barnum (Louisville, Ky.) and Matthew Otto (Newark, Del.) topped an event on the men’s side.

Facing North Carolina
• Grace Countie leads UNC, capturing the ninth-fastest time in the country in the 100-yard backstroke.
• The Tar Heels earned wins over East Carolina, Navy and the women’s team from South Carolina during the season. Both teams suffered losses to Georgia and NC State in addition to the men’s team falling to South Carolina.
• Virginia swept the Tar Heels in Chapel Hill during the 2018-19 season.

The Fourth-Years
• The Cavaliers will recognize 11 fourth-years for Senior Day prior to the start of the team’s swim meet against the Tar Heels on Saturday.
• The men’s team will honor Ryan Baker (Arlington, Va.), Joe Clark (Worcester Park, Great Britain), Henry Keel (Memphis, Tenn.), Jason Quinn (Chagrin Falls, Ohio), Ted Schubert (Ashland, Va.) and Bryce Shelton (Vienna, Va.).
• Sydney Dusel (Naperville, Ill.), Morgan Hill (Olney, Md.), Megan Moroney (Deerfield Beach, Fla.), Mary Claire Tansill (Bristow, Va.) and Madeleine Vonderhaar (Lakeside Park, Ky.) will be recognized from the women’s team.
• This group of fourth years has a combined 41 All-America honors and nine ACC titles.
• The women won the 2018 ACC title and finished as the conference runner-up in 2017 and 2019. The team captured its third-best finish in program history at the 2019 NCAA Championships, placing sixth in the team standings.
• Over the last three years, the men’s team has posted a 10th-place finish at the NCAA Championships, the program’s best finish since 2011, and back-to-back third-place finishes at ACCs.