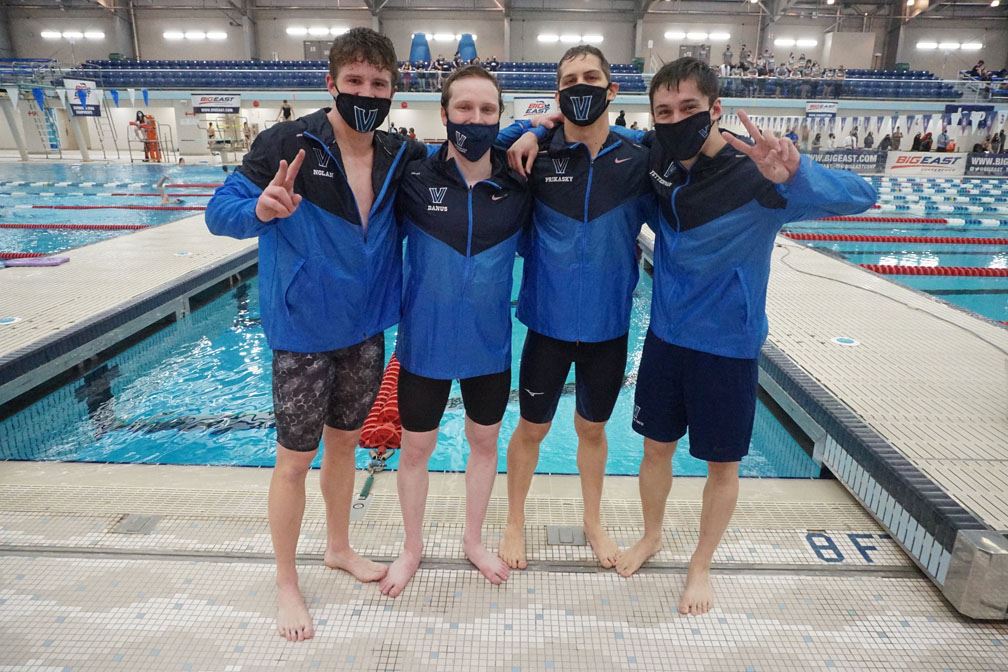 Richard Nolan (left) had more energy immediately after winning his first Big East title on Thursday evening than the average human does when well-rested. Archive photo via Villanova Athletics

Post-race interviews in swimming are often a struggle. Athletes have just finished giving a maximum effort, they’re wet, the lactic acid is rolling in, and all they wanna do is get in the warmdown pool and float for a minute.

But enter Villanova freshman Richard Nolan, who after winning his first career Big East title on Thursday evening in the 200 IM still had more energy than most human beings do when they’re fresh.

After his race, Nolan hopped out and did an interview for the Big East meet livestream and was full on hyped.

Visibly sucking air (his mask makes it obvious that he’s still not clear of that post-race oxygen deficit), Nolan brings the excitement. It’s been a tough year, with COVID, with this championship, like many others, being postponed, his first year of college being under a cloud of restrictions – and there is nowhere on earth that Richard Nolan would rather be than in this moment.

His swim could prove to be a big one – the Villanova men finished Thursday just 11 points behind Xavier for the overall team title, and that win over his Xavier opponent is a 6-point swing.

Let Richard Nolan be the little voice in your head hyping you up this weekend.

Wow…here is a kid who loves being in the moment and is obviously wanting others to enjoy his success. If Jimmy Fallon gets sick and they can’t find a replacement for his talk show, I think I will suggest this young man as a possible candidate. What enthusiasm !!

Hi Steve..no, just a fan of all that is SWIMMING ! Kind of like you but much older!

Dickie Noles!!! Had the pleasure of coaching this guy when he was younger. Class act and a great teammate. This dude is on 100 at all times. Go Richard! Go Nova!