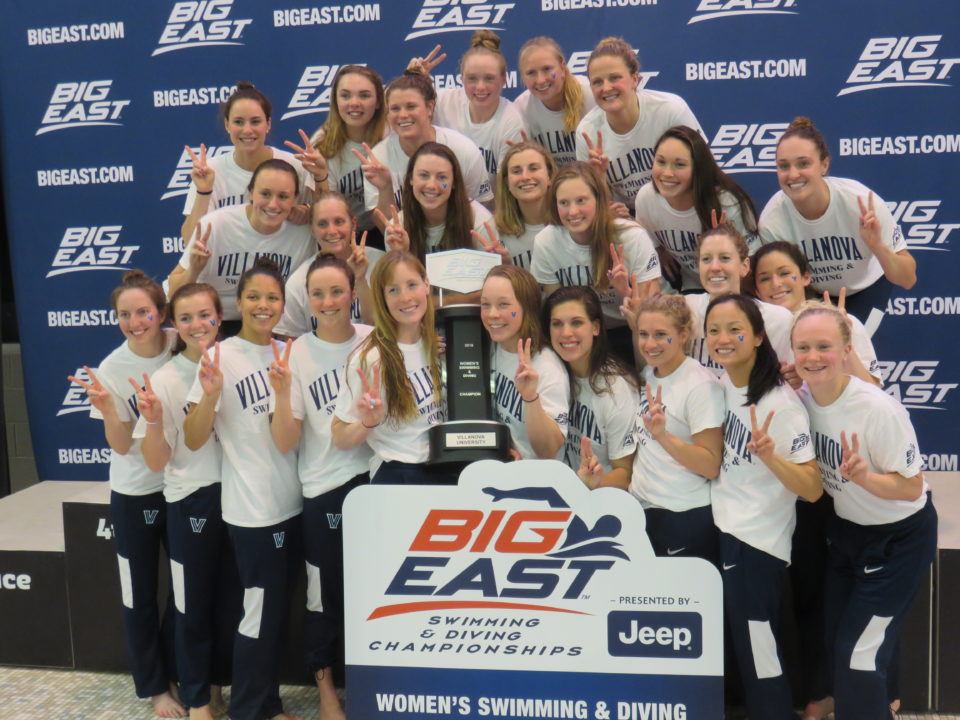 It has been a long time since the Men’s Big East Championships were this exciting.  One race after another every one of these athletes gives their all.  It is inspirational watching all of them – and to see the sportsmanship and camaraderie between teammates and between teams is just awe inspiring.

Villanova Women and Seton Hall Men defended their titles and were crowned Champions.

The lead went back and forth for the Men between Villanova and Seton Hall.  Villanova Men had not won a Big East Championship for 25 years – and were hungry for the title.  Seton Hall seemed to be leaving the door open – but left Villanova the runner-up.

100 Freestyle – Alex Fabbri once again showed her prowess in freestyle.  She touched the wall in 49.24 for Gold.  Teammate  Taylor Wilson followed with a time of 49.61 for silver and Emily Conners of Xavier  (49.86) for the bronze.  This was the exact finish from last year’s event – this time all three women had NCAA B qualifying times.

200 Breaststroke –  Molly Fitzpatrick of Georgetown continued her strength in the breaststroke events defending her title with a gold medal.  Her time of 2:12.81 beat Sydney Simpson of Seton Hall (2:16.60) and Villanova Wildcat Gabriell Daigneault (2:16.79) for bronze.  Fitzpatrick’s time was an NCAA B qualifying time.

400 Freestyle Relay –  Villanova continued its dominance of relays with a gold medal performance.  The team of Wilson, Cheruk, Wilson and Fabbri won the event in 3:18.51  – making it a clean sweep of the relays for Villanova.  It was also another pool record for the Villanova Wildcats.  Xavier took silver in 3:21.77 and Seton Hall took third in 3:26.85

1650 Freestyle –  Sophomore John Davidson easily won the mile tonight in the Big East Finals with a time of 15:25.52.  This smashed his previous best by 20 seconds and is both a new Villanova record and NCAA B cut.  Nicholas Mahoney (15:41.08)  from Xavier followed in second and Senior John Paul Naughton (15:44.45) of Villanova placed third.

200 Backstroke – Andrew Carbone of Georgetown sped to gold with a time of 1:45.41.  Taylor Kauth of Seton Hall (1:46.35)  followed in second and Justin Cucchi of Villanova (1:46.58) took third. Andrew Carbone and Tyler Kauth both had NCAA “B” qualifying times.

100 Freestyle –  In one of the closest races of the evening – Dakota Williams of Seton Hall  out-touched teammate Noah Yanchulis (23.23) with a winning time of 23.25  Vadim Jacobson completed the sweep for Seton Hall with a time of 23.18.  Williams time was an NCAA B Qualifying time.  This event put Seton Hall Men in the team lead for the first time this week.

200 Breaststroke –    Josh Tosoni of Seton Hall was first to the wall with a time of 1:59.41.  Matthew Dyer of Xavier (2:00.32) was second followed by Tyler Nussbaum of Villanova (2:00.63) for third.  Tosoni’s swim was a NCAA B qualifying time.  Villanova’s depth in this event put them back out in front of Seton Hall.  It looks to be an exciting finish with only three events remaining.

200 Butterfly –  Matthew Zebrowski of Seton Hall touched out Justin Summers of Georgetown (1:50.38) with a winning time of 1:50.29.  Ivan Michalovic of Seton Hall finished third with a time (1:50.59)   A strong finish by Seton Hall put them back in the Men’s team lead with two events remaining.

Todd Michaels of Villanova was Men’s Big East Diving Coach of the Year.

Mike Tober of Georgetown was Woman’s Big East Diving Coach of the Year.

Elizabeth Miller of Georgetown was Woman Diver of the Meet

Michael Perra of Villanova was Men’s Diver of the meet

Final Team Scores at the completion of Meet – The 2018 Big East Swimming and Diving Championships:

Gerry Dunn is a “Diving Dad” and resides in Washington, D.C. Gerry continues to dive competitively and is Chairman at US Masters Diving. Want to share your thoughts? E-mail him at [email protected]