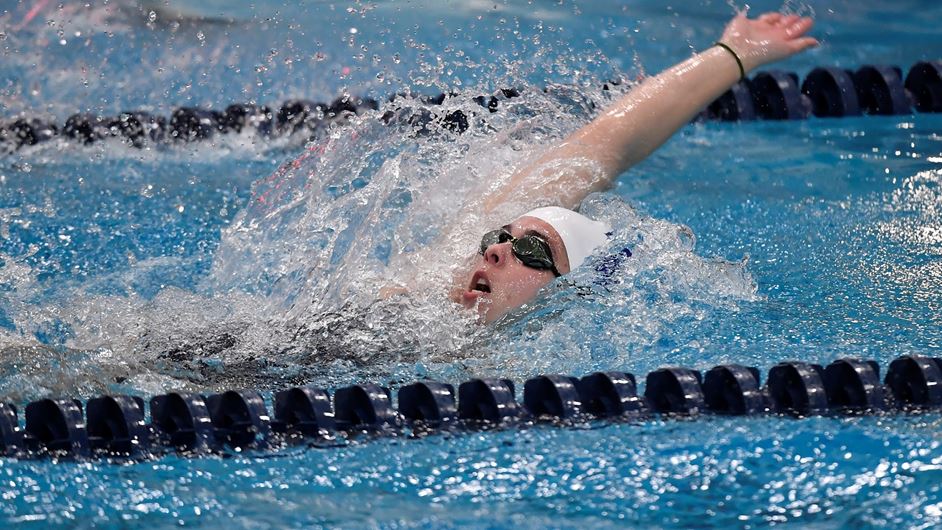 Villanova senior Kelly Montesi won both the 200 IM and 200 Back as the Wildcats toppled Rutgers in New Jersey on Monday. Current photo via Villanova Athletics

The Villanova Wildcats traveled across the Delaware River on Monday to challenge Rutgers and ended up playing spoiler the Scarlet Knights’ senior night, heading back to Philadelphia with a 133-108 victory. The meet featured a unique event lineup, with the 100s of stroke missing and the teams competing in the 400 medley relay as opposed to the 200 medley relay.

Villanova was led by a trio of swimmers who won both of their individual events. Distance swimmer Nicole Welch started off the day with a narrow win in the 1000, touching in 10:25.09, two seconds ahead of hard-charging Rutgers senior Cathryn Salladin. The two went head to head again in the 500 free, with Welch, a senior from Beverly, Massachusetts coming out on top again, 5:04.79 to Salladin’s 5:06.67. Welch’s season best in the 1000 sits at 10:07.05, while her season best 500 sits at 4:53.90, both from the West Virginia Invitational in November.

The final double winner for Villanova was fifth year senior Milly Routledge. The British native swept the sprint freestyles, winning the 50 free in 23.68 and touching first in the 100 free in 51.38. Routledge’s season bests also came in West Virginia in November, where she swam a 23.31 in the 50 and 51.12 in the 100 free.

Rutgers graduate transfer diver Abigail Knapton was dominant once again, sweeping both the 1 and 3 meter diving events. In the 3 meter, Knapton, who was a 6-time All American while at Nebraska, posted a score of 328.10. She later returned to win the 1 meter with a score of 279.85.