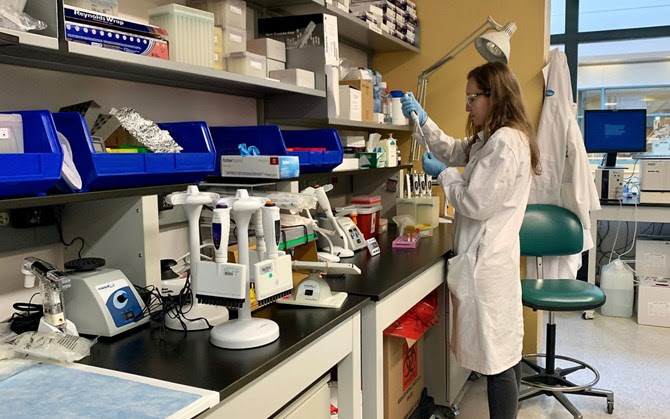 Dilli, a 2015 graduate, was a neuroscience major and back/IM specialist with the Catamounts. Current photo via Catamount Athletics

BURLINGTON, Vt. – In early April when we last checked in with Estee Dilli ’15, a former neuroscience major and member of the UVM Swimming and Diving team, she was preparing for her work at Pfizer to kick into overdrive. The senior associate scientist in New York would be developing an assay to measure the efficacy of a potential vaccine for novel coronavirus. Seven months later while at work on a Monday in November, Dilli watched breaking news flash on the atrium’s television: Pfizer announces positive efficacy results from COVID-19 vaccine candidate.

“It is really exciting, definitely, and it was kind of the first glimpse that things are finally starting to pay off. We definitely were really excited about that, but I mean, there’s still some work to be done,” she says.

With a 90 percent efficacy rate so far from Pfizer and BioNTech’s Phase 3 clinical trials, that’s really good – at this stage of typical vaccine development, the Food and Drug Administration (FDA) requires at least a 50 percent efficacy rate to continue with development. That early 90 percent is calculated by the number of trial participants – upwards of 40,000 – around the world who received either the vaccine or a placebo and then contracted COVID-19 later. Of those cases, 90 percent are participants who received the placebo.

Things have been moving at breakneck speed, with tests running around the clock and in real-time. In fact, some clinical samples were helicoptered in to Pfizer so they could be tested the same day. This – along with support from their German partner BioNTech and working in lockstep with the FDA – Dilli notes, is how they’ve been able to achieve something in mere months that typically takes years.

“Really nothing has been cut short, it’s just been expedited and everything still is completely reliant on FDA approval. So that is ultimately what’s going to make that final decision and they have been incorporated every single step along the way,” she says.

Moving forward, Dilli and her team are now shifting gears to measure manufacturing consistency to ensure each and every lot of the vaccine is composed exactly as they should be. While that happens, Pfizer waits for the FDA to release the rest of the Phase 3 results to calculate a final efficacy rate, and continues to monitor Phase 1 and 2 participants.

“They’ll probably be enrolled in this for up to maybe two to three years and just seeing how long these antibody and vaccine titers will last,” Dilli says. “Sometimes you need a booster shot down the line with this type of thing, so that’s another thing that we still need to monitor.”

Since the news broke about a possible vaccine, reports have emerged that it may be ready as early as next spring for the general public. And if and when it is, Dilli won’t hesitate to get it. “I can’t wait,” she says. This will be the first time she’s used a Pfizer product that she helped develop. A once-in-a-lifetime experience: “It really has been an incredible opportunity and it’s really been a big, big learning experience,” she says.