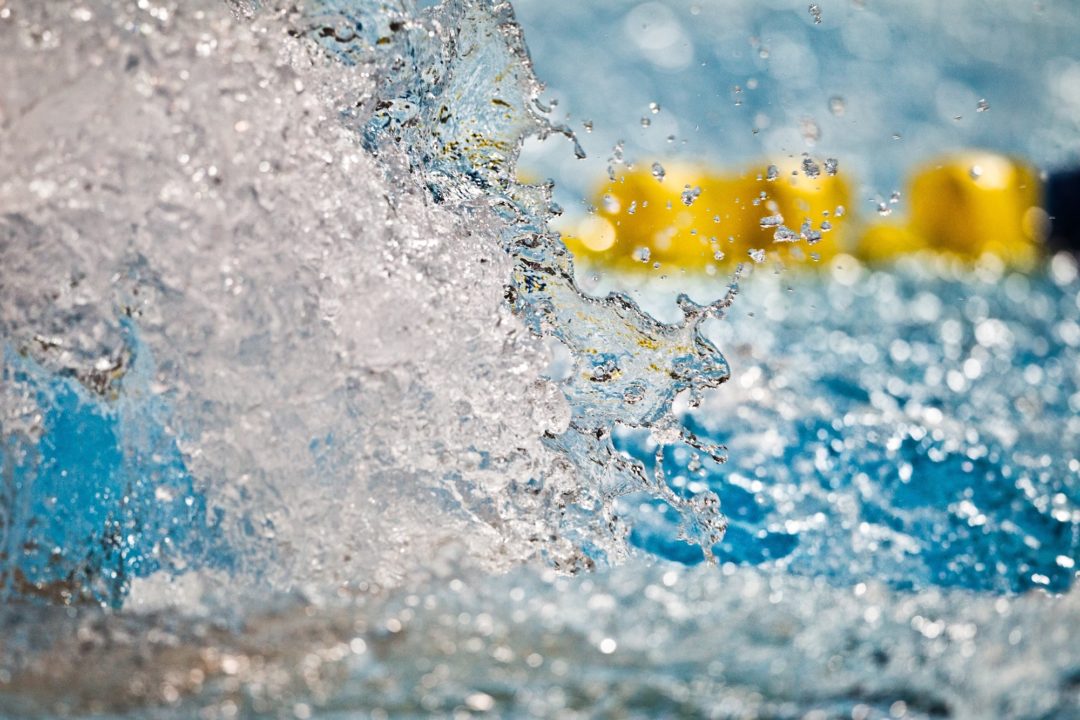 The Dutch men might have a new gold medal contender for this summer's European Championships. Stock photo via Tim Binning/TheSwimPictures.com

Saturday, though, was more of a split decision. Yes, the internationals overall got the better of their hosts, but the Dutch held their own on this day with a National Record and some other highly-rated swims.

While that time for Joensen isn’t much, he tends to swim this, his best race, very sparingly in-season, so it’s hard to ever put too much weight upon those few in-season races. In long course, he swam it only twice in-season in 2013, once in 2012, and once in 2011.

After that swim came the semi-finals of the 50 breaststrokes, which in European style would roll into the finals at the end of the same session.

The Netherlands’ Moniek Nijhuis had the top seed in the semi’s, but as Sweden’s Jennie Johansson improved to a 30.73 in the finals, Nijhuis’ drop to 30.93 wasn’t enough to get her for the win.

Both will get some confidence, though, from beating Denmark’s Rikke Moeller-Pedersen (31.08), who is one of the hottest breaststrokers in the world right now.

There were only three Dutch swimmers in this final, led by 5th-place finisher Timon Eventhuis.

The Dutch have been known for great women’s swimming in the past decade, but that has been mostly in the sprint races, and certainly not in this 200 fly. Van Rouwendaal’s swim broke the record set in 1988 by Conny van Bentum at 2:12.33 (and even van Bentum was more of a sprint freestyler, having won only a single major medal in the 200 fly, but quite a few in the 50, 100 and 200 freestyles).

The Dutch women couldn’t even catch a break in the women’s 100 free semi-final, though expect them to really show up in finals. There, Sweden’s Sarah Sjostrom swam a 52.87 for the top seed, which is just .06 seconds away from her lifetime best and National Record in the event. A great field sits behind her: home-country swimmers Femke Heemskerk (53.39) and Ranomi Kromowidjojo (53.77); Denmark’s Jeanette Ottesen (53.89), Sweden’s Michelle Coleman (54.01), Denmark’s Pernille Blume (54.19), the Netherlands’ Inge Dekker (54.37), and Sweden’s Louise Hansson (54.76) advanced to the final. If one were to take out over-entries from a single nation, that could be a European Championships final this summer.

Among those missing the final were Maud van der Meer, hoped to be the next big sprint star in the Netherlands, and former 100 free World Champ Aleksandra Herasimenya, who were both 54.8’s.

Velimir Stjepanovic from Serbia took top honors in the men’s 200 free in 1:46.87. Stjepanovic is best known as a 200 butterflier, but in that race he broke his 10-month old National Record in the event. He also bested the Netherlands’ best male freestyler Sebastiaan Verschuren, who was a 1:47.21 for 2nd.

Taking 3rd in that race was 20-year old Dion Dreesens, who has spent some time in 2014 training in the United States with the likes of Ryan Lochte and SwimMAC Carolina. Dreesens swam a 1:47.79, which is faster than he was in all of 2013 and is within two-tenths of his career best.

The Dutch did grab two wins toward the end of the day (the last two events before the 50 breaststrokes), which were their first two of the day. After her record in the 200 fly, Sharon van Rouwendaal swam a 4:09.18 to win the women’s 400 free by a hefty four second margin. She actually negative-split the race, going out in 2:04.9 and coming back in 2:04.2, and based on her pacing by 100 it looked like that was her intent:

And finally, Joeri Verlinden swam a 52.03 in the men’s 100 fly to beat Evgeny Korotyshkin of Russia and the ADN Swim Project. That catapults Verlinden into the top spot in the World Rankings in that event, which arguably makes this day a positive one for the Dutch despite overall being outshone at this meet.

In fact, that seems to be the story of this meet for the Dutch. While they aren’t winning many races, and they’re getting beat by a lot of internationals, they’re still swimming very, very well.

He may be a Europeans contender, but it’s a slow year so far for the 100 fly, can’t believe nobody’s been under 52 yet.

Sjoestrom’ freestyle is in jaw-dropping mode this week. I would be very surprised if she swims slower than 52.50.

Ironically, her fly was just Ok for her this week.

Aleksandra Herasimenya swam 54.8 and missed final? From world champion and Olympics silver medalist? Laying low in season and pop up blistering times in the summer just like in 2011 and 2012?
Maybe if you don’t swim in the final, you don’t need to produce sample for the drug testing.
I am still suspicious of that girl.

Le Clos is really picking up gold easy in this event.

Sjoestrom’ freestyle is in jaw-dropping mode this week. I would be very surprised if she swims slower than 52.50.

Ironically, her fly was just Ok for her this week.

Aleksandra Herasimenya swam 54.8 and missed final? From world champion and Olympics silver medalist? Laying low in season and pop up blistering times in the summer just like in 2011 and 2012?
Maybe if you don’t swim in the final, you don’t need to produce sample for the drug testing.
I am still suspicious of that girl.