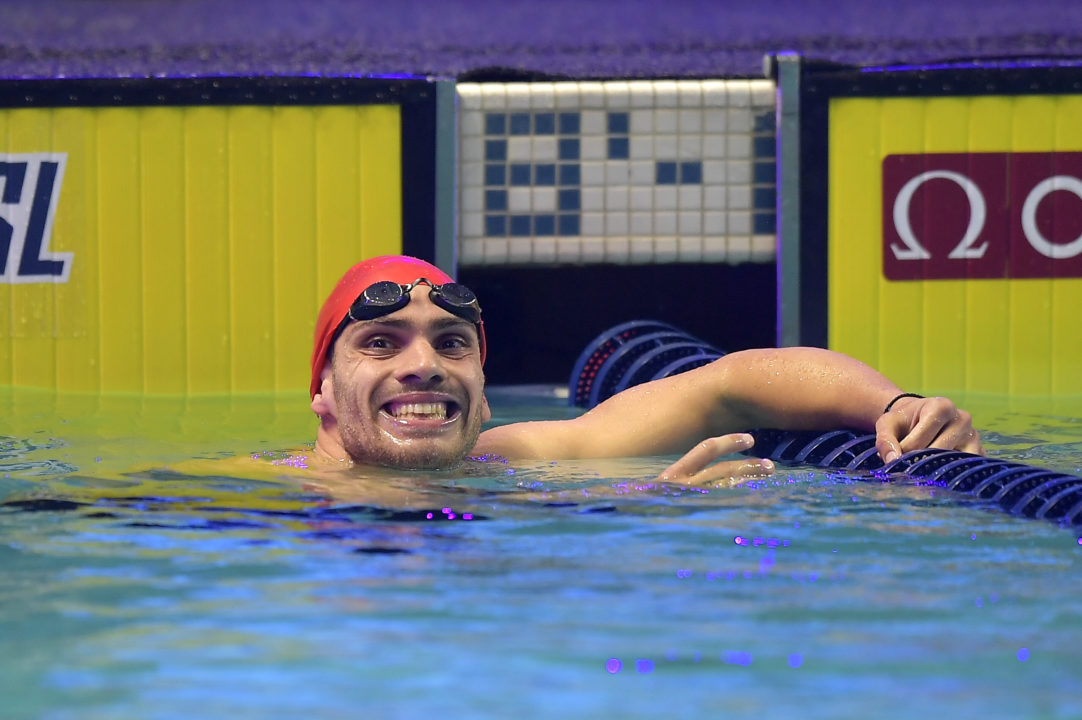 Despite Duncan Scott's 200m IM British Record in the heats, it was Greece's Andreas Vazaios who took gold in the event tonight. Archive photo via LaPresse - Fabio Ferrari

The 25-year-old Olympian Vazaios busted out a monster personal best of 1:50.85 to land atop the podium, clearing the rest of the stacked field by just under a second. In doing so, Vazaios blew away the previous European Record of 1:51.36 Hungarian Olympic icon Laszlo Cseh put on the books at the 2015 edition of these European Short Course Championships.

Vazaios’ road to the podium here in Glasgow started with his 1:52.38 morning prelim swim, a new national record in itself. Splits for his morning swim included 25.12/27.17/32.51/27.58 to claim the 2nd seed behind British powerhouse Duncan Scott, who notched a new British national record of 1:52.33 this morning.

Vazaios was the silver medalist in this event in Copenhagen behind Heitz with a then-national record of 1:53.27. He had earlier taken the long course European Championships gold medal in this 200m IM event in London in 2016.

Not only did Vazaios make history by producing a new European Record, but his 1:50.85 swim now inserts him onto the list of all-time performers as slot #3. Only American Ryan Lochte has been faster with his World Record of 1:49.63, while Japan’s Kosuke Hagino is ranked #2 in his fastest time of 1:50.47.

was he as obnoxious celebrating this as he was winning a race at the ACC Champs?

Joking aside, congrats to him and that is beyond a fantastic swim. Can’t wait to see what he does later in the meet with the 200 Fly. Congrats again!!

It was definitely Vazaios, but I am just ribbing or roasting here. I can’t say I would react any differently if I ever did what he did.

I could also roast him for his broken English interview afterwards, but again… all in good nature and being that out of breath after a race my own interview would have probably sounded the same but only with more “4 letter” words.

thats what he said, essentially

Why talk about his broken English in interviews and about his obnoxious cheering then? He is the 3rd fastest performer in history and last i checked he was at “European Championships.” How terrible it is that his first language isn’t English……

Why would you try and “roast” a foreigner for having broken english? Very disrespectful and rude.

“Broken english” for you, “second language” for him. Now, let’s hear your Greek!

You’re such an obnoxious UVa fan.

Nah I think he is talking about Zach Harting out of any ACC B final….