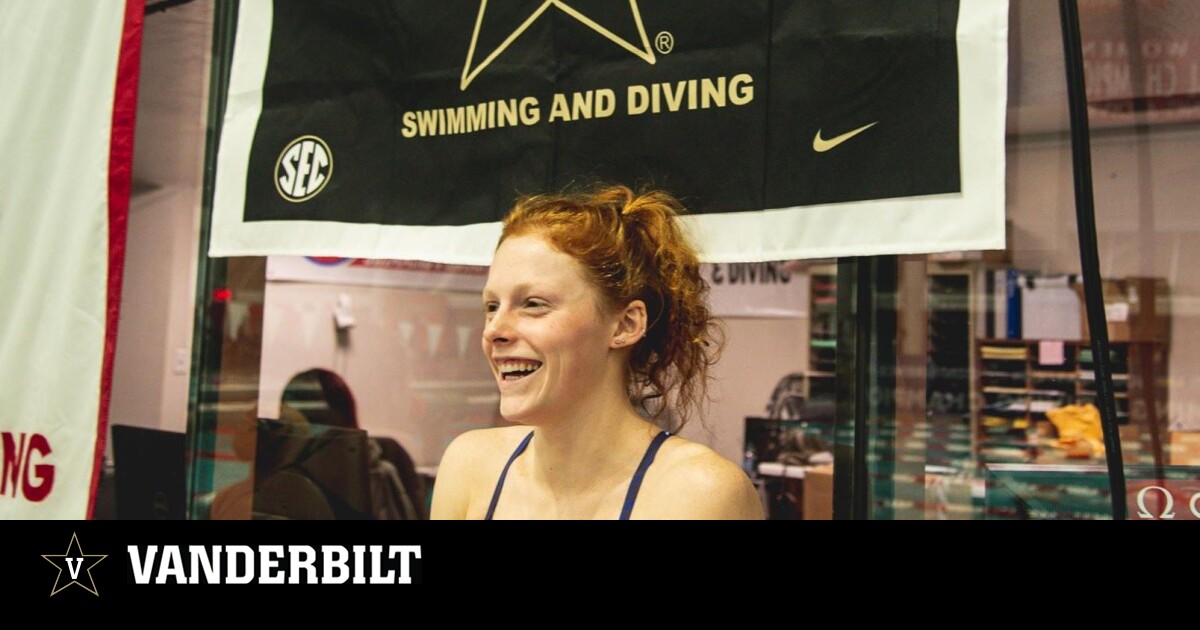 A big relay leg by Tonner Debeer, added to a pair of individual wins, helped boost the Vanderbilt Commodores to an 8-point win over mid-major power FGCU. Archive photo via Vanderbilt Athletics

The FGCU Eagles took Vanderbilt down to the wire, but the Commodores finished 1-3 in the final relay to seal up an 8-point margin on Saturday on the road in Fort Myers.

Neither team wore technical racing suits for the meet.

It was the 2nd matchup in 3 seasons between Vanderbilt of the SEC and FGCU, one of the top mid-major programs in the country over the last decade. In 2019, FGCU won 172-121 at home, but this year’s meet was much closer, and swung in Vanderbilt’s favor.

FGCU led at the halfway mark, but a 23.33 third leg from Tonner Debeer of Vanderbilt, the fastest split of the field, pulled the Commodores into the lead. She handed to Chantal Jordan, who anchored in 23.39, and Vanderbilt’s back-end eventually pulled away to win 1:34.15-1:34.90.

That win secured the meet, with 2 more points for a third place finish added on for good measure.

Halmai raced on a mixed medley relay for her native Hungary at the Tokyo 2020 Olympics.

Among the best individual performances for the victorious Commodores was a 1:52.89 from Eleanor Beers in the 200 free. That led the field by over two seconds, and was half-a-second better than she swam last week against Arkansas and Drury.

After spending the summer training back home with the Bainbridge Island Swim Club in Washington, she was also four-tenths faster in the 100 free (52.51) than she was at a dual meet a year ago today, which was the team’s opener (52.69). She was 3rd in that event, behind Florida Gulf Coast’s Brittney Pike.

Vanderbilt is now 2-1 on the season in dual meets. They’ll race again in two weeks against Illinois. Florida Gulf Coast is 0-1 in dual meets, though they did win the North Florida Invitational in their season-opener. They race again on Friday, Oct. 22 against Miami.

I low key feel like this is a big win for Vanderbilt. FGCU is a great program and has qualified individual swimmers and relays for NCAAs and are a fast rising program. While Vanderbilt is a power 5 school, to the best of my knowledge they have not had any NCAA success recently. Great meet by both schools!

Big fan of the tech suit disclaimer within all the meet articles. Maybe a techsuit-free meet could have a specific logo to put in the title. Someone notorious for their brief times or practice times could be the inspiration for the logo.

are there a lot of college dual meets done with tech suits? I did not think that was the case, but maybe that is changing?

It was very much a trend a few years back. It seems like, so far this season, that the trend is shifting. Not sure if that’s a change in economics, or coaching theory.

I was kind of surprised to read about a least one college program that does some training sets in tech suits. These coaches feel it is important for swimmers to learn to swim suited, and how the tech suits impact their buoyancy and optimal swimming. When Caleb Dressel was trying his unofficial sub20 second challenge in a supersuit, he remarked about how differently he felt in the water. It seemed like, if had more practice in that suit, he could have gone faster.

If this sort of thinking becomes more common, I wouldn’t be surprised to see more swimmers suited at lower stakes meets.

Probably not, but there’s invariably a question in the comments with regard to whether a quick time was suited or not