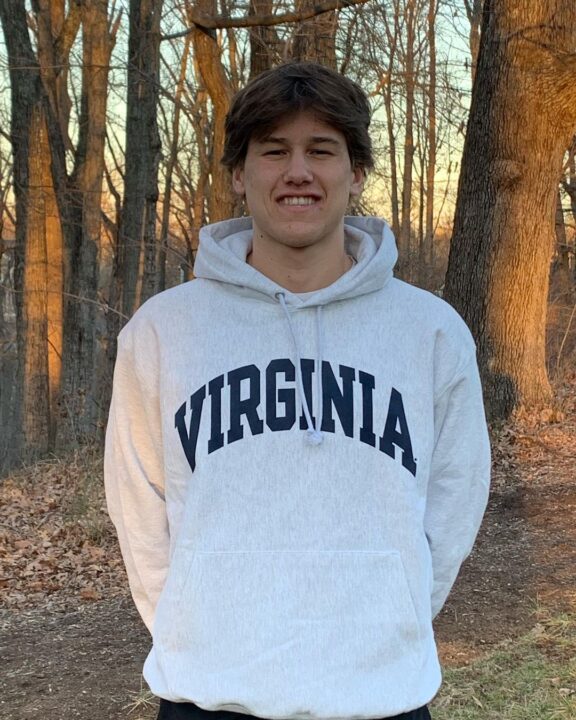 Matthew Heilman, a local Charlottesville swimmer, has committed to swim for the University of Virginia beginning fall 2022.

High school senior Matthew Heilman has announced his commitment to the University of Virginia. The local Charlottesville product is expected to arrive in the fall of 2022.

Matthew Heilman is the older brother of Thomas Heilman, who has broken over a dozen National Age Group Records in the last year as a 13-14.

His best events are not on the high schools schedule: the 400 IM and 200 breast. He swam those races, along with the 200 IM and 100 breast, at the Speedo Winter Junior Championships – East in December. There, he qualified for the C Final in the 200 breast, placing 22nd overall.

His shift to those longer events began more moving out of the pandemic, which coincided with Gary Taylor, best known for his work with distance athletes, taking over as the program’s head coach.

Heilman’s best times are slower than the typical recent Virginia recruit, but his progression (and his proximity to the school) makes him a potential developmental pickup for the Cavaliers. The men’s and women’s teams already have two other local athletes on their roster – August Lamb and Athena Vanyo.

Interesting question regarding Thomas. I remember as a younger kid I didn’t want to be a “copy cat” and follow in my older brothers footsteps. I wonder if he will decide to test the waters with different college experiences or follow the path of his brother

Obviously any coach will look down the family tree. Yes, it increases your chances of landing a potentially generational recruit but big bro is showing solid progression with a high genetic upside. Matthew may have had a later start. He starts crushing it, is really happy because of it, and talking it up to his brother? Win win win!

45
-5
Reply
Slower than You
Reply to  Lil Swimmy

It definitely helps recruit him, but there’s no guarantee Thomas will go there just because of family ties. I wouldn’t be surprised if they attend different schools a la the Lasco brothers (Destin’s older brother is at Lehigh).

3
-4
Reply
CavaDore
Reply to  Slower than You

UVA has had a lot of top notch sibling duos on the team in the past 15-20 years- Fran and Claire Crippen, Luke and Caitlin Anderson, Lauren and Meredith Perdue, Zach and Josh Fong, Alex and Gretchen Walsh…some that come to mind. Maybe Thomas and Matthew will join the list.

Ella Nelson pathed the way for the Walsh sisters. I was actually surprised that the three did not follow Allie Rabb.

I don’t think any of those Nashville swimmers is regretting their decision . . .

And before Ella there was JUlia Jane Eskew! Ella decided on UVA because of Julia, Alex followed Ella, and Gretchen followed Alex. One can argue that recruiting Julia might have be one of the best decisions UVA made!

But Teresa Crippen went to Florida, so I think everyone still looks at the right place for them. Kaitlyn Harty went to TX and then transferred to TN to find the right place for herself. I know when I was looking at colleges, and did the same events as my older brother, he told me that it was his school and his experience and I needed to go look elsewhere.

4
0
Reply
Anonymous
Reply to  Slower than You

I would think it would depend on how Matthew likes it at UVA. Do they have what he wants academically? How is he treated by the coaches, support staff, etc.

Does he train at UVA pool?

CYAC does not train at the UVA AFC

is that 200 br time correct for his sophomore year?

As far as we can tell, it is. He only swam the event once – showing that it was not a priority race for him at the time.

Let’s call a spade a spade- smart move on the UVA’s coaching staff’s part because this could open the door to securing a verbal from Thomas Heilman in a couple years.

Probably why the old coach was forced out to bring Gary in too.

What makes you think Mike was forced out

Congrats Matt! he has potential to drop major amounts of time at UVA next year in his events looking forward to watching him.