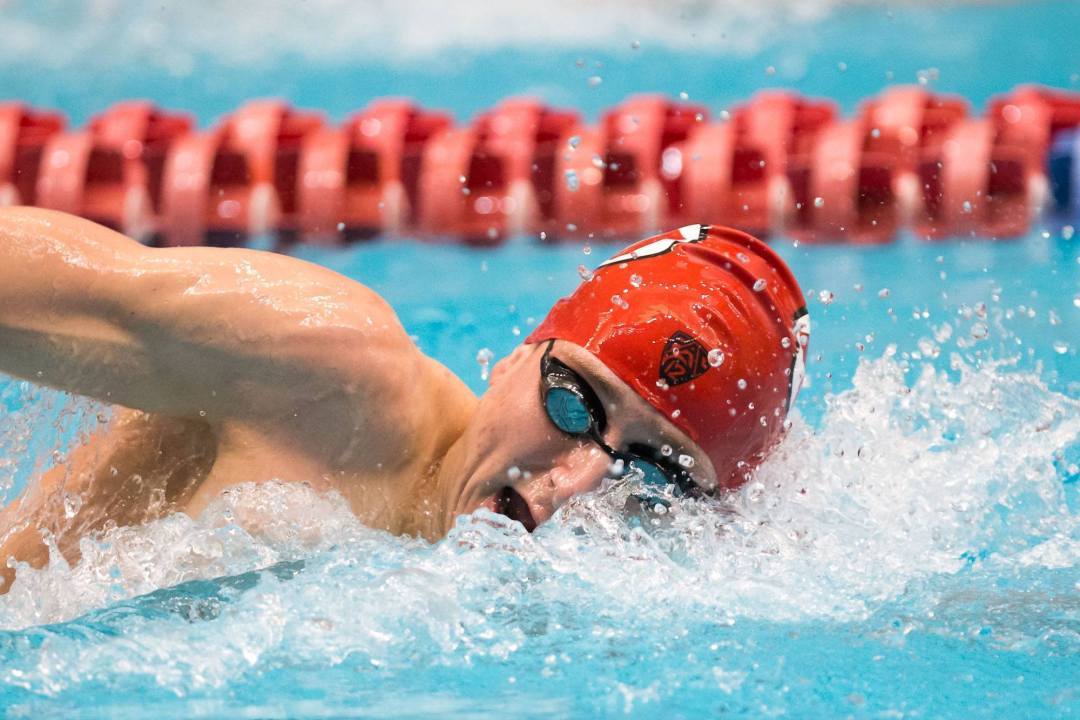 The Utah Utes got triple wins from Kristian Kron and managed to limit the top Denver Pioneers enough to win a home meet handily, while the Pioneer women rolled to an 8-point road win on three Sam Corea victories. Archive photo via Tim Binning/TheSwimPictures.com

The Utah Utes got triple wins from Kristian Kron and managed to limit the top Denver Pioneers enough to win a home meet handily, while the Pioneer women rolled to an 8-point road win on six combined Sam Corea and Maddie Myers victories.

One of the best showdowns of the men’s battle came between distance swimmers Dylan Bunch and Bence Kiraly. Each man is the fastest distance swimmer in history for his respective school, and the two NCAA qualifiers clashed in both the 500 and 1000 frees. It was Bunch who had the edge on this day, winning both races over Kiraly to keep Denver in the hunt.

Soedel also won the 100 free (44.41), but the big hitter for Utah was backstroker Kristian Kron, who won three different individual events on the night.

Kron swept the backstrokes – his closest test came at the beginning, when Ray Bornman of Utah pushed him down to a touchout in the 100 back. Kron trailed at the 50 but came back to win in 50.62 to Bornman’s 50.89.

Kron had a somewhat easier road in the 200 back, though things still came down to about a half second. Kron won in 1:49.42 and once again had to come from behind in the back half. Finally, the junior from Sweden took the 400 IM in 4:00.13 to seal the win for Utah.

With Soedel forgoing the 50 free to challenge Bunch in the 200, the Utes relied on senior Alex Fernandes to hold down the sprint event, and he came up big with a 21.13 win. Fernandes would also take the 100 fly later on in 49.11, beating Denver’s Andrew Torres.

Torres, who competed for Puerto Rico at the Central America & Caribbean Games last year, was able to win the 200 fly, going 1:51.42.

On the women’s side, the Utes and Pioneers had a spirited battle that came down to just 8 points at the end.

Denver started out hot, sweeping the first four events. That included two big wins each from senior Sam Corea and sophomore Joanna Roas. The two were the difference-makers on the 400 medley relay, with Corea putting up the field’s fastest backstroke leg (55.71) and Roas doing the same on fly (54.88). The team went 3:46.75.

Those three were the difference-makers for Denver, with Myers and Corea winning three individuals each and Roas taking two.

Utah fired right back, though, winning the next three races. That started with All-American breaststroker Stina Colleau, who won the 100 breast in 1:05.12 and led a 1-2 for the Utes.

But Denver’s big trio came up big at the end, sweeping 5 of the last 6 individual swimming events between them to seal the win. That included back-to-back wins from Roas (100 free, 51.33) and Corea (200 back, 2:02.78) and then two Myers wins within the last three swimming events.

Using up all of Corea and Myers’ event entries before the final relay was a gamble, leaving Roas alone to hold together the 200 free relay. But it paid off, as Myers’ 400 IM win pushed Denver to 152 points, officially sealing the meet. That made a Utah win in the 200 free relay meaningless to the final outcome, and Denver took home a 156-144 win.