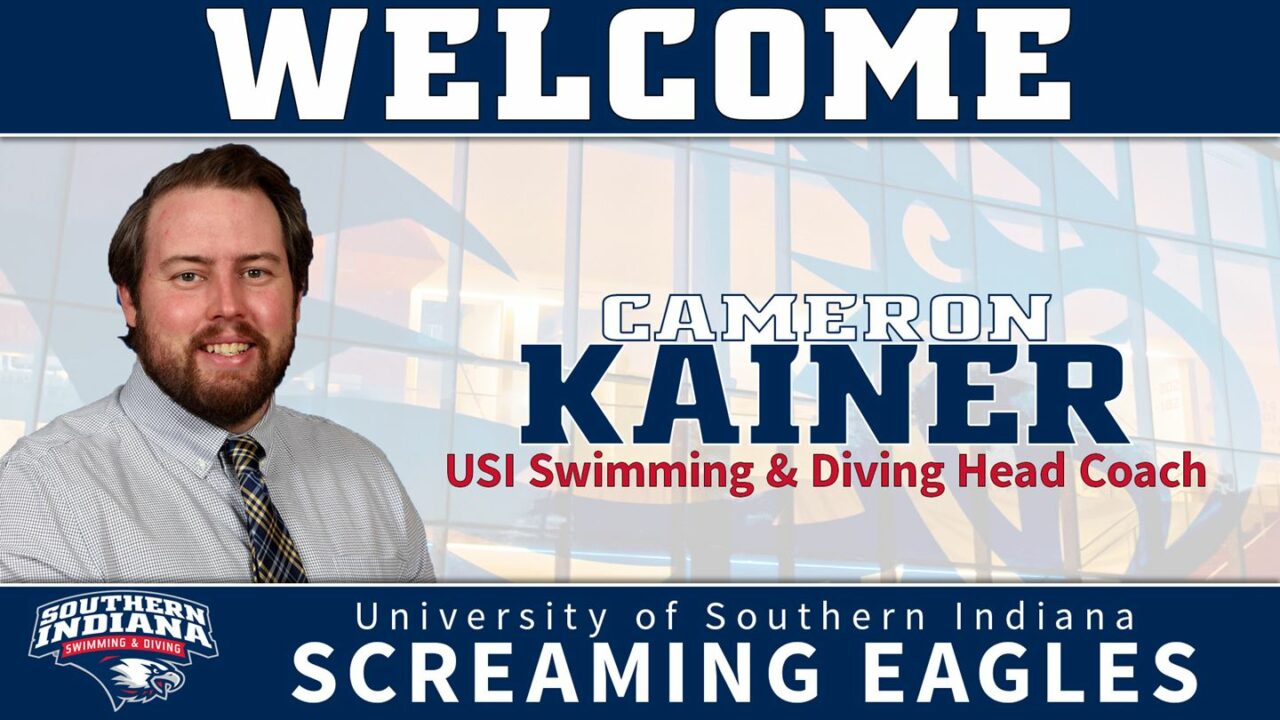 The University of Southern Indiana announced the hiring of Cameron Kainer as the head coach of the new program that is set to start competing in 2022-23. Current photo via USI Athletics

EVANSVILLE, Ind. – University of Southern Indiana Athletics announced the hiring of Cameron Kainer (Ki-ner) as the head coach of the new Swimming & Diving program that is set to start competing in 2022-23.

“USI is very excited to have Cameron lead our new programs,” said USI Director of Athletics Jon Mark Hall. “He has extensive experience at the Division II level as a student-athlete and coach. We believe that Cameron is the right person to build the foundation for USI Swimming & Diving.”

“I am very excited and blessed to be named the first head swimming and diving coach at USI,” said Kainer. “I have seen the success this department has had under the direction of President (Ronald) Rochon, and (Jon Mark) Hall and the commitment USI is making towards building its swimming and diving program.

“Seeing the new aquatic facility being built this past year made me hopeful that the addition of the team was imminent,” continued Kainer.  “I am so thankful USI made the commitment to add the program.”

“The swimming and diving landscape in Indiana and the Midwest is booming with talent and I look forward to recruiting the finest student athletes to represent USI and the Evansville community,” concluded Kainer.

Kainer comes to USI from the University of Alaska Fairbanks where he was the head coach in 2020-21. In his only season with the Nanooks, he led Alaska Fairbanks to its first dual-meet win since 2018-19 and a 2-1 dual-meet record. The ‘Nooks also placed seventh in the Pacific Coast Swimming Conference (PCSC) Championships.

Kainer began his coaching career as an assistant coach at St. Lawrence University (2010-12) and Florida Institute of Technology (2012-13), in addition to serving as the head swim coach and aquatic director at Northwood Country Club (2012) and the Nitro Swimming national development coach (2013).

The native of Leander, Texas, is a 2010 UTPB graduate with a bachelor’s degree in communications and a 2012 graduate from St. Lawrence University with a master’s degree in educational leadership. Kainer, in the pool, was a two-year UTPB captain and competed in the 500-Freestyle, 1,000-Freestyle, 1,650-Freestyle, and 400-Individual Medley. He also was president of the UTPB Student Athlete Advisory Committee.