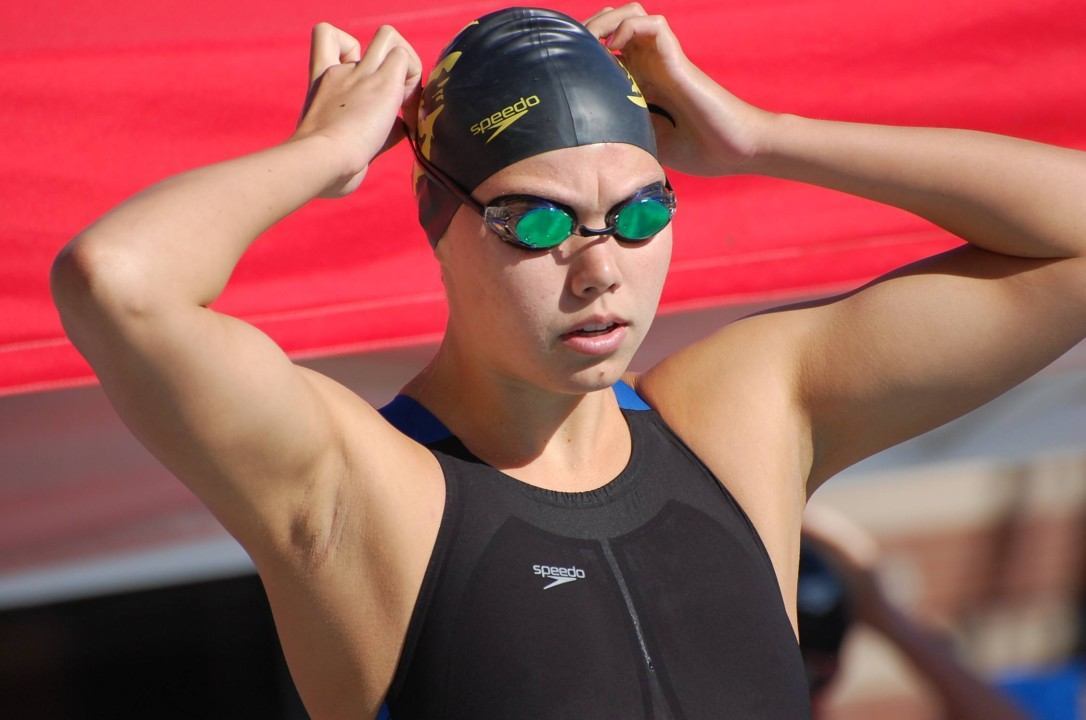 USC's Riley Scott pulled off a winning triple against Pac-12 rival Cal, but the Trojans ultimately fell to the Bears by 38 points.  Archive photo via Anne Lepesant

Cal’s Amy Bilquist was one of the Bears’ top performers, sweeping the backstroke races ahead of teammate and reigning NCAA champ Kathleen Baker. In the 100 back, Baker (52.71) led up front with a 25.69 split, but Bilquist (52.68) chased her down to win it by just 3 hundredths. They were nearly even through the front half of the 200 back, with Baker taking a slight lead after the 3rd 50, but Bilquist hammered home once again to win by hundredths in 1:54.97 to Baker’s 1:55.02.

LOS ANGELES – Amy Bilquist, Katie McLaughlin and Briana Thai claimed two events apiece and Cal swept both relays as the Golden Bears won at USC, 169-131, Friday – the team’s first victory on the road in the series since 2012.

“I thought we did a nice job of handling traveling, being ready to go and racing well against a strong USC team,” said head coach Teri McKeever, whose squad flew from the Bay Area to Los Angeles early Friday morning. “We responded well after the first break, focusing and staying tough.”

Cal, which improved to 8-0 on the year, started off with a narrow victory in the 200-yard medley relay, as the Bears’ McLaughlin out-touched the Trojans’ Marta Ciesla by .64 seconds at the finish to prevail in 1:38.24 – Cal’s fastest time in a dual meet so far this year.

Bilquist earned victories in both backstroke events, taking the 100-yard race in 52.68 and the 200-yard race in 1:54.97. In both cases, Kathleen Baker was a close second, while Courtney Mykkanen was third at the 200 distance.

Thai and Phoebe LaMay were the top two placers on both the 1-meter and 3-meter springboards, with Thai edging her teammate by three points both times.

Senior Noemie Thomas was the only other Bear to win an individual event, claiming her specialty – the 100 fly – in 51.74. Sophomore Maddie Murphy was right behind in 52.43.

The Bears return to action Saturday, visiting UCLA for a noon meet, and they conclude the regular season at Stanford on Saturday, Feb. 10.

Junior Riley Scott won three races and sophomore Louise Hansson won twice to lead the No. 9 USC women’s swimming and diving team, which fell for the first time this season in a 169-131 loss to No. 3 California on Friday (Jan. 26) at the Uytengsu Aquatics Center.

USC posted its second-fastest 200y medley of the season to open the meet with senior Hannah Weiss, Scott, sophomore Catherine Sanchez and Ciesla going 1:38.74, second to Cal by 0.54. The Trojans’ 400y free relay of Hansson, Ciesla, Sanchez and senior Lexie Malazdrewicz was second in 3:19.40, also second-best on the year.

Cal’s Amy Bilquist and Amy Baker went 1-2 in both the 100y and 200y back events, the latter leading a 1-2-3 finish. The Bears also took the top three spots in the 500y free, led by Katie McLaughlin. McLaughlin also won the 200y fly with Trojan junior Maddie Wright fighting to second in 1:56.51.

Cal’s Briana Thai and Phoebe LaMay finished first and second in both the 1-meter and 3-meter springboards. Junior Maddie Witt led USC on 3-meter (285.60) while sophomore Carly Souzatook third for USC on 1-meter (285.53), just 4.2 points out of first.

USC hosts No. 2 Stanford on Saturday at noon as the Trojans honor Weiss and Malazdrewicz on senior day.

Has anyone else noticed Katie McLaughlin’s sprint splits this season?!?!? They’re pretty good!

Cal is strong in the back, fly and free.

Who do they have for the breaststroke?

They haven’t had anyone who can do much in 50/100 since Jessica Hardy many years ago.

They had Caitlin Leverenz too

….who was on all their medley relays

It’s a real bummer when you have to use the freakin 50 free American record holder as your breaststroke leg!

Bummer, but Weitzeil’s 50 Br’s pretty decent for a sprint freestyler! Well Baker can kinda fake it too if called upon 🙂

I’d give freshman Harrison a season or two, she’s fast improving. Darcel’s more of an IMer but could work in a pinch with more development.

Cal also has Roses, Dilsaver, Buckley, Tuck & Skorus-Neely on the roster for breast. Additional help will flow in next year with Rajic.

Now if they can just land Walsh for 2020…that 58.19 of hers sure would work wonders for the Golden Bear’s medleys 🙂

Baker had a sub 100 breast pre-college. Can’t swap out her current events trifecta for that at NCAAs.

But maybe you could have Bilquist swim the back on the relays?

Not sure why I got downvotes for being correct…link: https://swimswam.com/bio/kathleen-baker/#best-times

You got downvotes cause your initial comment didn’t make sense… I think you were trying to say, “Baker had a sub minute 100 breast pre-college”, not “sub 100 pre-college”

I thought USC women would be better this year?