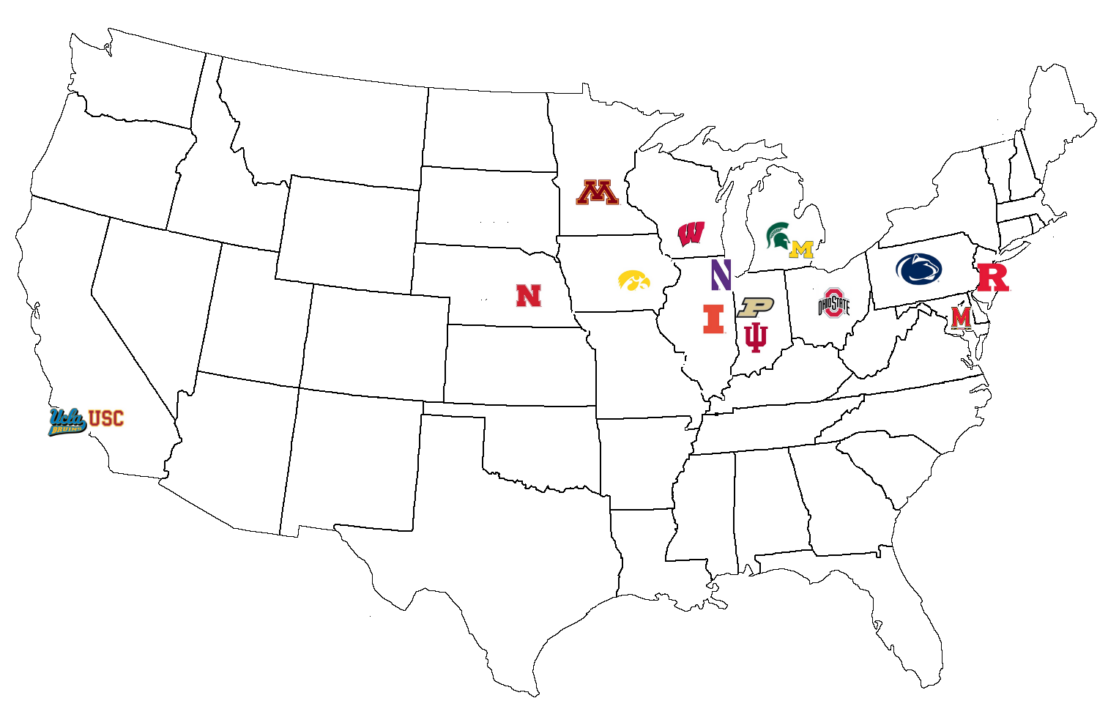 USC and UCLA are reportedly leaving the Pac-12 for the Big Ten as early as 2024 in a move that figures to have major ramifications for college sports – especially non-revenue ones.

According to Jon Wilner, the move “has not been finalized at the highest levels of power,” but The Athletic’s Nicole Auerbach reported that it’s all but wrapped up and could be announced officially today.

One Big Ten coach told SwimSwam that the rumors were “credible.”

Multiple sources told The Athletic’s Bruce Feldman that the two Pac-12 schools were the ones to approach the Big Ten about switching conferences. Sources told the LA Times’ Ryan Kartje that USC was the driving force behind the move, which will reportedly include all sports except for beach volleyball. It’ll be a huge financial boost for UCLA, which posted a record $62.5 million deficit last year.

After the SEC added Oklahoma and Texas last summer, the Big Ten reached a handshake agreement with the Pac-12 and the ACC to not poach each other’s members. It didn’t last long.

USC and UCLA could experience a bit of a culture shock going from sunny West Coast playing fields to the snowy, gray conditions of the Big Ten. The geography of the new Big Ten – which will actually include 16 schools – now stretches nearly 2,800 miles from Los Angeles to New Brunswick, New Jersey. For non-revenue sports, the move is puzzling: Will USC really be flying out to Penn State for a Tuesday night soccer match? It’s yet another example that education is not the priority for college athletes as courts ponder their status as employees.

It’s also worrying news for the Pac-12, now set to become the Pac-10 again. And that’s if they can keep members such as Oregon, Washington, Utah, Arizona State, and others who might also be looking for a way out.

Some are already speculating that the Power 5 could soon become a Power 2 with 20 or more members in each conference. Revenue projections from March indicated that the SEC and Big Ten will nearly double the revenue of the Pac-12, ACC, and Big 12 by 2026 — and that is before the move of USC and UCLA, two of the Pac-12’s most valuable properties.

The Big Ten is currently negotiating its next media rights deal. Its existing deals with ESPN and Fox run through the next academic year, 2022-23. With the addition of USC and UCLA, the conference would effectively unify the No. 1, No. 2, No. 3, No. 4, and No. 9 television markets in the country.

Are we getting #krissed right now

Maybe it’s time for UCLA to bring back their men’s team.

I actually sat next to former UCLA AD Dan Guerrero on a flight from Los Angeles to the Bay Area back in spring 2007. UCLA was coming off of its second straight Final Four appearances in men’s basketball, and they had beaten #2 ranked USC in football that fall and thus knocked them out of a BCS Championship game. So things were going pretty well in the UCLA Athletics Department. I congratulated Guerrero and then inquired if, given the school’s recent success, they would consider bringing back the men’s swimming program. He told me that adding sports was always a topic for consideration, but he pretty much couched it in a way so that I realized he had zero interest… Read more »

Thanks for putting the bug in Dan Guerrero’s ear. I couldn’t have been so kind. In 1994 the final year of mens swimming, UCLA went to the Rose Bowl and won the basketball tourney the next year. Seemingly high financial times. Made no difference to the swimming program. Apparently the AD turned down a 6million dollar donation in ‘94, contingent on keeping men swimming. Poor financial management leads to selling-out and desperate moves later on. We know it’s about the money, so please just stop with the righteous propaganda about supporting the student athlete. -that one is directed at the ncaa

USC men seem behind the top tier of Ohio State and Indiana. They’re pretty equally hemorrhaging talent like Michigan. And may be at or slightly ahead of Purdue and Wisconsin? 3rd seems like the upside, but could see as low as 6th.

USC women seem a half step behind Ohio State, Indiana and Michigan (though Michigan women seem more in shambles than USC). Probably pretty equal to Wisconsin and Northwestern at the top level but maybe have more depth at the conference level?

UCLA women seem like they may struggle, but a borderline top 8 or 9 finish seems like the best case scenario. Is this team better than… Read more »

It’s all about tv rights and the number of homes watching games. Same reason A&M and Missouri went to the SEC

Those are at least RELATIVELY close to the other competitors in the SEC. This is across the country.

Yep. Three words: follow the money. Specifically follow the football money and TV revenue deals. Texas and Oklahoma are bitter rivals but saw the financial benefits in partnering to ask to join the SEC. Same for LA rivals USC and UCLA now wanting to join the Big10. LA is a huge media and recruiting market and local schools ( abiding by ex PAc12 commissioner Scots desire for parity) USC and UCLA had to get the same revenue as Washington State and Oregon State who have 40,000 football stadiums.

Some people have actually left LA for some parts of the Midwest like Carmel/Indianapolis, why do you think they have such a good high school team. The problem of the Midwest is losing out to places like Texas. Chicago lost Caterpillar to Irving Texas. The Midwest needs to get some industry going like Texas or Arizona. Arizona just open a new chip plant. The problem with LA is most of the population is now being driven to San Berandino or Riverside because of rent. In fact during 2021 Riverside gain 30,000 and LA lost 90,000 if you are driven to the Inland empire you might as well try some of the Midwest, but the Midwest needs some development mainly not… Read more »

I remember reading two or three years ago that each member school’s share of the Big 10 TV Channel’s revenue was something like $40 million. It’s probably even more these days. I doubt that the Pac 10 Channel paid even a quarter of that to their schools.

I honestly thought this was an April Fools
joke , two months late.
It just doesn’t make sense for non-revenue sports. Think of the travel logistics? USC/UCLA might as well buy a Boeing or two and start an airline !!!
What a mess !

How can you be conflicted? This is absolutely idiotic.

If I was an athlete considering those schools, I’d hard pass. I’m not traveling across the country for every game. Makes no sense.

As part of the Big Ten, the annual financial payout to USC & UCLA will be over $100M compared to approximately $34M for staying in the PAC-12. That should solve a lot of UCLA’s money problems.

Never getting a deal with Directv for the PAC-12 network remins an albatross for the conference. And yes, Larry Scott is responsible for that. This would also make the Big-10 the “Conference of Champions.” as UCLA has 119 (#2 all time) total team NCAA Championship wins and USC has a total of 111(#3 all time). Both trail Stanford at 131, but that’s still a massive pickup for any conference.