USC AD Pat Haden Bringing the “Scholar” Back to “Scholar-Athlete” 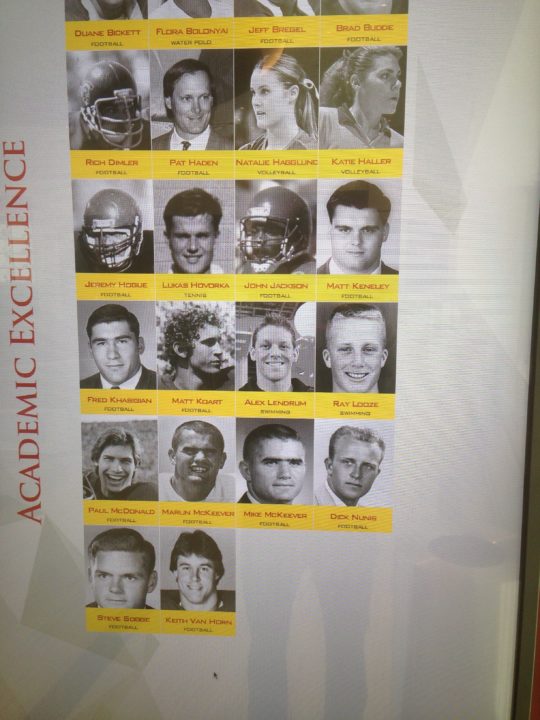 Gniotczynski returns to Carroll after numerous head coaching stints in the area, including the head coach at the YMCA at Pabst Farms Swim Team in Oconomowoc.

“These incoming students fit very well with our philosophy and I am very excited to welcome them to the family,” said head coach Nick Wyllie.

In addition to the huge remodel of the former McDonald’s Swim Stadium, soon to be unveiled as the Uytengsu Aquatics Center, the University of Southern California (USC) has recently re-opened another big athletics remodel project – Heritage Hall.

The new Heritage Hall expanded from a 48,000 square foot space into a gorgeous 80,000 square foot facility that hosts a museum honoring the greats of USC athletic history – in addition to its pragmatic use as office space for USC administrators and coaches, a broadcast studio, a female student-athlete lounge, and a few performances spaces (an indoor golf driving range, etc.).

The Trojans have a lot of history to share, as the school with the third-most NCAA Division I National Championships in history – 99, and 120 overall collegiate national championships.

Obviously, there are plenty of swimmers represented in the museum: NCAA Champions like Vlad Morozov and World Record holders like Rebecca Soni; and coach Peter Daland who won 9 NCAA men’s team titles in the 1960’s and 1970’s are all featured prominently in the museum.

But this study of the new Heritage Hall didn’t begin, for us, with an inspection of an Olympic gold medalist.

The pair are the only swimmers in USC history to earn 1st, 2nd, or 3rd team CoSIDA Academic All-American honors, and that was enough to make the photo a nice picture for the SwimSwam Instagram account.

But as my eyes wandered upward on the display, another name jumped out: Pat Haden, the current USC Athletics Director, which turned the image into more than just a nice momento for two great scholar-athletes.

Haden is arguably the greatest student-athlete in USC history. He was the Trojans’ starting quarterback, was a part of two national championship teams, and had a 6-year NFL career, including one Pro Bowl on the field.

In the classroom, he was a Rhodes Scholar, which he turned into a broadcasting career after his NFL retirement in the 1980’s and had a long, successful career as a partner in his own private equity firm from 1987-2010.

And that’s where this story really becomes interesting.

The USC athletics program, with its incredible legacy, was struggling when Haden took over as the new Athletics Director in 2010. The school’s basketball and football programs were both embroiled in scandals that involved impermissible benefits to Reggie Bush and O.J. Mayo, and resulted in forfeitures of victories and many other severe punishments for the athletics department.

The ideal of the USC student-athlete, once so strong in the era of Looze and Haden, had taken a hit too.

Prior to the 1997-1998 season, USC earned 20 CoSIDA first team All-American honors. In 1995-1996, they had two first-team athletes, both of whom were football players. They had put an athlete on the Academic All-American First-Team 12 times in 14 years.

Beginning with the 1997-1998 season, during the tenure of former Heisman Trophy winner Mike Garrett, those awards became a bit sparser, though. They only earned 2 first-team honors in the following 16 years while their athletics department continued to grow

While this is not the only measure of an athletics program’s athletic success, it is a significant indicator of the ability to attract and develop students who are both highly successful athletes and highly successful students.

These CoSIDA awards represent the best-of-the-best in terms of academics and athletics.  For example, swimming is part of the “at-large” grouping, where 15 sports are combined to choose 15 men and 15 women for the first-team. In volleyball, 6 athletes from each division are chosen among thousands.

For an example of just how tough it can be to earn this honor, last year, nobody with lower than a 3.7 GPA made the men’s At-Large Academic All-American first team.

The number of schools who have ever earned three first-team honors in the same season could be counted on one’s fingers. Duke has done it, Stanford has done it, cross-town rivals UCLA has done it, Harvard did it once, but Princeton and Yale have never done it. And now USC has retaken its spot among the scholar-athlete elite.

While credit is due to all of the head coaches and academic staff of the athletics department, leadership starts at the top, coincidentally with the leader of the whole organization, and Haden has the credentials where it’s easy to point to him as a large factor in the turnaround.

As a bonus for everyone who made it this far: a sneak preview of the revamped Uytengsu Aquatic Center, that is set for a grand opening on the weekend of February 21st, courtesy of assistant coaches Catherine Vogt and Jeremy Kipp.

Good to hear that USC will honor it’s bona fide student-athletes and “rediscover” its heritage. Best wishes to the Trojans in this endeavor. Unfortunately, as noted, there is another aspect to Southern Cal’s heritage which has involved at times bypassing standards (academic and otherwise) to benefit on-field results. While SC would like to be associated with schools like Duke, Stanford, Harvard, et al when it comes to student-athlete achievement they are also rightly associated with schools like Alabama, Miami, Nebraska, and Ohio State when it come to breaking of rules. Listening to reaction from USC alums and boosters, it’s not clear to me that many were truly troubled about the “lack of institutional control” – except perhaps that SC got… Read more »

I’d have to concur that Pat Haden may be the greatest all around Trojan ever! The new aquatics center is opening Feb 21? Are you trying to tell us that it’s opening just in the nick of time for the dual meet against Utah?