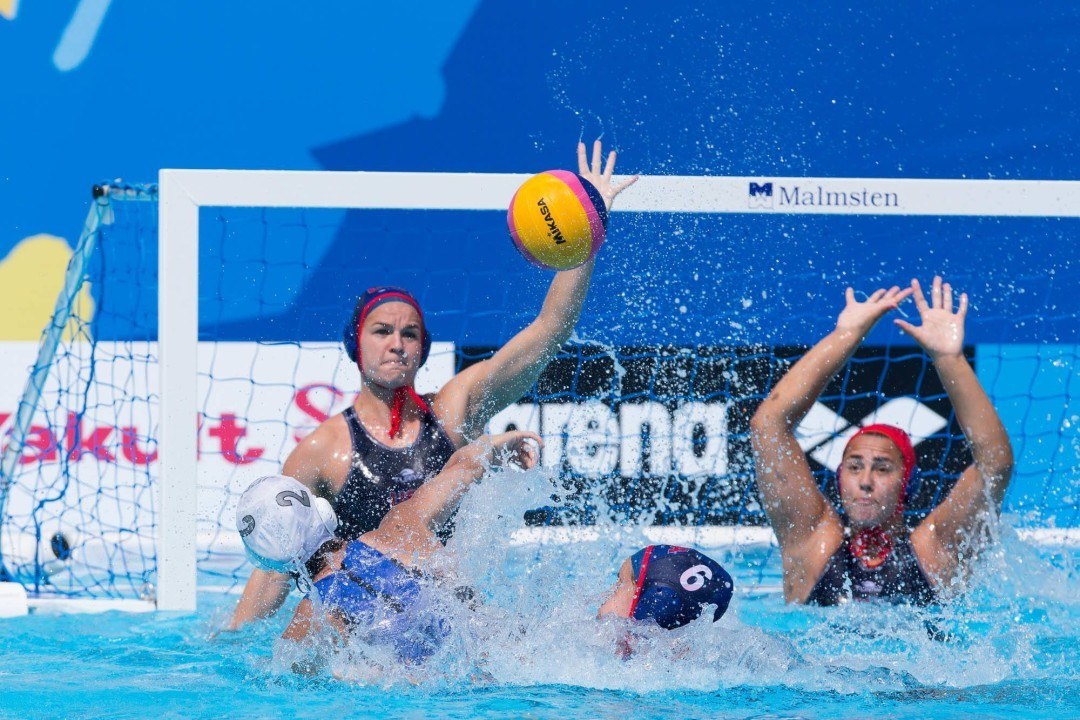 he USA Women's National Team moved to 4-0 at the Olympic Qualification Tournament and secured first place in Group A following a 15-7 win over Greece earlier today. Stock photo via Tim Binning/TheSwimPictures.com

The New York Breakers have a chance to make a statement in Match 4 of the ISL, but they’ll need vice-captain Michael Andrew to swim better to do so.

Gouda, Netherlands – March 24 – The USA Women’s National Team moved to 4-0 at the Olympic Qualification Tournament and secured first place in Group A following a 15-7 win over Greece earlier today. Kiley Neushul (Goleta, CA/Stanford/Santa Barbara) turned in a stellar performance scoring five goals, adding five assists and drawing three exclusions. Ashleigh Johnson did the job in net turning away nine shots and racking up five steals. The win leaves the United States with 8 points in group play meaning they can’t be caught from behind as Greece suffer their first loss of the tourney. Team USA closes out group play on Friday when they take on South Africa at 12:40pm local time/4:40am pt. The match will be webcast live and can be viewed by clicking here.

Today’s victory also set the time for Saturday’s quarterfinal match against the winner of a France/Germany match occurring late on Thursday, with Team USA playing at 12pm local time/4am pst. That match will be televised on NBC Sports Network on delay at 4:30pm et/1:30pm pt and also streamed live through NBC Sports. For more information, click here. For more information on the tournament, click here.

In the win over Greece it was Team USA setting the tempo early as Kami Craig (Santa Barbara, CA/USC/NYAC) scored in the opening moments on a skipshot for a 1-0 lead. Greece responded with a score to even the game at 1-1 but the United States came back with two more, one from Neushul and another from Makenzie Fischer (Laguna Beach, CA/Laguna Beach HS/SET) for a 3-1 advantage in the first. Greece mustered another goal not long after to pull within 3-2 but the rest of the quarter belonged to Team USA. In the span of two minutes Aria Fischer (Laguna Beach, CA/Laguna Beach HS/NYAC), Maggie Steffens (Danville, CA/Stanford/NYAC) and Neushul strung goals together to build a 6-2 advantage after the opening stanza.

Steffens and Neushul picked up where they left off to start the second, scoring consecutive goals for an 8-2 lead with 4:54 left in the half. After Greece cut into the deficit with a score Team USA responded with goals from KK Clark (Menlo Park, CA/UCLA/NYAC) and Steffens who scored on a power play. Ahead 10-3 the United States would go into the half with a commanding 10-4 lead following a late Greece goal.

The scoring slowed in the third quarter as only two goals were tallied. Rachel Fattal (Seal Beach, CA/UCLA/SOCAL) opened up the scoring for Team USA to take an 11-4 lead. Roumpesi added a goal in the final ninety seconds of the period for Greece but the United States remained in control up 11-5 going to the fourth.

In the fourth quarter Team USA put this match to bed. Neushul scored two straight, the second coming on a skip over the keeper’s head for a 13-5 lead with a little over six minutes to play. It became clear things were going the way of the United States when Clark’s attempt was field blocked into the net for another goal and a 14-5 lead with 5:20 left in the match. Greece scored two straight to pull within seven goals but Makenzie Fischer put the game on ice with a penalty shot in the late stages to secure the 15-7 win.