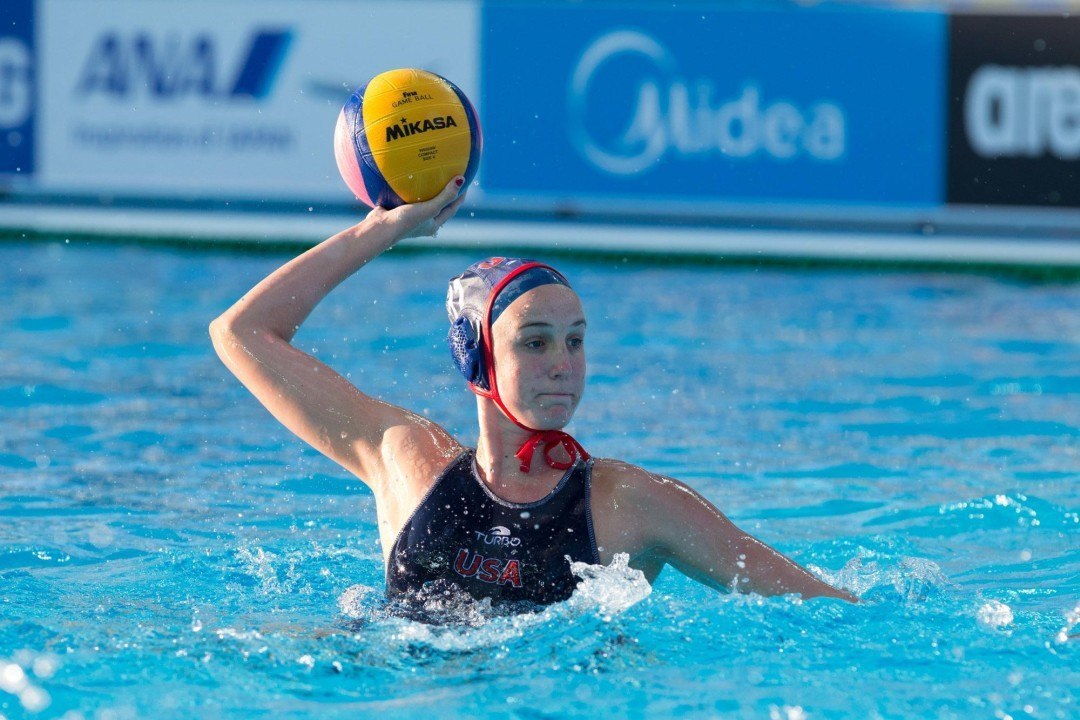 In other action, Puerto Rico topped Mexico for fifth place and Venezuela bested Peru for seventh.

Venezuela led 5-4 at the half, before pulling away with a 5-1 run in the third quarter en route to a 14-7 win over Peru to claim seventh place.

Samantha Torres scored three goals, while Yohanny Torres added two as Venezuela grabbed a 10-5 advantage with eight minutes to play.  Yohanny added two more scores down the stretch to make it 14-6 before Abigail Sirio Urquiza put in the final goal for Peru.

Samantha Torres and Yohanny Torres each scored four goals for Venezuela, while Alexandra Carangelo added a hat trick. The team made 40 percent of its shots (14 of 35), including 3 of 6 extra-player tries and 1 of 3 penalties.

For its part, Peru made 25.9 percent of its shots (7 of 27), including 3 of 10 extra-player tries and 0 of 1 penalties. Alisa Lopez Deza put in four goals to lead the Peruvian attack.

Puerto Rico never trailed Saturday en route to its fifth place finish at the Pan Am Games, clinching a 13-12 win by edging Mexico 3-2 in a penalty shootout.

Each team made its first shot and had its second saved in the shootout. Mexico’s Alcione Murrieta Pedroza then hit the post, while Puerto Rico’s Perla Roman Maldonado converted her attempt. Mexico leveled the score at 2 with a goal by Imperia Espinoza, while Puerto Rico’s Guarina Garcia Delgado hit the post. In the fifth round of the shootout, Itzel Diaz De Leon Briano had her attempt saved, opening the door for Puerto Rico. Milena Guzman Ortiz came through to clinch the Puerto Rican victory.

In regulation, Puerto Rico boasted a 7-5 lead just two minutes into the third quarter. A center shot goal by Ana Ramirez Hinojosa and an action shot by Lucia Carballo Chanfon knotted the score just a minute later. The teams tied at 8, 9 and 10, with the last Mexico goal coming with 33 seconds left to send the game to the shootout.

Puerto Rico scored on 34.5 percent of its shot attempts in regulation (10 of 29), including 1 of 4 extra-player tries and both of its penalty shots. Paola Medina Montero scored four goals, while Osmarie Quinones Colon and Garcia Delgado each found the back of the net twice.

Cuba scored the lone goal of the first quarter and led 4-1 midway through the second, before being outscored down the stretch in an 8-7 loss to Brazil.

Brazil grabbed its first lead at 5-4 on a Mirella Coutinho action shot just ahead of the halftime buzzer. The teams were tied at six with 4:19 to play in the third period, but an action shot by Mariana Duarte put Brazil back on top at 7-6 at the 2:26 mark. Coutinho put in the eventual gamewinner on an extra-player shot with 4:47 to play in the game (8-6). Aliannis Ramirez White brought Cuba within one at 8-7 with 1:19 left, but the team had its final shot blocked, sealing Brazil’s bronze medal effort.

Diana Abla, Duarte and Coutinho each scored two goals as Brazil made 8 of its 32 shots (25.0 percent). The Brazilians made just 1 of 6 extra-player tries.

Cuba hit 29.2 percent of its shots (7 of 24), including 1 of 3 extra-player tries. Daniuska Carrasco Leyva put in a hat trick, while Ramirez White scored twice.

The Americans built a 13-3 lead in the first half and never looked back in a 24-4 gold medal victory. Team USA was not done yet, however, piling up 10 goals in the third quarter to cement the win.

The United States started the match with a 6-1 run in the opening quarter, including three goals by Maggie Steffens. Makenzie Fischer and Maddie Musselman put in two goals each in the second stanza as the USA upped its lead to 13-3.

Canada scored what would be its final goal just under a minute into the third period, making it 14-4. Makenzie Fischer poured on four more goals as part of the USA’s 10-0 run in the third. Kiley Neushul capped the win with an extra-player goal with 2:55 to play.

Nine players scored for the United States, led by Makenzie Fischer‘s six goal haul. Stephanie Haralabidis and Steffens added four goals apiece, while Musselman and Jamie Neushel notched hat tricks. The Americans put in 60 percent of their shots (24 of 40), including 8 of 11 extra-player tries and both of their two penalties. Goalkeeper Ashleigh Johnson starred between the pipes, saving 17 of the 21 shots she faced (81.0 percent).

Canada made just 4 of 29 shots (13.8 percent), including 1 of 6 extra-player tries and its lone penalty. Emma Wright, Joelle Bekhazi, Shae Fournier and Kindred Paul each managed a goal.

Talking about saving the best for last