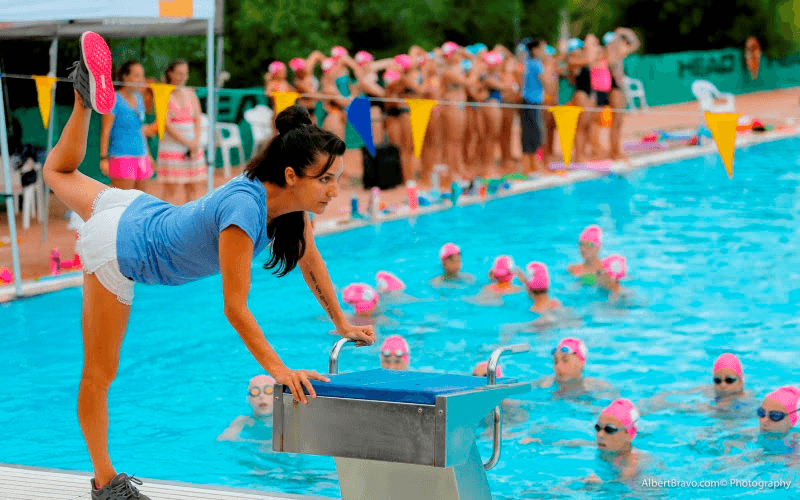 USA Synchro is pleased to announce the hiring of Andrea Fuentes as the new head coach of the U.S. Senior National Synchronized Swimming Team. Current photo via Albert Bravo

Fuentes, a four-time Olympic medalist for Spain, coached USA Synchro’s Olympic Development Camp in Spain and has assisted at other talent camps.

“USA Synchro is very excited to welcome a person with such high credentials as Andrea Fuentes as head coach of our Senior National Team,” USA Synchro President Linda Loehndorf said. “We have been fortunate to work with Andrea for the past several years at our talent camps and Olympic Development Camp, and we look forward to her continuing our upward movement in the world.”

Fuentes competed at the 2004, 2008 and 2012 Olympic Games for Spain, winning two silver medals in Beijing and silver in duet and bronze in team in London. She and swimmer Mireia Belmonte are the only Spanish female athletes to win four Olympic medals.

Fuentes, who speaks English, French and Spanish, has a degree in nutrition. She is married to fellow Olympian Victor Cano, and together they have two children.

“This is my first time as a national head coach, and my motivation is very high. I have a special enthusiasm to work for USA Synchro as this was the country that created this wonderful sport,” Fuentes said. “I feel very lucky to have this opportunity. I know it will be a big challenge, but my long-term goal is to do what I did as a swimmer, to go from 12th in the world to an Olympic medal.”

“It’s been a privilege to work with USA Synchro as head coach for the past three years, and I’m proud of the improvement we’ve had over that time,” she said. “I want to thank President Linda Loehndorf and the USA Synchro support staff, and the judges and coaches who showed me respect and cooperation. Obviously the biggest thank you goes to my wonderful athletes and their beautiful families. I wish the USA team all the best for their future and a big good luck to Andrea.

“My work has always been a large part of my life. I want to make some changes in my life, so I feel this is the right moment to step back and focus on myself. I still love synchro, and I hope to return to the sport after some time away.”

“Lolli’s coaching over the past three years has made a significant impact on the successes of our 2016 Olympic duet and, most recently, our Junior/Senior National Team,” Loehndorf said. “We wish her the best.”