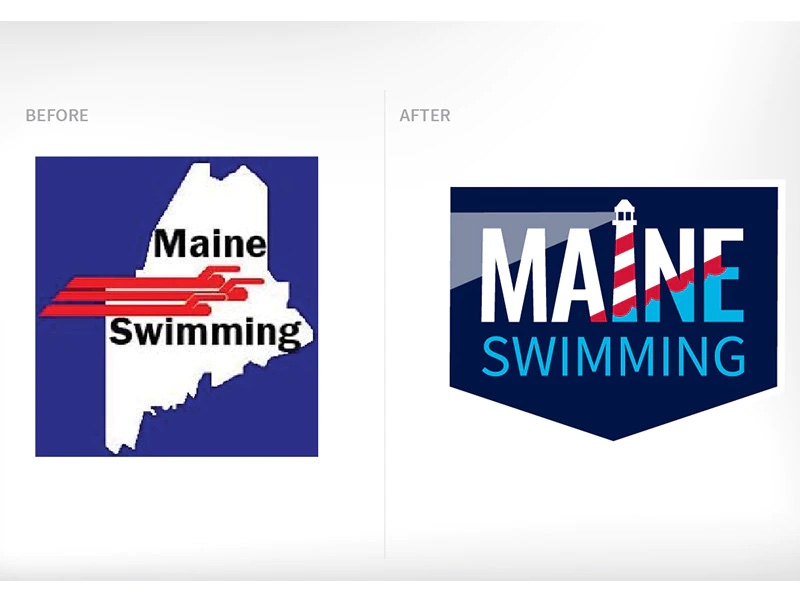 USA Swimming recently released 10 logo redesigns for its Local Swimming Committees, part of a massive undertaking to redesign all 59 logos. We ranked them. Current photo via USA Swimming

USA Swimming recently unveiled 10 logo redesigns for its Local Swimming Committees (LSCs), the beginning of a massive endeavor to redesign all 59 LSC logos.

In a news release, USA Swimming wrote that though the idea for LSC logo redesigns had long been on the minds of its creative team, the correct timing to begin such a project didn’t arrive until the onset of the COVID-19 pandemic.

“Figuring out how to tackle 59 rebranding projects was the issue,” said Matt Lupton, senior creative director, in the news release. “We attempted various panacea solutions, but ultimately decided that rebranding each LSC individually not only would maintain the visual integrity of USA Swimming, but it would also allow each LSC to emphasize its own unique aesthetic.”

Lupton and USA Swimming creative manager Natalie Elzinga officially began the project in April 2020, refining sketches and concepts to show the LSCs. Final packages include the logo in every design and size to fit LSCs’ needs, and LSCs are free to use the new logos as they please.

“USA Swimming is truly a big family of the very best and brightest,” Lupton said. “When we build one super strong brand visually, it inherently helps us all realize we’re all unified in this for the same reason – because we love this sport.

SwimSwam has ranked the ten new logos based on visual appeal, showcasing of unique geographical features, and the difference between the new and old logo.

Okay these are actually massive improvements. I dunno why people are irritated with them. It’s much better for our sport’s branding to look like an actual sports league rather than a stamp of a local bureaucrat’s office.

“Hey, look!. I found a clip art CD from 1995 in the supply cabinet. Wanna redesign the LSC logos with it?”

I am biased as a resident, but I’m a big fan of North Carolina’s new logo with the ocean waves in foreground and mountains in the background connected by lane lines so you can swim from the Mountains-to-the-Sea. Simple, yet elegant and full of state specific meaning.

this is a sussyswim article you cant change my mind

Interesting feature of the new Florida logo: it cleverly leaves the part of the panhandle that is part of the Southeastern LSC off, just sort of hanging out into white space

I think the logos are all well done. Hopefully it didn’t take them 18 months to do 10 of them and they have them all done and awaiting release

LMAO at this being an article though, and a ranking. I hope next we get to rank the LSC abbreviations. My favorites are CA (SoCal) and PV (Potomac Valley).

Lol u mean CA or PC?