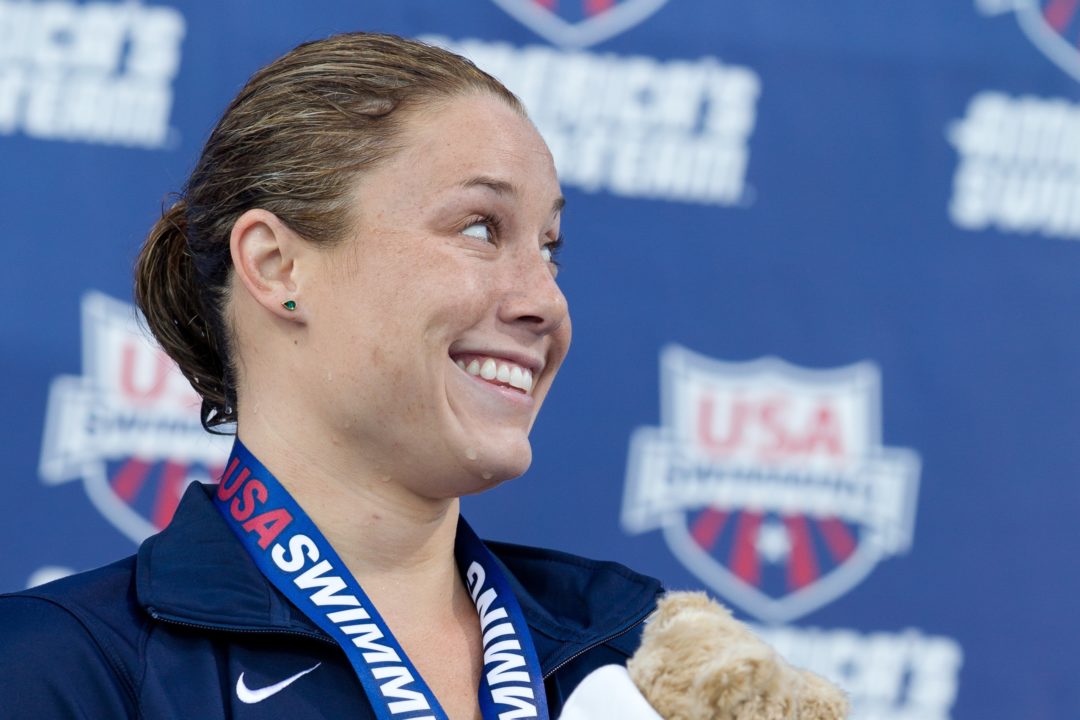 Athletes will have to give their best shot the first time around in Omaha (Photo of Katy Freeman Courtesy: ©Tim Binning/TheSwimPictures.com)

Update: USA Swimming has added limited Time Trials back into the schedule.

USA Swimming has announced that they will not be holding time trials at this year’s Olympic Trials meet. The full announcement is below.

Time Trials – Due to the incredibly large entry at the Trials (believed to be the largest senior level meet that we have ever held), Time Trials will not be held at the 2012 Olympic Trials. We apologize for letting you know this at such a late date, but the size of the meet is such that Time Trials are not in the best interest of the competition. Thank you sincerely for your understanding of this.

The move is another downfall of the huge number of entries we’re seeing at this meet, where in the neighborhood of 2000 swimmers are qualified to compete. Even with changes like flyover starts and a 10-lane pool, if a full session of time trials were held each day as well, it could result in around-the-clock swimming in the competition pool in Omaha.

Coaches can use these time trials after sessions for many different things, most of which have little to do with actually qualifying for the Olympics. That includes things like swimmers shooting for a cut to make the National Team if they didn’t make it during the regular event; to try and swim a best time (as many athletes will use their best summer taper on this meet); to qualify for a regional or Zones team; for a swimmer to get a chance to swim an event they didn’t hit the qualifying time for; to replace a DQ with a good time; or perhaps to get a time in a race that is on a double (or triple) with another of a swimmer’s events.

Though the Olympic Trials are the official selection meet for the 2012 Jr. Pan Pac Championships, time trials weren’t considered in the selection as it was (only prelims, semi-finals, and finals are counted toward that qualifying). There’s a chance that it could cost a swimmer another chance to put up a time to qualify for the 18 & under squad that will be sent to the Berlin and Moscow World Cup meets in October.

This change won’t have a huge effect on the elite of USA Swimming, but will be felt much more by the next-tier of swimmers at this meet – the younger, developmental generation of athletes. Especially frustrating will be how late the decision has been made – namely after the deadline for most of the athletes to cancel hotel reservations.

At this point, I think most people have recognized that this Olympic Trials meet has gotten too big, but given that it’s too late to fix that now, everybody is trying to ride-it-out until changes can be made for 2016.

USA swim has know this meet would be huge after the fiasco that was last summers nationals, and juniors! They could have made this call way before this point, and it will cost teams and athletes a lot of money in non refundable room fees that USA swimming gets a kick back from. Not to mention flights that will be expensive to change at this point. We have seen time trials at trials when the meet was big is 2000 and 2004. They just cut them off at a certain point. They could do the same this time around.

First, the meet was still “elite” in 2000 and 2004. Second, this isn’t the meet to bring a 16 year old to qualify for another OT cut, this is supposed to be picking the Olympic Team. Swim your race, soak up the atmosphere, watch some fast swimming and go home if money is an issue.

Here is to hoping USA Swimming gets these cuts figure out so we don’t have another meet of this size, essentially destroying the integrity of the contest. Yes, this probably could have been communicated better, but anyone who is going to be there to swim the majority of their races in a time trial format should reexamine their competition schedule.

Excellent point. I considered the meet still “elite” in the substantially fewer athletes who were there. Not even I realized they were softened in 2000. It appears that opened the flood gates for what is going on now.

So I think we know that Frank Busch intends to cut down these mega-meets. They’ve already moved that way by limiting the size of he U.S Open by only allowing long course times for entries (though even that could be an unbelievably huge event).

This was probably mentioned before, but does the 10 lane pool mean they’ll take back 20/10 for semis/finals instead of 16/8?

Nope – only for prelims.

U.S. Olympic Trials is one of the biggest competition ever. I don’t think cutting time trials is such a big deal, considering the main reason for the meet. In fact, as a fan, I love that it is so accommodating. If I were an elite swimmer, I would have a problem with the time in the season it is held – few days out of the actual Olympic Games: most swimmers can’t afford to not taper for trials, and that is a hindrance (it is hard to hold on to a taper for so long; and there isn’t enough time to regain form). On a not-so-nice note, I would also make the time cuts a little faster: yes, I know:… Read more »

I’ve always been curious about this: why does the US team hold trials so late? And, why does it almost never seem to get in the way of great performances at the Olympics? The Canadian team attempted this once, and it did not go well.

A question often voiced outside the U.S.A. Apparently holding their Olympic Trials sufficiently ahead of the Games to allow proper tapers for both events (i.e. in the Spring) would bring the Trials into conflict with pre-existing American collegiate schedules.

Since when does 26 days equal “a few days”? Trials end on July 2nd. Swimming starts at the Olympics on July 28th. The discussions about the ideal timing for Olympic Trials are seemingly unending, but past experience has guided those decisions. In 1992 they moved the Trials to March to allow for “full preparation” for the Olympics. The results were not what they had expected for a variety of reasons and they have not attempted it since.