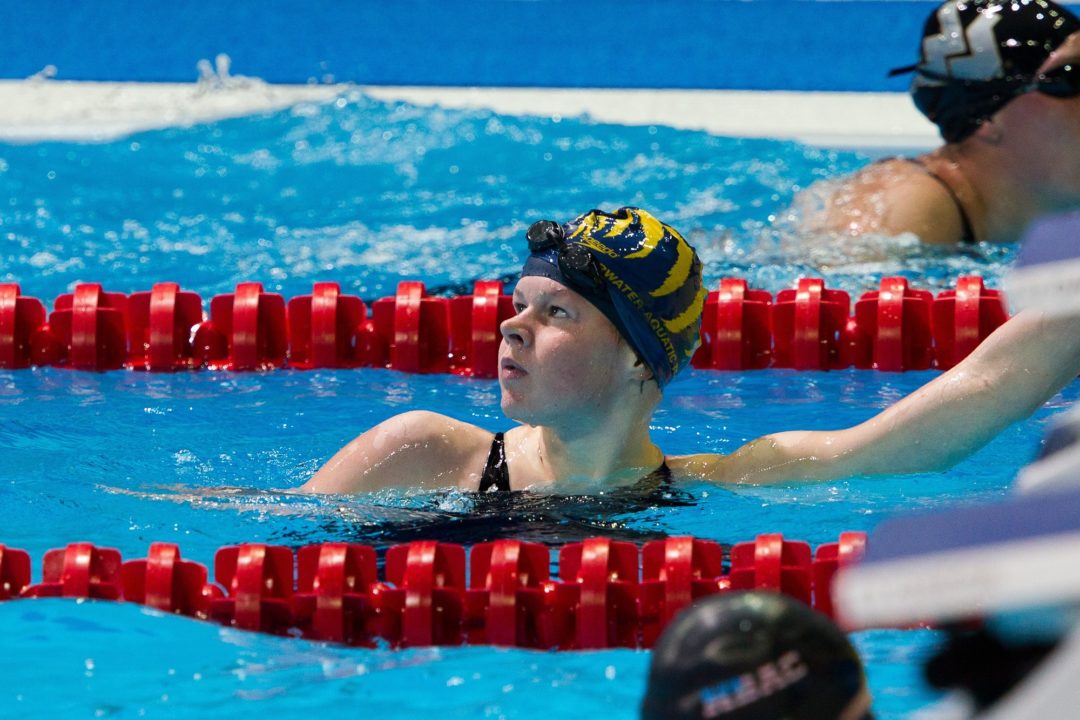 Becca Mann will lead the US to Hawaii with a tough 5-event schedule. (Photo Courtesy: ©Tim Binning/TheSwimPictures.com)

USA Swimming has announced their 2012 Jr. Pan Pac Championships roster that will head to Hawaii from August 23rd-27th. These teams were chosen from the best non-Olympian juniors at the 2012 U.S. Olympic Trials, and will face off against the best from Canada, Japan, Australia, and other Pacific-rim nations.

The meet is reserved for athletes who are between 13 and 18 as of the first day of the competition, and reserved for those who haven’t made a senior international roster in the past.

There are stars across-the-baord in this meet, but among the more exciting names is Nitro’s Matt Ellis, who will swim the 100 free and 100 fly. He is the United States’ best junior sprinter, and in 12th place in the 100 free in Omaha was the only junior swimmer who showed serious potential in the event headed into the next quadrennial. In the 100 fly, he will be joined by USC-bound Maclin Davis, who is the best yards swimmer in high school history.

For the women, Becca Mann is going to attempt an unreal, Mireia-Belmonte-esque schedule. The 14-year old National Age Group Record holder made three finals at the Olympic Trials, and now will attempt the 5 most physically-challenging events on the Olympic schedule: the 200 fly, the 400 free, the 400 IM, and the 800 free in the pool. Just  for good measure, after those four races in four days, she’ll jump into the open water, 10km swim on Monday.

Also watch out for Olivia Smoliga, who is headed into her senior year of high school. Her backstroke exploits are well-known (many think she could be the next 59.0 teenager in the 100), but her specific work on versatility in the last year has paid off with a second entry in the 50 free. Look out for her competitor in that race, Simone Manuel, who isn’t overly tall but seems to have hit a bit of a growth-spurt lately.

North Baltimore’s Chase Kalisz didn’t have quite the Olympic Trials that he wanted, but he still did more-than-enough to make this roster as a 200/400 IM’er. Jack Conger will join him as a 100/200 backstroker; those two could be the crux of the American team at the 2016 Olympics.

Some of the less-recognizable names who will make a debut at this meet include Danielle Valley, who was a big surprise finalist in the women’s 800 free, and Andrew Seliskar in the men’s 200 IM.

There are a lot of exciting names for the future in this meet; the Americans’ depth allows them to put together a secondary international roster like this, which runs parallel to the Olympics, and still wind up with a dominant lineup.

The full staff can be seen here.

and last but not least….canadian team

shout to megan kingsley from friends in south kakalaki! moving forward in small steps – zone select camp, national select camp, new member of jr pan pac team… what’s next?! impressive at very first trials – dropping about 3 secs in 200 fly and finishing 11th; and about 3 in the 400 im to finish 25th. keep it up!

Becca Mann and Allie Szekely were sure tearing it up at Trials! Amazing for age 14. I wish them lots of luck and great experience with Jr. Pan Pacs.

Japan JPP roster. Someone will need to translate though. Still waiting on Canada.

Shout out to Jackson Miller! Great student, great athlete, great kid. He’s part of the astonishing group of seniors-to-be that are re-writing the record book in California’s North Coast Section. A fun fact about Jackson is he usually doesn’t train in the late summer or fall because he’s the starting quarterback for his high school football team. This year he’s going to miss some two-a-days, some passing tournaments, and some of the general fun that goes with being the high school quarterback, but the consolation is he’s going to Hawaii!

My understanding is he will be back on the gridiron for his final season and fighting to re-gain his starting position after this meet.

Congrats to all named… Read more »

Why is Allie Szkeley listed without an event?

The Official USA-S roster doesn’t have one listed. Fortunately, once an athlete is entered in the meet, they can swim whatever they want, though USA Swimming usually requires them to swim the event that got them on the team.

Allie Szekely! I think she will swim the 100 breast, the 200 breast and perhaps the 200 IM. She’s great and I hope somebody will buy her a modern suit before the meet.

There are three SwimMACers (Brumm, headed to Michigan, Darmody, headed to Texas with neither Kip, and Baker)on this list. What a great job this club is doing