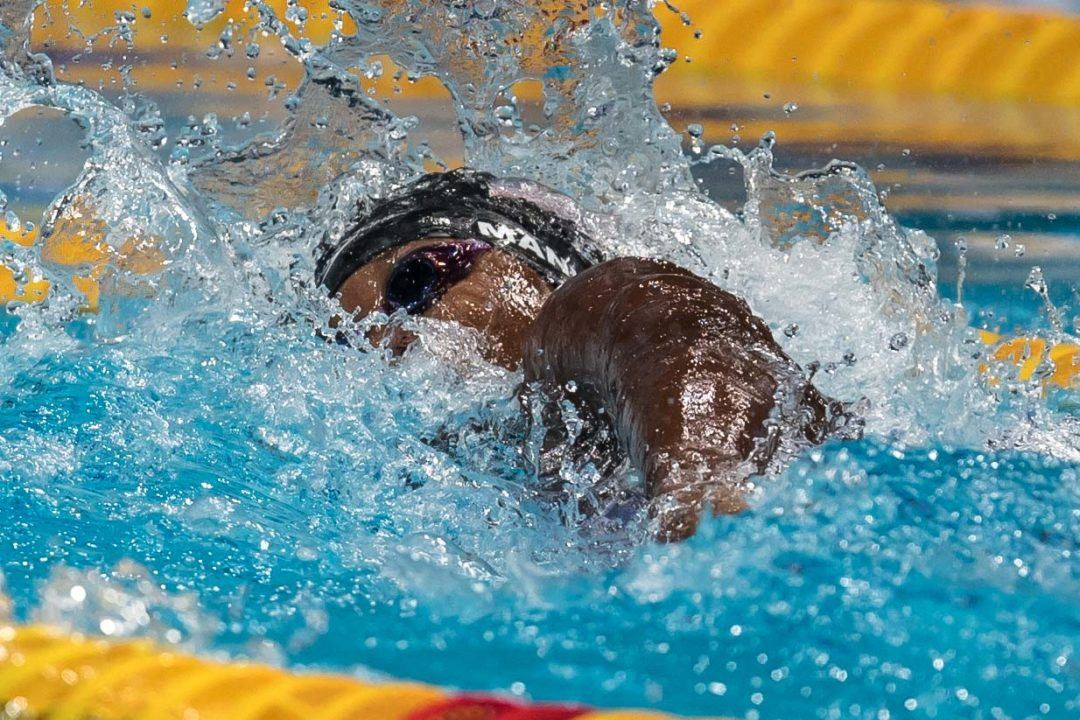 Being a relatively new event, it was pretty much a foregone conclusion that the 4×100 mixed free relay would see a new world record established tonight.  What wasn’t clear was just how much it would be lowered by.

The USA trotted out its best possible lineup and took a metaphorical sledgehammer to the previous record of 3:23.05, with Caeleb Dressel, Nathan Adrian, Mallory Comerford, and Simone Manuel knocking a combined 3.45 seconds off the mark to win in 3:19.60.

Dressel, in his third swim of the night, clocked a 47.22, demonstrating an ability to swim 47-low multiple times that’s has no precedent outside of the supersuit era.  Adrian followed up with a solid 47.49, at which point the US had almost a two second lead over the rest of the field.  Comerford maintained that lead with a very strong 52.72, before Manuel put the thing away with a 52.18.

The previous world record swim, set by the US at the 2015 World Championship in Kazan.  Comparing today’s splits to those, there was pretty steady improvement across the board.  Dressel was 1.57 seconds faster than Lochte on the leadoff leg, Adrian was just two-tenths slower than his time from two years ago, and Comerford and Manuel were nearly two seconds faster combined than Manuel and Missy Franklin were in 2015.

The USA have won five of six relays so far this week, with the sole loss being in the men’s 4×200 free, where they earned bronze.  Given the results of the 100m events, the USA should win gold in both the men’s and the women’s 4×100 medley relays tomorrow, making it seven relay golds total.

USA has a great shot at rattling the 2009 Super Suit WR tomorrow night. Flat start times for Grevers, Cordes and Dressel plus Adrian’s 47.25 anchor from night 2 put them at 3:28.07, just a couple good relays starts away from the record of 3:27.28

It will be tough because everyone has to be on point and the big challenge is Adrian matching the 46.80 anchor that Walters put down. Adrian has done that as recently as Rio but hasn’t quite at the point this meet. Should be a fun race to watch

I’d put Murphy on back. Grevers swims the 50 back final before the relay.
USA should first focus on winning the relay before the time. Imagine that GB finds a backstroker in the night. 🙂

Of course they should, but I’m not swimming so I’m free to dream.

they won’t do that unless Grevers agrees to it. too much at stake….world record, medal, and lots of money

Great race but the girls need to get with it. Their splits are abysmal when compared to the men.

Hello new person interested in swimming! Let me start off with saying that like in most sports, men have lest body fat and are physically stronger than women, so they will ALWAYS be much faster. Anything else you need to know about this great sport?

Well done. That’s easily my favorite post in the brief time I’ve been here. Hard to believe there are actually down votes, and a serious reply.

Unbelievable that people couldn’t up the sarcasm dripping off Dawgpaddle’s post. I’m British and we’re always bewildered and amused at how many Americans simply don’t catch on to irony and sarcasm.

That’s weird. I always assumed women were better at splits than men… because, well… you know, er… anatomy.

Crazy impressive American mixed free relay. Australia has not played. They have sent a B-team. USA has played with its best team. A dream team. That world record will not be easy to break.

Seriously. Why the heck did they not field McEvoy, Cartwright, McKeon, and Campbell?