Us & You: 10 Big Things from Day 1 of Short Course Worlds 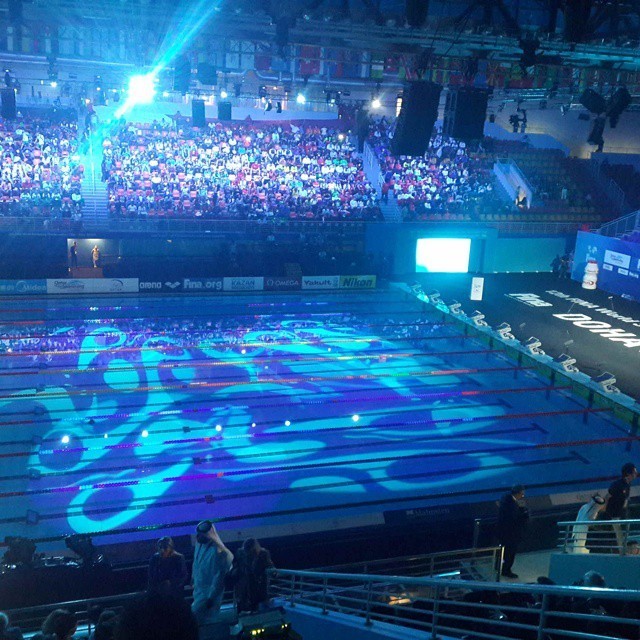 SwimSwam writers and SwimSwam readers team up to break down the big takeaways from Day 1 of the Short Course World Championships. Current photo via FINA Live Stream

Day 1 of the Short Course World Championships in Doha, Qatar saw several new barriers broken in a finals session filled with new world, meet and national records. Keeping with the spirit of newness, SwimSwam is putting a new twist on one of our classic story formats.

So here’s the unveiling: we’re tweaking our “10 Big Things” series to get you, the reader, involved. That’s right – 10 Big Things is now a cooperative effort, with 5 things we noticed and 5 things you, our readers, pointed out in the comments section.

Without further ado, let’s get to talking about a dramatic opening day in Doha. (Full recap here)

1. For whom the Belmonte tolls: No swimmer was as impressive on day 1 as Spain’s Mireia Belmonte. We’ve already written plenty about her double-world record day, but it’s worth taking one more moment to look at how she pulled off such huge performances. Belmonte was absolutely untouchable over the second halves of her races. In the 200 fly, Belmonte closed her race in 1:01.37 – compare that to the rest of the A final, whose back-half splits ranged from 1:03.73 to 1:06.39. In the 400 IM, Belmonte’s final 200 was 2:13.33 compared to a 2:18.55 from the previous world record-holder Katinka Hosszu. The take-home: don’t ever count Belmonte out a race this week, no matter where she’s at come the halfway mark.

2. Short Course Peaty starting to look like Long Course Peaty: After a breakout summer, Britain’s Adam Peaty doesn’t show any signs of slowing down. Peaty seems to be transferring his massive improvements over to short course just fine, taking the top spot in both prelims and semifinals of the 100 breast on day 1. He’s got some bloodhounds on his trail into the final, though, with world record-holder Cameron van der Burgh as well as Brazil’s speedster Felipe Franca in the field behind him, among several others.

3. 100 back could be a barnburner: Australia’s Mitch Larkin was the only guy under 50 seconds in the 100 back at semifinals, but any number of swimmers could come down with the title tomorrow. Brazil’s Guilherme Guido and Japan’s Ryosuke Irie are separated by just .04 out of semis, and Matt Grevers had the top swim in the heats with a 50.19 that’s just a few hundredths behind them. Throw in World Cup staple Christian Diener, American Eugene Godsoe, former European long course champ Radoslaw Kawecki and Frenchman Benjamin Stasiulis and you’ve got a final where basically everyone has a shot at a medal. In a field this tight, great swimmers are bound to miss the final – the casualties today were Short Course World Championships record-holder Stanislav Donetc and British standout Chris Walker-Hebborn.

4. Super-suited World Records under assault: Ever since the full-body, ultra-buoyant, rubberized tech suits of the late-2000s were banned, several world records have stood virtually unchallenged. But as the sport continues to get faster year by year, athletes have started to reel those records back in. The obvious example of this is Belmonte’s 200 fly, which hacked a full second off a “shiny suit” mark from 2009, but also keep an eye on Lithuanian breaststroker Ruta Meilutyte, who is just .01 off a 2009 record in the 50 breaststroke heading into tomorrow’s final.

5. France owning the 400 free relay: The 400 free relay might be one of swimming’s most coveted crowns, and it’s provided some of the most exciting races in swimming history, including the men’s finishes of the past two Olympic games. The latest country to put a stranglehold on the men’s title is France, which won yet another gold today. The French won the event at the London Olympics in a memorable relay run-down by Yannick Agnel, then defended their title at the 2013 World Championships. Now the French won again, this time without Agnel even being on the pool deck, thanks to Florent Manaudou’s crushing 44.80 split on the second leg.

1:52.7 split from Sharon van Rouwendaal of the Netherlands. Second only to Femke Heemskerk. Looks like she’s got some speed to go with all that endurance! I’ve said it before, and I still believe she is going to be Ledecky’s biggest competition in the years to come.

Our take: Van Rouwendaal certainly isn’t at Ledecky’s level yet, but the Dutch record-holder in the 400, 800 and 1500 frees is only 21 and already shows incredible range – definitely Ledecky-like. She’s also a national record-holder in the 200 back, 200 fly and 400 IM.

Le Clos is well on his way for a possible undefeated sc season.

Our take: it’s hard to verify exact stats for sure without pulling up every swim le Clos put up this season. But a cursory lookback found just one loss – in the 200 free at South African Nationals to teammate Myles Brown. Le Clos avenged that loss today by taking a world title in the event, and also went 3-1 at Nationals along with a 27-0 record in individual races on the World Cup tour. All-in-all, a pretty good season so far.

8. Ruta’s reactions: In our meet recap, M Palota noted one of the major strengths of young Lithuanian Ruta Meilutyte:

Ruta gets off the blocks like a cannon! A .61 reaction time for her 50 breaststroke. There isn’t a woman in world that can touch her and, I daresay, I don’t know if any of the men can either.

Our take: .61 is closer to a backstroke reaction time than it is to a typical dive start. Just another reason why Meilutyte has been so dominant in the shorter races over her career.

She [Belmonte] is now a World Record holder in freestyle, IM, and butterfly (all SC). I am very impressed.

Our take: And we used to think Katinka Hosszu was the only one who could rule a meet over that many disciplines!

10. Le Clos’ free prowess: Another praise of versatility here. Commenter BKP notes how much Chad le Clos has improved in his freestyle events of late:

… Amazing how much LeClos has improved on his free events over the last couple of years. Kudos to him!

Our take: Once known only as a butterflyer internationally, le Clos has really become a world force across the event spectrum. With Michael Phelps and Ryan Lochte aging, le Clos and Kosuke Hagino seem to be the next generation of do-everything stars in international swimming.

Want your take in our next “Us & You” 10 Things story? Hit the comments section on our live recaps with your meet analyses and you just might see your name in lights (or at least in bold print on a SwimSwam story)!

What is the fastest reaction time ever that we know of?

even in 50m breaststroke semifinals was 0.58 reaction time :))

I know the German swimmer Dorothea Brandt is very fast off the blocks. Alia Atkinson is usually, too. Of course Cesar had a blistering start. Ben Proud & Ruta Meilutyte have starts drilled into them by Jon Rudd. I think Rudd improved Prouds RT by .1 when Ben moved to Plymouth. Siobhan O’Connor, too… the best start (RT and underwater) in international swimming.. watch for that tomorrow.

I think 0.57 is about topping out for humans, to go any faster I think It’d be somebody anticipating the beep.

Vlad is usually very fast off the blocks.

Ruta was .60 this morning in the IM heats!

At Commonwealths Peaty had the following RTs…

His slowest RT throughout Commies and Euros was 0.62 (14 races!)

Possibly a contender for fastest RT?

Start it is a small piece of swimming, but have a lot of things to work
RT?Schoeman has a lot of RT´s around 0.5.Morozov too.
If you consider till 15 meters line, Cielo was the best in the past with times around 4.9/5.0s at 15 meters mark(i believe he made his best start ever at Paris Open or PanPacs, dont remember well).After knee surgery, he goes around 5.3s now(it was 5.28 in his textile best, if i am not mistake, it was 5.11 in worlds 2011- a lot of diference after surgery).His RT unchanged, alwasy around 0.6.
Right now, Schoeman,Morozov and Manaudou are the best till 15 meters swimming around 5.1s.

Interesting you mention Schoeman as Proud consistently beat him to 15m during the Commonwealth Games, perhaps Roland has lost a tenth finally 😉