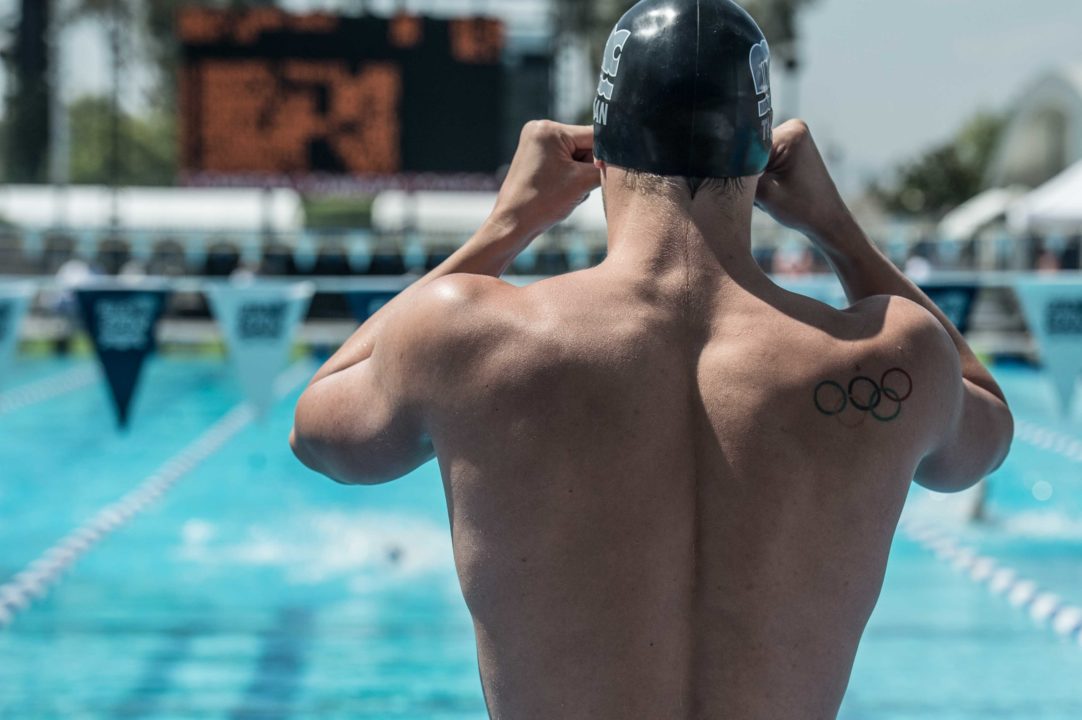 Bolles' Ryan Murphy just missed his best time with a 53,62 for 2nd, and SwimMAC's Nick Thoman (FEATURED IMAGE) was 3rd in 53.65. That should give him a spot on the National Team for the year. (Photo Credit: Mike Lewis, Olavistaphotography.com)

The Minnesota women have graduated a few stars over the last two-to-three seasons, but they may have discovered a new one on Friday night at the 2013 U.S. Open.

Junior-to-be Kiera Janzen won the women’s 200 free in 1:58.28: that’s more than three seconds better than she had been coming into the meet. She was in a good battle most of this race with the likes of Sarah Henry and Kelly Stubbins from Australia, but Janzen put in a great final 50 to pull away.

Henry wound up 2nd in 1:58.89, followed by the Australian sprinter Stubbins, who was out like a bolt but faded at the end. She would still say after the race that she was surprised by her result and how good it was, as she doesn’t usually go after these 200’s.

North Carolina’s Danielle Siverling just missed breaking the two-minute barrier, but was a lifetime best of 2:00.05 for 6th.

In the men’s 200 free, it was once again the Sebastien Rousseau show. This isn’t his best event, but he still took a win in a huge 1:48.51, followed closely by his fellow South African Darian Townsend in 1:48.80. Neither of them swam at South Africa’s trials, but with Chad le Clos they would have been a great start to a potential finals-worthy 800 free relay.

Stanford’s Tom Kremer posted another top three finish, though he just missed his best time from prelims, with a 1:48.93.

Wisconsin’s Nicholas Caldwell showed that his career is far from derailed after a tough run at Florida, going for 4th place in 1:49.05, and Michigan/Danish swimmer Anders Nielsen took 5th in1 :49.31.

The Australians didn’t get a single 100 meter breaststroker into the final at the World Championship, which means that they really could have used the services of Leiston PIckett or Lorna Tonks for their medley relay. They didn’t get the job done at Trials, though, and so they had to use their best swims at this meet. Pickett took the win in 1:07.19, the best time done by an Australian this week, and Tonks was 2nd in 1:07.56, the second-best time done by an Australian this week.

The top-finishing American was Notre Dame’s Emma Reney in 1:08.08. This has been a very good meet for her this year, and may have been the confidence-builder to turn her into someone with obviously national and international-level potential, into a true national-level contender.

British swimmer Rob Holderness, who was robbed of a World Championships swim in the 200 breaststroke by a DQ-reversal, was 4th in 1:01.28, and Cal sophomore Josh Prenot was 5th in 1:01.44.

Texas’ Sarah Denninghoff didn’t break a minute in this race like she did at the World Championship Trials in June, but she did win her first Nationla Championship with a 1:00.04 in the women’s 100 backstroke final. That beat out promising Australian teenager Hayley Baker, who was 2nd in 1:00.86.

A future Texas teammate of Denninghoff’s won the B-Final as well: Tasija Karosas from Saint Andrew’s in Florida was a 1:02.19.

Russia’s Arkady Vyatchanin had the swim of the night with a 53.06 in the men’s 100 backstroke final. Note that this time would have placed 2nd at the World Championships this week, he simply didn’t have a country to represent at that meet.

Bolles’ Ryan Murphy just missed his best time with a 53,62 for 2nd, and SwimMAC’s Nick Thoman, who skipped Indy, was 3rd in 53.65. That should give him a spot on the National Team for the year.

What do you mean that Vyatchainin didn’t have a country to represent at that meet? Is he in transition re: citizenship?

vyatchanin had a fall out with russian swimming federation, so he is looking for another country to represent.

South Africa needs a backstroker for its medley relay. 🙂

Trinidad could do with a top level backstroker 🙂

Tom Kremer is just about as American as you can get raised in Northern California but swims for Israel. Can’t call him a foreigner in my book. Better to call him a mercenary, like Mike Cavic was.

Destroy the Trojans I say!