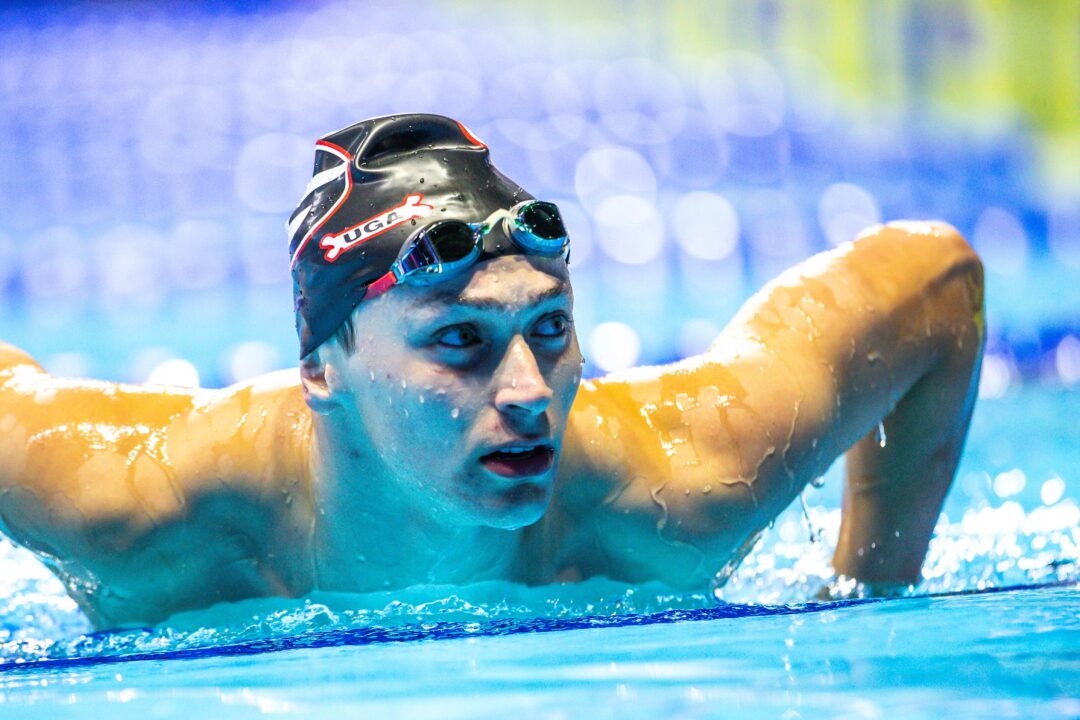 Men’s Swimmer of the Week: Luca Urlando, Georgia
Georgia’s Luca Urlando, a sophomore from Sacramento, Calif., posted three winning B-cut times against North Carolina and South Carolina. Against the Gamecocks, Urlando dropped the nation’s fastest 100 backstroke time this season at 46.32. Against the Tar Heels, he swept the butterfly events with times of 46.43 and 1:43.37, respectively. The 200 fly time currently ranks fifth nationally and 100 fly times ranks sixth. In both meets, Urlando also helped lead victorious teams in the 200 medley relay, swimming the butterfly split against UNC and the leadoff backstroke split against USC. Urlando’s 50 backstroke split of 21.85 against the Gamecocks is the 10th fastest time in the nation this season.

Women’s Co-Swimmers of the Week: Abby McCulloh, Georgia and Mona McSharry, Tennessee
Georgia’s Abby McCulloh, a freshman from Lilburn, Ga., earned four podium finishes against North Carolina and South Carolina. Against the Tar Heels, McCulloh finished first in the 1,000 freestyle with a time of 9:44.84, the second-fastest time in the nation this season. She followed that up with a winning time of 4:47.25 in the 500 freestyle, the ninth-fastest mark in the nation. Against the Gamecocks, McCulloh earned her third win of the weekend as she again took the 1,000 freestyle, followed by a second-place finish in the 500 freestyle.

Tennessee’s Mona McSharry, a sophomore from Dublin, Ireland, was the top points scorer (20) in Tennessee’s win against 13th-ranked Louisville. McSharry swept both breaststroke events against the Cardinals, posting season-best times in the 100 (59.77) and the 200 (2:10.19). Her time in the 200 breaststroke ranks fourth nationally. McSharry was also a member of the 200 medley squad that ranks 10th overall after recording a time of 1:38.78 against Louisville.

Missouri’s Sarah Rousseau, a senior from Melbourne, Fla., swept the springboard events in the win over Arkansas. Rousseau posted a final score of 282.90 in the 1-meter and 330.38 in the 3-meter. She was also runner-up on platform with a score of 234.60.

Women’s Freshman of the Week: Duné Coetzee, Georgia
Georgia’s Duné Coetzee, a freshman from Pretoria, South Africa, opened her Georgia career with strong performances against North Carolina and South Carolina. Against the Tar Heels, Coetzee took first in the 200 freestyle (1:47.52), followed by a third-place time of 55.07 in the 100 butterfly. On Saturday against South Carolina, she posted the ninth-fastest 500 freestyle time in the nation this season (4:47.21) to win the event and placed second in the 200 butterfly (2:00.46).

I keep pulling for Luca. In 2019, at 17, he was our best 200 fly guy, the only one with genuine Olympic Podium potential. 1:53.84 was awesome at that age. Then came the shoulder injury. That had to be really tough. One moment, you’ve got Michael Phelps calling you and Kristof Malik, looking over his shoulder, keeping an eye on your progress. The next moment, your finishing 4th in both the 100 and 200 fly at the Tokyo Olympic trials.He seems like a great young guy, with a good head on his shoulders. I wish him the best.