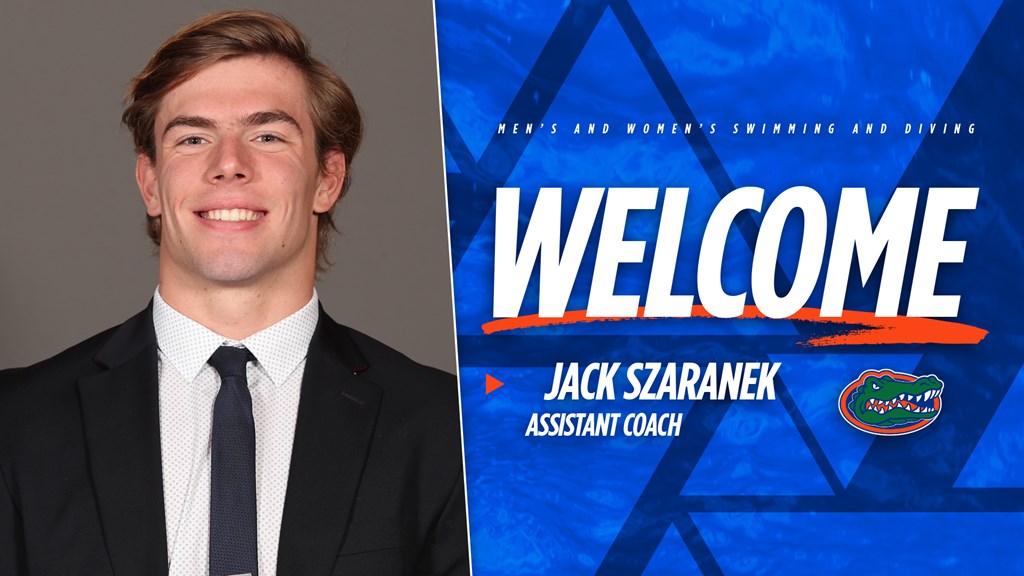 After spending last season as a volunteer assistant with the University of Florida, Jack Szaranek will join the staff full time next season. Current photo via Florida Athletics

The University of Florida has announced the hiring of Jack Szaranek to fill out its newly-recombined coaching staff.

Szaranek is a Gator alumnus from Glenrothes, Scotland. He swam at the University of Florida from 2015 through 2020, following in the footsteps of his older brother Mark – who was a 21-time All-American for the Gators.

Szaranek served as a volunteer assistant during the 2020-2021 season.

“We are extremely excited to have Jack join our coaching staff,” said Nesty. “Jack is a former Gator swimmer and will make a positive impact on our program out of the gate. Our current athletes and staff respect him tremendously. We will certainly benefit from his passion and commitment. We are very fortunate to have him with us.”

“I am extremely excited to be given this opportunity to coach at my alma mater,” said Szaranek. “I am absolutely delighted to be working alongside such experienced and successful staff. Having swam here during my college career, and now getting the chance to coach the Gators is a huge honor.”

As a teen in Scotland, Jack Szaranek was a member of the Scottish Youth Development Squad.

Szaranek joins fellow assistant and new hire Kristen Murslack, associate head coach Steve Jungbluth, and associate head coach Whitney Hite as members of the staff under head coach Anthony Nesty. Nesty was named the head coach of the men’s and women’s programs this offseason, adding the women’s staff to his duties after Jeff Poppel left to take over the combined program at South Carolina.

Congrats to this young guy on getting this position. I wish he would have spent more time as a volunteer before being moved into this position while they hire someone with a lot more experience.

As I said with Margo. I wish this guy nothing but the best of luck.

This guy is a beast, yet people will still hate in the comments. I wish IU could have hired Jack!

Please don’t misunderstand my comment as hating this kid. I’m sure his former teammates (now his athletes) like him. My point comes from knowing full and well that one year on the pool deck does not make you an experienced coach. When you have next to no experience, you have the potential to make huge mistakes from a false sense of security in your ability to make smart coaching decisions. New coaches don’t know what they don’t know and these college athletes (who trained their whole life to make this team) need to be able to rely on someone who has the years of coaching experience to help them through this very important part of their lives.

This man will have an incredible coaching staff around him guiding him through these next couple of seasons. I imagine Nesty will have a very close watch over his training program ensuring that the athletes are getting what they need

Ok. Let’s say that Nesty has close control over the training program.

What happens when an athlete confides in him that they are losing confidence around NCAA? Does he potentially say hold up let me get some help because he doesn’t know how to navigate through this VERY TOUGH AND VERY REAL conversation or does he wing it?

What if an athlete asks him for feedback on their stroke but the staff hasn’t talked about that specific athletes technique plan with him? Does he give direction that may or may not enforce what other coaches want them to be focusing on? Does he even understand how to look for technique flaws?

My points extend well beyond Jack. Im sure… Read more »

Let’s call it what it is, he’s going to be a time keeper for years. None of these jobs have hired someone with the most experience. It’s nepotism at its finest.

Is this a joke?