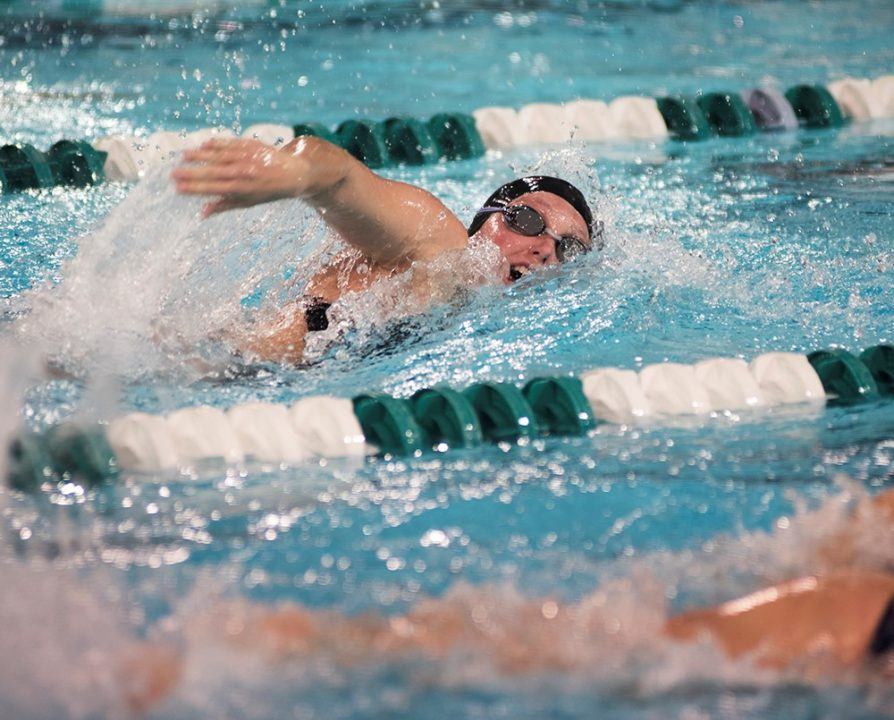 FAIRFAX, Virginia – Buoyed by a pair of top-two finishes by sophomore Meagan Johnson and top-three finishes from sophomore Kyra Schemmel and freshman Rebecca Groves, UNCW held off a late charge from Colonial Athletic Association rival Drexel to its second consecutive Patriot Invitational championship on Saturday at the McKay Natatorium.

“Our women performed extremely well this week with an enormous amount of lifetime best swims,” said UNCW Head Coach Jason Memont. “It was great for them to defend their team title with such a well-rounded performance. Meagan Johnson led our very talented sophomore class with three first-places and a second-place, while lowering her own school record in the 200 fly. I couldn’t be happier with the hard work we’ve put in this first semester and I can’t wait to get back to practice so we can continue to get faster and faster.

Will Ryan captured this third event of the meet in the 200 Backstroke as UNCW’s men’s team took fourth behind winner UMBC.

“Will Ryan is a leader in the pool and showed his versatility with three individual wins this weekend. He carried us through a week of racing where some of the team showed signs of being extremely tired from the hard work they’ve put in. There were a lot of best times set, but the men are looking forward to getting into second semester where they can begin to get more rest and sharpen up in the pool. We’ve worked extremely hard this year and that will lead to great results in our upcoming competitions. Sean Cannon and Noah Cahan had great fall semesters showing the promise of a great freshman class.”

Freshman Jason Arthur broke another school record in the 200-yard backstroke with a time of 1:47.78.

Sophomore Joseph Brown placed second in the 200-yard breaststroke as he touched the wall at 2:03.45.

Select Drexel swimmers will now compete at the AT&T Winter National Championships in Atlanta, Ga. from Thursday, Dec. 1 through Saturday, Dec. 3 to close out the 2016 portion of the schedule. The 2017 half of the schedule begins on Saturday, Jan. 7 when the Dragons host CAA foes Delaware at the Daskalakis Athletic Center for the first home meet of the season.