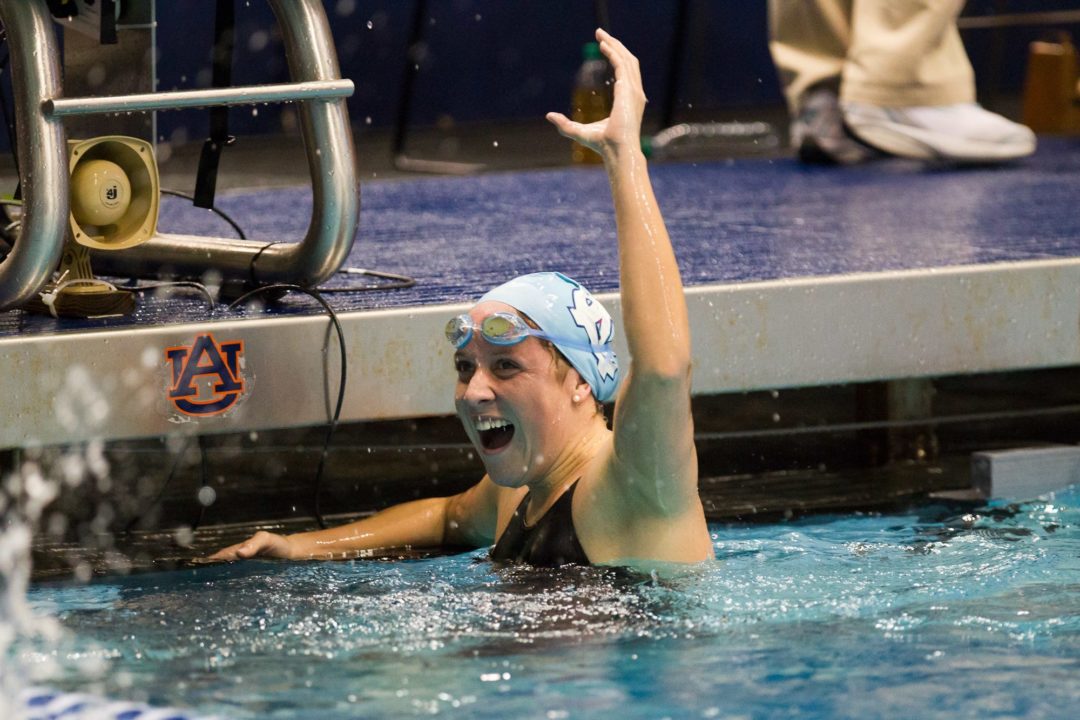 With a sweep at Duke today, Stephanie Peacock and the North Carolina Tar Heels went 4-0 for the weekend. Archive photo via Tim Binning/TheSwimPictures.com

Coming off wins last night again in-state rival NC State, the North Carolina Tar Heels traveled to Durham and swept the Duke Blue Devils.  Behind a distance sweep from freshman Caty Hulsey, the #12 Tar Heel women went 1-2-3 in three of the first five individual events en route to a 157-134 victory, while the men got a pair of individual victories from Dominick Glavich, Eugene Tee, and Patrick Myers to win 172-120.

North Carolina opened the women’s meet with wins in the first three events, beginning with the 400 medley, where bookend swimmers Carly Smith and Allyn Hardesty were the difference makers for the Tar Heels.  Smith led off with a 55.79 backstroke split to give UNC a 2.5 second lead, only for Duke breaststroke standout Christine Wixted to close the gap over the next 100 yards.  After Cari Blalock provided a little cushion on the fly leg (55.82), Hardesty put the event away with a 49.96 on the end for the win, 3:46.12 to 3:47.12.

North Carolina went 1-2-3 in the next two events, with Hulsey, fellow freshman Lilianna Casso, and Meredith Hoover taking control in the 1000 freestyle for North Carolina, touching in 10:12.74, 10:17.21, and 10:27.28, respectively.  With the opportunity to train with  Hulsey and Casso have made big contributions in their first years for UNC, bolstering a distance group that needed to add some depth before the graduation of senior U.S. National Team member Stephanie Peacock this spring.

Danielle Silverling, Peacock, and Blalock followed that up with a 1-2-3 of their own in the 200 free, with Silverling nearly even-splitting the race for the win (1:48.90).  Between Silverlng, Hardesty, and the return of Peacock, the Tar Heels have a great opportunity to earn All-American honors in the 800 free relay at NCAA.

After Carly Smith took the 100 back for the Tar Heels, the Blue Devils got their first victory of the meet behind Christine Wixted in the 100 breast.  The 2013 ACC Championship runner-up opened up a huge lead over the first 50 yards, and held off teammate Emily Barber for the win in 1:03.18.

The 200 free relay was a back-and-forth battle that ended the meet with some intensity. Duke took an early lead thanks to Lauren Weaver‘s 23.07 and Maddie Rusch‘s 22.86 on the first two legs. But UNC battled back, retaking the lead on Hannah Lincoln‘s 23.1 split and Danielle Silverling closed things out for a 1:33.71 Tar Heel win. Duke was 1:33.94 for second.

The men’s meet started off with a close battle in the 400 medley relay. The top two UNC relays and Duke’s A squad all came in within a half-second of each other, but both UNC relays managed to top Duke. The top Tar Heel team was Brad Dillon, David Speese, Ben Colley and Chris Gondek in 3:21.54. Gondek’s freestyle split was the difference-maker. Although Duke breaststroker Hunter Knight put up the fastest breast split of the field, his Blue Devils were unable to top UNC’s second squad, which went 3:21.65 to Duke’s 3:22.10.

While this was the last dual meet for the Blue Devils before the ACC’s, the Tar Heels will close out their dual meet season against the College of Charleston next Saturday at home.

Just for the record. Duke has never beat UNC.

Pipov – That’s incorrect. Duke has won twice in now 79 meetings with UNC on the men’s side. You are correct that the Duke women have never won, though (40-0).