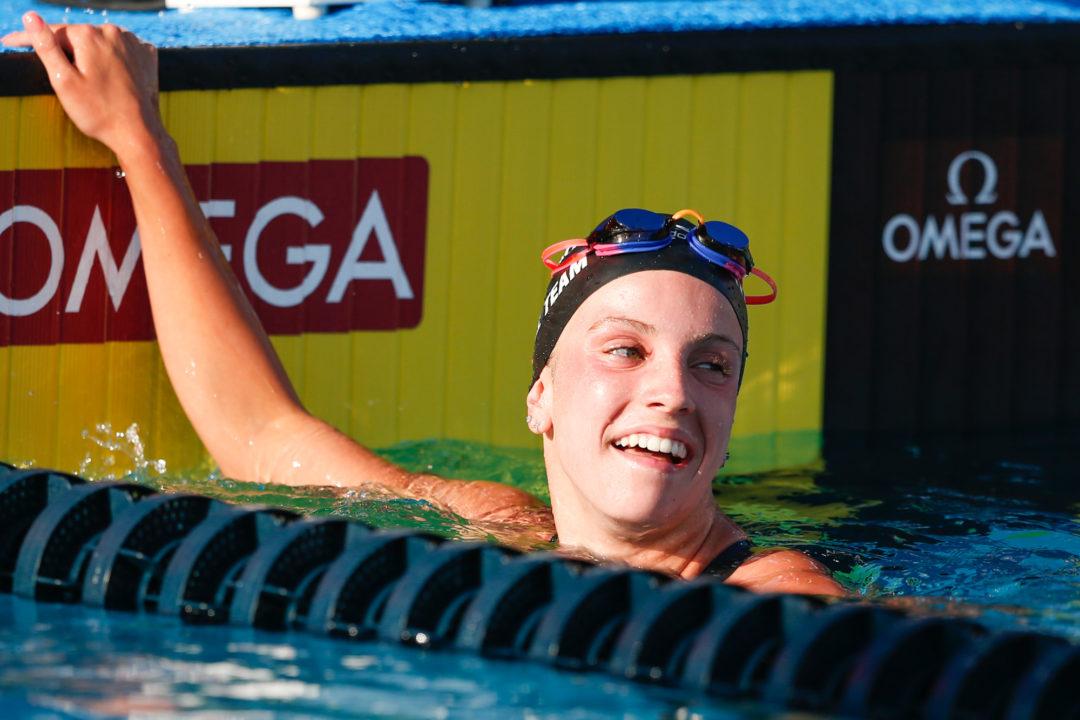 Riptide 17-year-old Regan Smith had an impressive month of June, even beyond her world junior record 100 back. Smith hit three freestyle lifetime-bests, too. Archive photo via Tim Binning/TheSwimPictures.com

Claire Curzan was already the best butterflyer and freestyler in 15-16 age group history. But in December, she also became one of the best backstrokers.

Riptide 17-year-old Regan Smith had an impressive month of June, even beyond her world junior record 100 back.

Smith won’t get to swim that event at Worlds – she’s only qualified in the 200 back – so the Counsilman meet appeared to be her main tune-up meet, but also a chance to swim a wider range of events. And that improving versatility has Smith knocking on the door of multi-stroke Olympic berths next year.

That 200 is maybe most interesting. Smith had never been under 2:01.9 as of early 2019, but already has cut her best down to 1:58 over the first half of the year. Though the competition is fierce and the national depth great, Smith could be a factor for a 4×200 free relay spot by next summer: her time would have ranked 11th among Americans last season and sits 9th among Americans this year.

Smith is proving to be an outstanding flyer and freestyler along with her well-reported backstroke prowess. Maybe it’s too early to start forecasting multi-event Olympic berths for Smith, who is still just a teenager looking for her first Olympic appearance. But she’s going to be in the mix next summer in at least the 100 and 200 back, with a good shot in the 200 fly (3rd among Americans last year) and perhaps some relay possibilities in the women’s medley, mixed medley and even 4×200 free relays.

Regan Smith, you are amazing! I look forward to watching your future swim career.

She is swimming lights out right now ….can’t imagine what she will bring on this summer & next one . We are in for a real threat with her , thats guaranteed !! What a talent 😀👌

(looking back at this) Whoa, both of these came true!

How’s her breaststroke? Any chance of her swimming IM?

She swam the 2IM at 2017 nats and went 2:15 with a 42.8 breaststroke and she hasn’t really done much IM since so I think the breaststroke hurdle might be too big for her