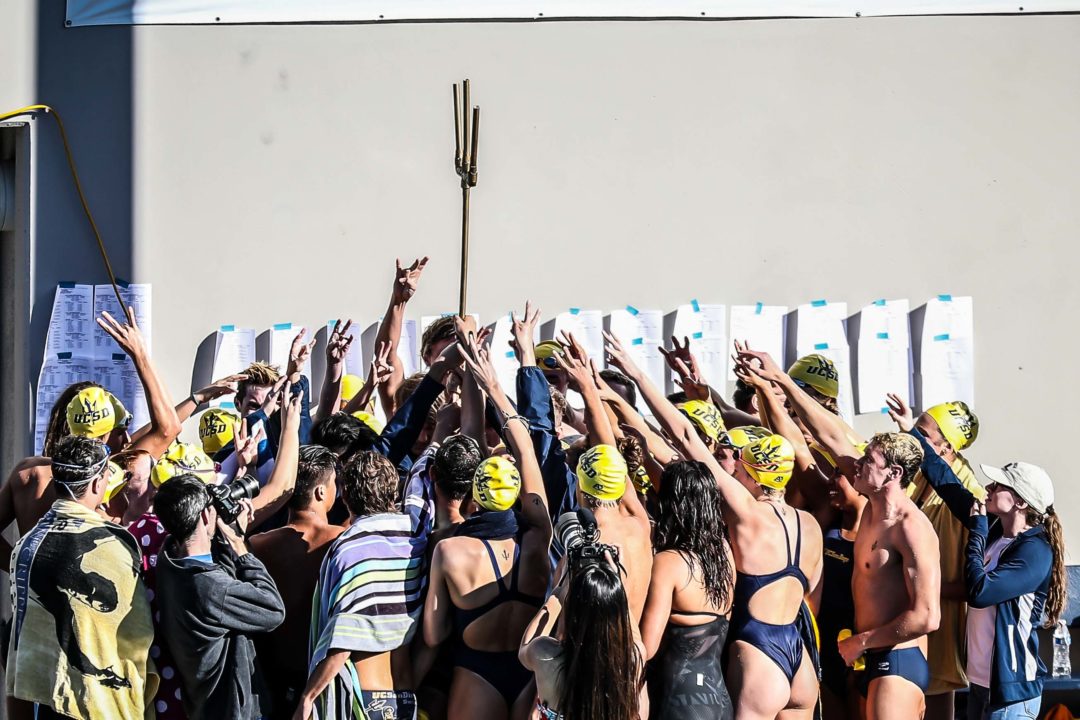 Editor’s note: the College Swimming Coaches Association of America (CSCAA)’s rankings track dual meet strength, specifically. That is, a higher-ranked team is expected to win in a head-to-head dual meet with a lower-ranked team, according to the voters. These rankings aren’t an NCAA finish prediction – for a ranking closer to that model, check out SwimSwam’s Power Rankings (for Division I).

The College Swimming Coaches Association of America (CSCAA)’s newly-released Top 25 Dual Meet Poll for Division II has the University of California, San Diego at the top of both the women’s and men’s rankings. This is the last poll before the teams head off to their conference championships later this month; the final poll is scheduled for release on February 27.

UC San Diego and Queens University of Charlotte held on to the top two positions in the women’s poll. They had been 1-2, respectively, at the time of the last poll on January 16, as well. There was a slight reshuffling among the rest of the top 5. Drury swapped places with UIndy at 3/4 and Wingate held strong at #5. The rest of the top 10 showed very little movement.

The men’s poll featured a 4-place jump by UC San Diego and 3- and 4-point improvements by McKendree and Nova S’eastern. UCSD took over the top spot after having been ranked 5th in the last poll, while McKendree vaulted into the top 5 from 8th in January and NSU moved to #6 from 10th. Drury and Queens repeated as #2 and #3, while UIndy moved from 1st to 4th.

A complete list of the Top 25 rankings can be found at: cscaa.org/top25

They need to redo the men’s poll. West Florida ranked with no men’s team. Sioux Falls, Dixie State and Cal State East Bay all receiving votes without a men’s team.