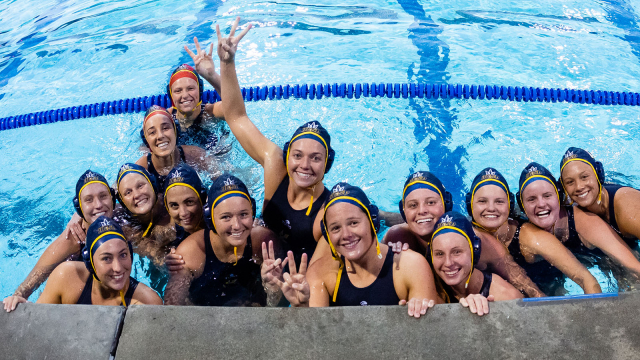 The 10-team, nine-match NCAA Water Polo Championships began on Tuesday with a pair of play-in matches, with #14 UC San Diego and #8 Pacific coming out with victories in the opening round to advance to the quarterfinals. Current photo via UC San Diego Athletics

The 10-team, nine-match NCAA Water Polo Championships began on Tuesday with a pair of play-in matches, with #14 UC San Diego and #8 Pacific coming out with victories in the opening round to advance to the quarterfinals. The victors will now face the top two seeds in #1 USC and #2 Stanford on Friday.

Shelby Stender netted four goals and six other players chipped in scores as #14 UC San Diego bested #19 Wagner 12-8 in the opening round on Tuesday.

The victory, UCSD’s sixth in a row, sends the Tritons to the NCAA first round for the first time since 2016, when the team bested Whittier 11-7 in a play-in game.

Wagner got a hat trick from Daisy Nankervis and two goals from Savannah Henshaw. Sophia Diaz Alvarez, Kristy Donkin and Jacqui Sjogren also added a goal apiece for the Seahawks.

Franke put the Tritons on the board with 6:50 left in the opening period. Donkin countered for the Seahawks one minute later, but UCSD poured on three more scores in the stanza to go up 4-1. Stender netted two goals (at 3:19 and 2:33) while Pevehouse chipped in a third with just 21 ticks to go.

Wagner outscored UC San Diego 3-2 in the second period, including two goals by Nankervis (6:23 and 4:30). The Tritons countered each time as Onstott (5:06) and Ransone (2:56) found the back of the net. The Seahawks cut the deficit to two (6-4) just before halftime as top scorer Diaz Alvarez managed her lone goal of the day.

Stender scored just 20 seconds in the third period, but Sjogren answered one minute later. Pevehouse increased the UCSD lead to three (8-5) on a penalty shot with 18 second to go in the stanza.

The scoring was far from over as the teams combined for seven goals in the fourth period. Boland and Henshaw traded scores to start the period at 6:36 and 5:47 respectively. Schilling made it 10-6, but Henshaw again found a respond for Wagner. Boland and Stender gave UC San Diego a little cushion at 12-7 scoring at 4:20 and 1:52. Nankervis finished her hat trick just over 10 seconds later, but it was not enough.

UC San Diego scored on 12 of its 13 shots, while Wagner made good on eight of its nine attempts.

The win earns UCSD a Friday meeting with #1 overall seed USC. The Trojans topped the Tritons 13-4 back on Jan. 20.

The loss ends Wagner’s season at 30-10 and ends the careers of seniors Erica Hardy, Sarah Limanni, Abby Irving and Natalie Kayton, who graduate with 110 career wins, making the group the winning class in program history.

Cal Lutheran could not find an answer for the offensive onslaught provided by #8 Pacific, falling 16-4 in the NCAA Opening Round on Tuesday. The Tigers meanwhile earned their third straight NCAA quarterfinals appearance with the victory.

Pacific scored four goals in the first period, three in the second, five in the third and four in the fourth, while allowing just one goal in each stanza.

GCC Player of the Year Kyra Christmas led the way for the Tigers, scoring five goals on five shot attempts. Toula Falvey added a hat trick, while Mariana Duarte and Savannah Fitzgerald each chimed in with two scores. Brianna Utas, Viktoria Tamas, Lucy Davis and Truly Dorland also got in on the action with a goal apiece.

SCIAC Newcomer of the Year Lexi Rond continued to lead Cal Lutheran in the postseason as the Regals’ top scorer (59) accounted for two of the team’s four goals. Nicole Roed and Mardell Ramirez also scored for the Regals.

Pacific scored the first three goals of the contest and led 4-1 at the end of the first period after two scores by Christmas (4:53 and 2:19) and one each by Dorland and Duarte. Ramirez put CLU on the board with 4:15 to go in the first to make it 3-1.

Rond scored first for Cal Lutheran in the second period, but it was an offensive barrage from there as the Tigers poured on eight straight goals over the next 13 minutes. Christmas notched two goals to begin the onslaught (5:31 and 2:19). Fitzgerald added the final goal of the first half with 1:32 to play, making it 7-2 Pacific.

The teams traded goals to start the final stanza as Fitzgerald (6:48) and Rond (6:32) found the back of the next.

It was all Tigers after that as the victors closed out the contest with three more goals. Falvey (6:19 and 0:37) and Davis (4:54) put the final nails in the victory.