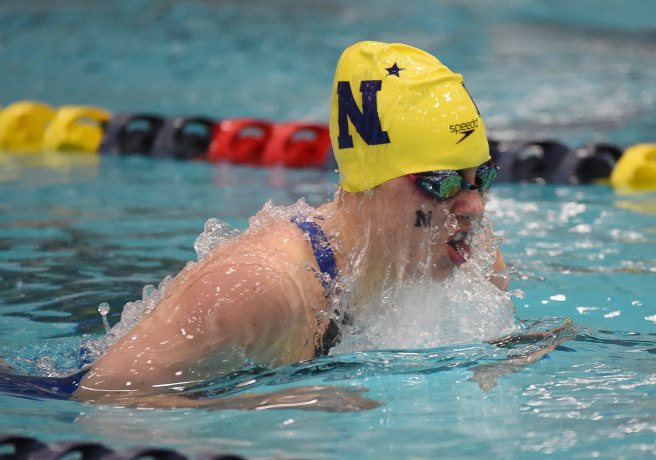 PISCATAWAY, N.J. –– The Navy women’s swimming team claimed its second title in as many years at the Frank Elm Invite held this weekend at the Sonny Werblin Recreation Center in Piscataway, N.J. The Mids accrued 1,804.5 points to outdistance second-place Columbia by over 500 points points in the 10-team meet that concluded Sunday.

Individually, Navy’s Lauren Barber (So., New Wilmington, Pa.) received the meet’s High Point Award. Her 118 points allowed her to narrowly edge Vera Koprivova from Rutgers for the award by just two points. Barber was one of five Mids to place among the top-five highest point earners.

“It was great to see the work on the details we have been doing in practice really pay off for us,” said Navy head coach John Morrison. “We are really proud of the team. They put in a lot of effort for this meet and they raced extremely well. There were a lot of tough and challenging swims in the meet. With it being a single gender meet, the rest time we normally have in between events at three-day championship meets was gone. But everyone responded well to the challenge.

“Our depth is about best it is has been here at Navy. That really showed through in this meet, especially in the relay events. And having that depth really allowed everyone to just go out and race really hard. It was a lot of fun to watch all of the heartfelt swims.”

Navy held a 100-point advantage after Friday’s first day of competition. The Mids began the meet with their top team in the 200 medley relay finishing in sixth place with a time of 1:34.99. Navy would then see four of its swimmers compete in the A final of both the 500 free and 200 individual medley events.

“Day one has typically been a strong day for us at this meet,” said Morrison. “We had a little sluggish start in the speed events, but then we really turned it around quickly and didn’t stop for the rest of the day.”

Navy would send at least three swimmers into the A final in four of the individual events contested during Saturday evening’s session to increase its advantage to 303.5 points.

Barber was back in the pool five minutes later for the A final in the next event, the 100 backstroke. Her time of 1:03.18 gave her a second-place showing behind the winning time of 1:01.87 set by Rachel Stoddard of Rutgers.

The final individual event of the evening saw a trio of Mids compete in the top final of the 100 backstroke. O’Reilly was Navy’s highest placing swimmer as she finished fourth with a time of 56.15. Touching the wall in fifth place (56.16) was Biz Graeff (Jr., Canton, Ohio), while Ally Warnimont (So., Winston-Salem, N.C.) placed eighth with a clocking of 57.41.

Navy capped the middle night of the meet by winning the 800 freestyle relay. The foursome of Margroum, Mayer, Lawson and Barber recorded a time of 7:21.82 to win the event by over seven seconds and break the pool record.

“Our aggressiveness on day one really carried over into day two,” said Morrison. “We came out of the blocks in the morning strong, starting with the first event, the 400 IM. That group really set the tone for the rest of the day.”

Sunday’s final session of competition began with the timed final of the 1650 freestyle event. A trio of Mids placed among the top-eight finishers in the event, with Runge leading the way with a second-place showing of 16:54.67. She was followed in third place by Smith in a time of 17:02.83 and Erin Jordan (So., Schnecksville, Pa.) in fifth with a clocking of 17:12.11.

Navy closed the meet in style as its foursome of Olivia Morrell (Sr., Albuquerque, N.M.), Lawson, Barber and Margroum combined for a time of 3:21.95 to win the 400 freestyle relay and establish another new pool record.

“It was great to see how we were tested and responded during this three-day meet,” said Morrison. “It sets us up well for the remainder of the dual meet season as well as the league championships in late February.

Navy is now off from competition until the annual Star Meet at Army West Point on Dec. 3.