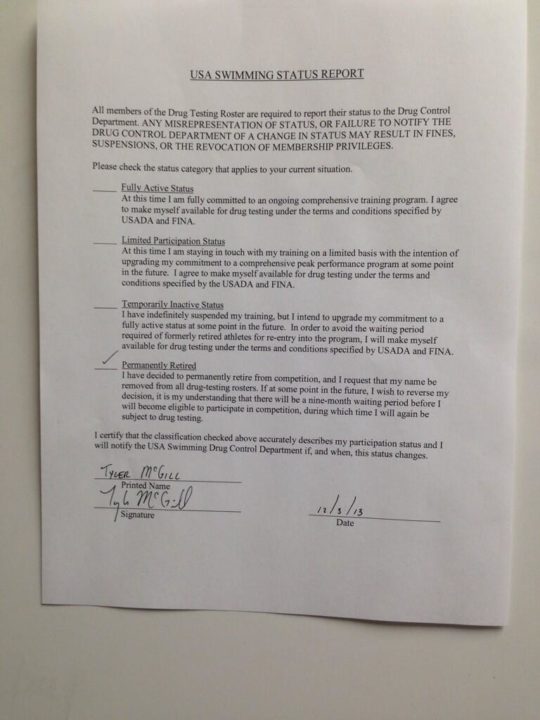 Tyler McGill, though the move was pretty-well set in stone over the summer when he accepted a job on the Auburn coaching staff, has officially submitted his paperwork for ‘permanent retirement’ to USA Swimming.

In the above picture, tweeted out this week by Auburn coaches, McGill checked and signed off on his letter to USA Swimming to remove himself from the drug testing pool. While the name “officially retired” is perhaps a bit misleading, this does mean that McGill, now 26 and recently a father, would have to wait 9 months to return to the drug testing pool. That would mean his soonest major meet would be the 2016 Olympics when he will be 29 years old, and so a reversal of his decision is unlikely.

He earned his spot on the 2012 Olympic team by coming in 2nd to Michael Phelps, but beating Ryan Lochte. McGill’s run at a third-straight World Championship team ended this summer in Indianapolis when he came in 4th in the 100 fly final. He then ended his elite competitive 100 fly career with a 3rd-place finish at the U.S. Open.

Thanks for a great career from a big fan in Illinois.
When Tyler was a senior in high school he did not swim the fly at the state meet, because his teammate Ross Moore was the 2nd best flyer in the state. Tyler’s school was trying to maximize points so Tyler swam other events rather than his best event.

Always a class act in my book.

I think Ross Moore won state too, he has a banner next to Tyler’s at the high school pool where they trained.

Incredibly Tyler is barely featured on the school record books though, because Dan Trupin has almost all of them.

Wow! Who will take the control of the US men’s 100 fly in the next few years?
I like making predictions but it’s very hard.
If MP comes back, he’s well ahead of the others.
If he doesn’t, Tom Shields? Ryan Lochte? Eugene Godsoe? Justin Lynch? Jack Conger?
One of the most open races of the moment in USA with no dominant swimmer.
😕