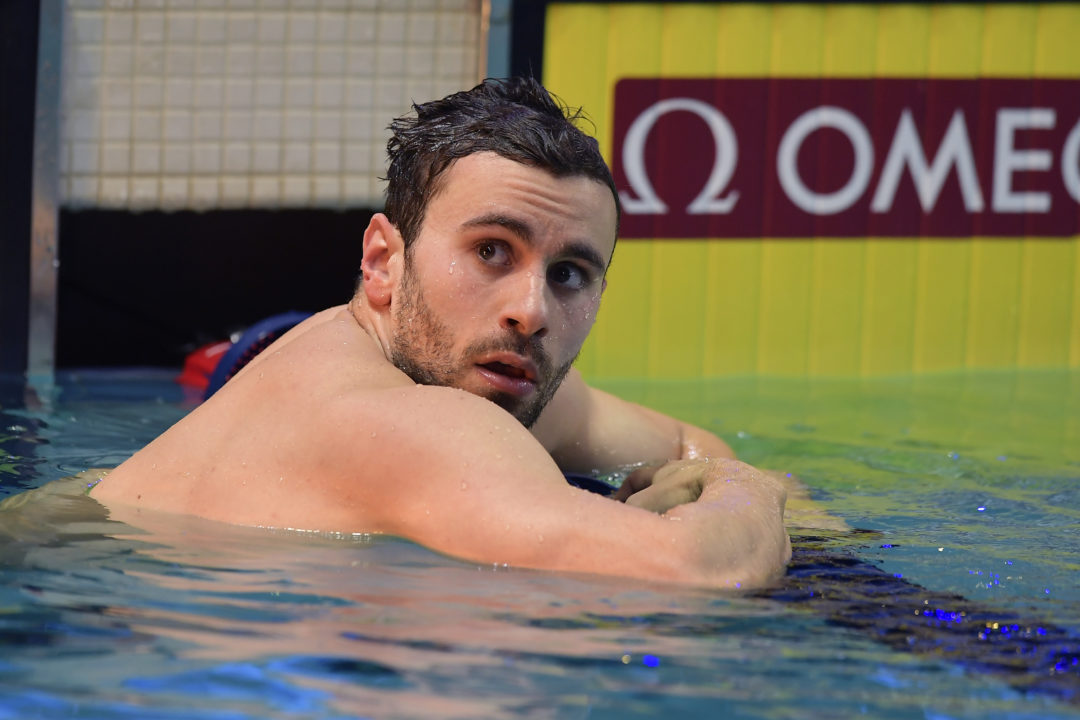 Blake Pieroni is the 2nd LA Current sprinter to defect north of the border to the upstart Toronto Titans this week. Archive photo via LaPresse - Fabio Ferrari

The Toronto Titans, one of 2 new teams that will join the International Swimming League (ISL) in year 2, have announced two more non-Canadians for their inaugural league roster.

“Adding Blake Pieroni and Anton McKee is a big deal for our team,” said Titans GM Rob Kent. “Blake is a superstar and is going to move us up in the team rankings, and frankly in credibility too. We’re pumped to have him on the Titans. I’m just as excited about signing Anton. It is pretty sweet when you find the 4th fastest breaststroker in the world. The other two things both of these guys bring to the team is they both still have that ‘fire in their belly’ about swimming – and they are both really fun and positive people! They’re the type of swimmers we want on our team.”

Pieroni is the 2nd American male sprinter that the team has announced so far, joining Chadwick in a men’s sprint group that will have a very south-of-the-border flavor next season. Pieroni has a little more range than Chadwick, able to go up to the 200 free and probably even the 400 free in a pinch. Pieroni is also a serviceable sprint butterflier, though he probably won’t be the team’s first choice there.

Last season, racing for the 4th-place LA Current, Pieroni picked up a win at the U.S. Derby meet in the 200 free in a time of 1:43.48. That meet, where he scored 16 total points, was his best performance of the season. In total, he earned 59 MVP points throughout the season, which ranked him 76th in the league.

At the Last Vegas finale, he finished 2nd in the 200 free in a lifetime best swim of 1:41.96, but just 8th in the 400 free – 6-and-a-half seconds behind the 7th-place finisher, his teammate Andrew Seliskar (but inside the minimum time standard). While Pieroni didn’t go any best times during last year’s ISL season, his best swim in the 400 free is much more competitive.

The 24-year old Pieroni won an Olympic gold medal in 2016 as a finals swimmer on the U.S. 400 free relay. He was also the 2018 World Short Course Champion in the 200 free, in addition to 6 relay World Championship titles.

The 27-year old McKee, who trained collegiately at the University of Alabama, was a versatile collegian who competed in breaststroke and middle distance freestyle races. As a pro, though, he’s gone essentially entirely to breaststroke races.

McKee didn’t participate in season 1 of the ISL, but as a swimmer who is better in short course than long course, he’s a good fit for the league’s short course meters format.

The holder of 17 Icelandic National Records, McKee performs well over all 3 breaststroke distances. In December at the 2019 European Short Course Championships, he swam lifetime bests in the 50, 100, and 200 meter breaststroke events. His best finish was 4th in the 200 breaststroke.

His 200 breaststroke time would have won at 6 out of 8 ISL meets last season, though his best from outside of a European or World Championship meet of 2:07.04 means that he’ll have to find ways to swim fast more often in the league’s multi-meet format.

Hayden is not picked yet why…???

Think they are rolling out a couple announcements each day instead of all at once. So Hayden might be coming soon

There are salaries. There were salaries last season as well, but those have increased substantially this year (as one would expect with an increase in meets).

But who pays them? The team manager from his pockets? (and/or his found sponsors?)

Ostensibly, the teams do. I’m not sure of all the inner financial workings of it, but at this point it’s hard for me to believe that any of the teams are covering their own costs, though I’m sure that’s the goal long-term.

I read about the Kent guy (Toronto Titans) he’s a financial analyst or investment dude… so are they only looking for ”well-off” / ”rich-like” folks to start teams as the’yre most likely the ones able to have the backing money to pay for the teams athletes?