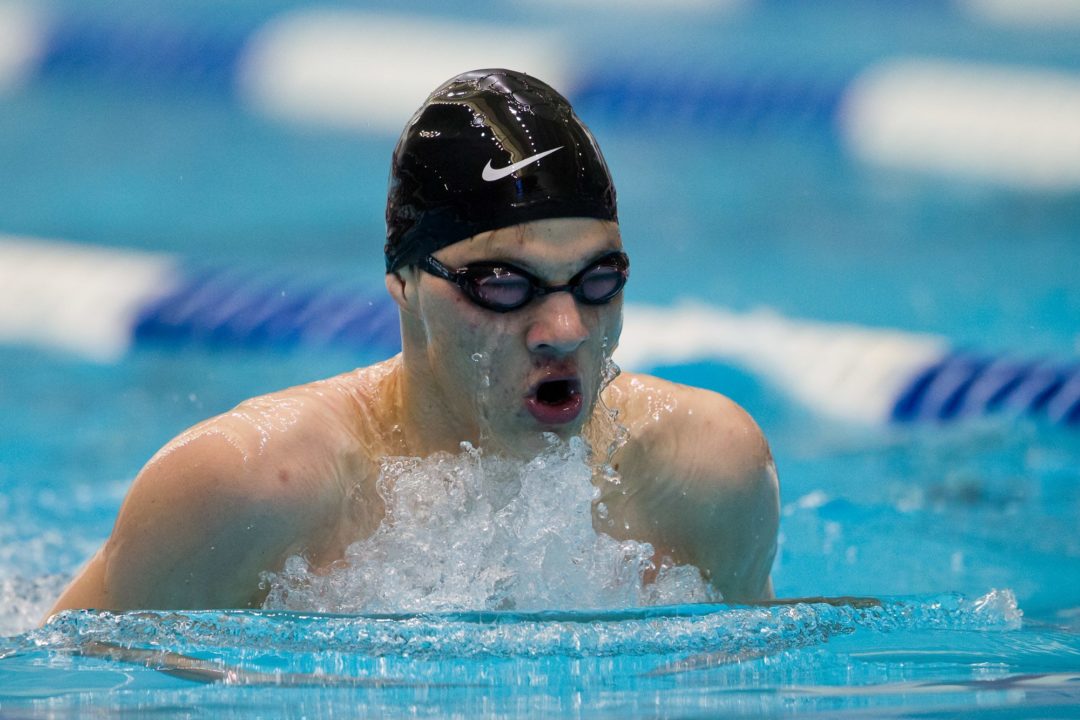 Minnesota got a big Colorado double-dip with Hatanaka (above) and Daryl Turner as they came in with the 12th-ranked class in 2013 (Photo: Tim Binning/TheSwimPictures.com)

It’s that time. There will surely be a surprise swimmer or two show up on college rosters when classes begin in the fall, but we’re relatively comfortable that most of the names in the class of 2013 are known, as are the transfers, and we’re ready to rank our top 12 classes. We’ll try and look at the classes as a whole and how they’ll fit in, as we’ve spent a lot of time gushing about the achievements about most of the top recruits.

Our methodology for rankings the classes weighs most heavily on freshman, though we have included transfers (appropriately discounted for how many years they have left). Obviously, immediate impact recruits will have the biggest impact on rankings, but we’re also looking around for depth, and which class might look the best in 2-3 years. We’ve given no bonus points for age or nationality of recruits, except in as far as it relates to their potential: a 17-year old who goes 19-point in the 50 free is weighted as being worth more than a 22-year old who does the same, but a 21-year old freshman who goes 19-point might be worth more than an 18-year old who goes 20-mid.

Similarly, we’re looking across the whole class. Not only which class is mostly to produce the most points at the 2014 NCAA Championships (aka, Conger and Murphy), but which class looks like they could produce the most points at the 2015, 2016, and 2017 NCAA Championships as well. We haven’t totally overlooked filling in scorers for the conference level, either.

Keep in mind that we can only rank based on those recruits and transfers that we know about, so if you think someone has been left out that would affect a class’ ranking, feel free to share.

We also haven’t included diving beyond the really big stars, simply because there’s not enough information available about diving commitments to accurately compare between schools.

Because we got a little carried away in the analysis (go figure) we’ve split the top-12 rankings into three installments. Below, find #’s 12-9; we’ll followed with 8-5, and then eventually 4-1, over the next few days.

(Note: we had Florida ranked #10 initially, as they listed Corey Main as a class of 2013 signee. Once we remembered that he ended up swimming at NCAAs, we bumped Florida out and Purdue up.)

Hatanaka, another native of Colorado, will join a growing Minnesota breaststroke group, with bests of 54.6 and 1:59.8 in the 100 and 200 yard events.

Maly is a member of this year’s World Championship team representing his native Austria, and is pretty versatile. His best races are probably the 100 (55.4) and 200 (2:01.9) long course butterflies, though his short course 200 is very strong. He’s also a fantastic IM’er, going 2:02 and 4:20 in the 200 and 400 in long course there. Overall, he’s been a good short course swimmer in his career as well.

Minnesota filled out their class doing very well in-state, which is important as high school and age group swimming improve in the state (and them having pretty much a stranglehold as the best swimming program in the state). Minnesota has lost out on a lot of good in-state recruits in the past, but it appears as though their reputation is improving.

This is a small-but-mighty class. The top recruit is probably Anze Tavcar from Slovenia: the best junior sprinter you haven’t heard of yet. He just turned 18 in December, and in April he was a 22.67 in the 50 long course free. He also goes 49.9 in the 100. It’s been a long time since Indiana had a freestyler of that capability, though Daniel Kanorr stepped in very well as a senior to score in the 50 at NCAA’s last year.

Jackson Miller is a phenomenal athlete and split his time at Las Lomas High School between the swim team, and quarterbacking the school’s football team. Now focused fully on swimming, expect big drops under Ray Looze’s tutlage. Miller’s best times are 20.9 in the 50 free, 44.2 in the 100 free, 1:35.8 in the 200 free, and 4:23 in the 500 free. Those last two times are particularly impressive given his split-sport history.

This is a class with a lot of potential, but also a lot of unknowns. Whitney Hite raided Texas this year, taking the state’s two best recruits (very few of the top Texans stayed home this year). Cannon Clifton is a 20.3/44.0 sprinter; the Wisconsin men’s sprint group has been pretty dreadful: their 400 free relay beat only a DQ’ed Indiana squad at Big Tens, and were a second-and-a-half slower than Michigan State. Clifton’s presence gives them instant credibility in those relays. He’s also a 49.3 and 48.4 in the 100 back and 100 fly, and may be called on to fill many roles as Hite builds up his program’s depth.

Clifton is joined in the breaststroke group by Wisconsinite Alex Delakis, who is a 54.5 in the 100 breaststroke and could very well be on a sprint free relay as well.

They also added Brett Pinfold from Houston, who is 44.1 in the 100 free and 1:36.4 in the 200 free. Between the two of them, Wisconsin immediately drops at least two seconds from their 400 free relay, and the addition of 45.0 freestyler Ryan Barsanti should help too.

Nicholas Caldwell comes in from Florida; when coming out of high school, he was one of the better distance recruits we’ve seen. Two years in Gainesville didn’t work out for him, but his potential is sky-high. He has bests of 1:35.9 in the 200 yard free, 4:17.2 in the 500 yard free, and 15:05 in the mile. If his training gets back on track, he will probably be asked (at least year 1) to participate in at least the 400 free relay as well.

Maloney and Hutchins are two of the best junior middle-distance swimmers in Oceania, which gives Elliott a strong group to train with.

Wisconsin is still going to be a team with a few stars, but middling overall performance, for the next few seasons, but this class is a fantastic start to the building process. If they land another class like this, expect them to be back battling for top 4 finishes in the Big Ten by 2015.

He went the time short course meters at last years world championships, finishing only 2 seconds behind eventual B10 Champion in the 400 IM Michael Weiss in prelims.

This is correct he did, I originally had it implied to be a long course time, though that has been corrected.

Thanks WisconsinFan. Added him in – though probably not enough to bump them to top 8.

Do you think we can do a recruit page for the top Canadian universities?

PhelpsFan – if we can find the information we can certainly do it. It’s a little tougher to track down info for schools in the CIS, though.

Because Canadian universities don’t sign athletes with letters of intent, it’s hard to know who is really going where. In the words of a great CIS coach, “We’ll know when they’re standing on deck in September.”

Corey Main swam for Florida after the semester break this year.