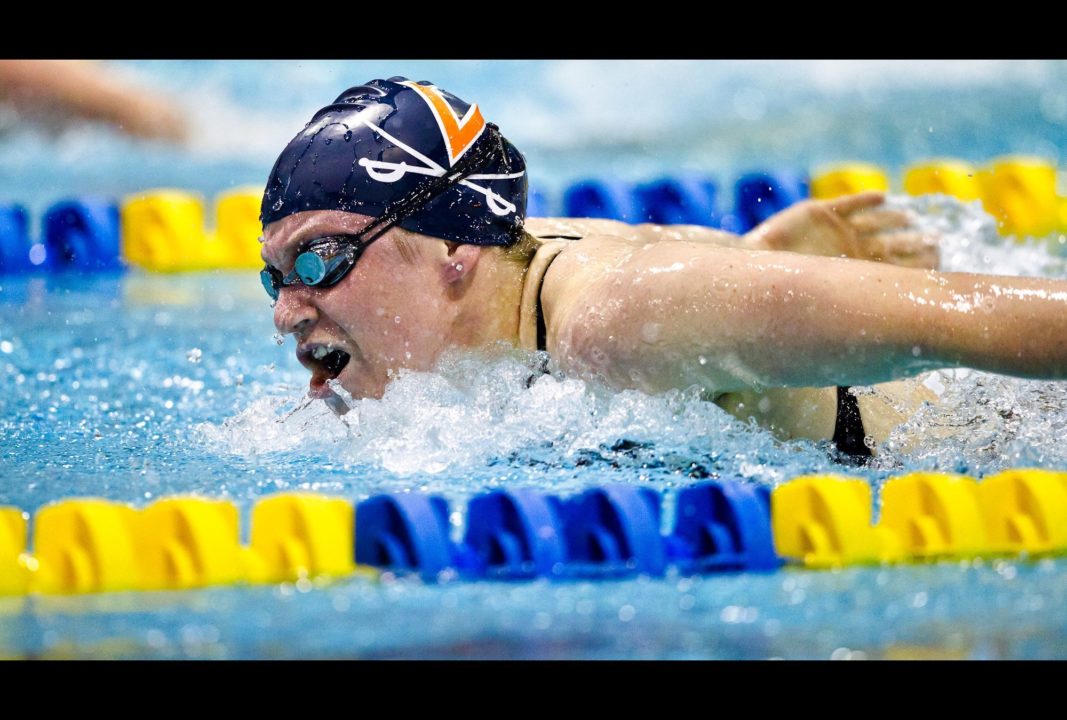 Sources close to the Busch family tell us that Sammy Busch will be the new assistant coach at the university of Virginia, under the direction of his brother and head coach, Augie Busch. (Photo of junior Alison Haulsee Credit: Tim Binning, TheSwimPictures)

Although it has not been officially released, sources close to the Busch family tell us that the University of Virginia will be hiring Sammy Busch as the new Assistant Coach. Sammy’s brother, Augie Busch, was hired as the head coach yesterday.

As reported yesterday by Braden Keith:

Wasting no time, and despite a call for a moratorium on hiring from alumni, the University of Virginia has hired Augie Busch as their new head coach they announced this morning. Busch comes to the program after just two years as the head coach at the University of Houston.

The 37-year old Busch stepped into a difficult situation with the Cougars, after their previous head coach and local legend Mark Taylor passed away tragically at the NCAA Championship meet the year before, and he steps into another difficult one as a fight apparently rages still to reinstate the former head coach at Virginia, Mark Bernadino.

Bernardino retired after 35 years with the program. This came as a surprise to many, and those close to the program are still fighting for his reinstatement.

Sammy Busch was an assistant coach at Auburn University last year. He was primarily in charge of the backstroke and freestyle groups as well as being the director of junior recruiting. The year prior he was a volunteer assistant at the university of West Virginia.

The Busch family has a lot of ties to the swimming community. Their father, Frank Busch, is the USA Swimming National Team Director.

Does not Nepotism present its own potential problems?

Nepotism strikes again! Maybe Frank will come out of retirement to join the staff

What is happening?!? Someone called up to USA Swimming and asked Frank Busch for a recommendation, so he says “hire my son!” then they ask Augie if he has any assistant coaches in mind and he’s like i’ve got the perfect guy for the job. One week later we have the Busch family taking over Charlottesville.

AND your point is?

It’s important to point out that there is not a fight raging to reinstate Mark. PERIOD. Are we disappointed in how the whole situation transpired? YES. Do we still want a full review of the actions taken by the Athletics Director and his staff by our president, Dr. Sullivan? YES. Do we support our new coach, Augie Busch? ABSOLUTELY. To be clear, we did ask that the search for Mark’s successor be placed on hold until a review was conducted. However, we understand the possible effects of the timing of Mark’s departure. And obviously the administration felt it was necessary to move quickly to find a new coach. We look forward to the getting behind Coach Busch and believe the… Read more »

Makes perfect sense to be supportive of Augie. He had nothing to do with Dino’s ouster and his taking over at Virginia under less than ideal circumstances is testament to how well regarded UVa swimming is.

It’s also pretty clear that there are still some raw emotions in ‘Hooville. Is the animosity solely directed at Littlepage or is some of it directed at Sullivan as well?

Don’t presume to speak for everyone. There are still those of us who are fighting to correct this wrong and get Mark back.

How can you support a coach with so little integrity as to take the job under these circumstances?

And then instead of announcing Mark will get him up to speed and assist on deck he hires his brother.

You have been played by Littlepage and Oliver and are NOT helping the team or UVa by supporting this wannabe.

UVa stands for honor and integrity, not back stabbing, power grabs, and oppprtunism.

Disgraceful episode which isn’t over yet.