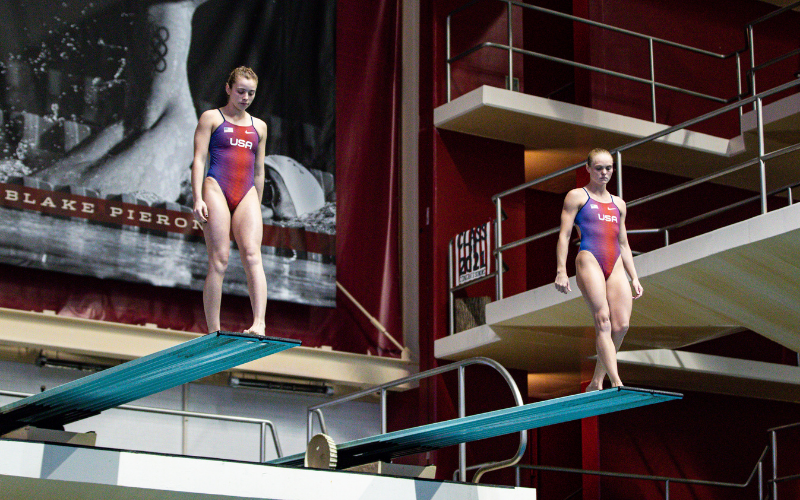 The Longhorns are spearheading the team scores so far at the Texas Diving Invitational. On day one, the men’s competition was a tight race between the Longhorns and Texas A&M who trailed them by six points. Arizona and LSU women had a great showing on Thursday with three divers each in the women’s 3-meter final.

The Longhorns finished day two on Thursday with a 1-2 finish on men’s 1-meter from freshman Nick Harris (396.70 points) and junior Noah Duperre (372.55 points.) Harris was the 1-meter Junior National champion in 2019 and more recently won silver in the synchronized 2-meter springboard event at the 2022 USA Diving Open Championships.

His teammate Duperre narrowly outscored 3rd place finisher Jack Ryan of Stanford who earned 369.25 points. It was a tight event with only about 10 points separating 2nd place and 5th place.

On the women’s side, Olympic silver medalist Delaney Schnell of Arizona won women’s 3-meter on Thursday night with 372.70 points. Schnell is a fifth year this season and is coming off a silver medal win in the 10-meter platform event at the Tokyo Olympics. She also won bronze in the mixed 10-meter platform at the 2022 FINA World Championships and has been the Pac-12 champion on platform and 1-meter for the past two seasons.

Schnell was followed by sophomores Chiara Pellacani of LSU (366.15) and Hailey Hernandez from Texas (346.00) points. Hernandez is also a Tokyo 2020 Olympian; she placed 9th on 3-meter.

Arizona and LSU each had three divers in this final while Texas had a 3-4 finish from Hernandez and junior Bridget O’Neil (342.55) to maintain their narrow lead in team points over LSU.

Wednesday featured a new kind of scored diving competition in the form of a combined men’s and women’s team event final. Each team was represented by three divers from each gender who competed in two options on 1-meter, 3-meter, and platform. Men were required to do arm stands on platform and women were allowed to double up on any of the categories.

“It’s really exciting that The University of Texas can host what we believe is the first-ever NCAA team event for men’s and women’s diving,” Texas head diving coach Matt Scoggin said in a Texas press release. “We’re hoping to be able to get it into the NCAA’s in the future.”

While full results from Wednesday have not been made public yet, Texas won both the men’s and women’s competitions according to their press release. Utah must have also performed well as they are in third place in combined team scores but had no finalists on Thursday. Team scores have only been made public for the team competition on day one. Note that Arizona did not have enough divers to compete in the combined team event on Wednesday and that is why they are not included.

Day three will kick off Friday at 10 AM Central Standard Time with the prelims of women’s 1-meter followed by the prelims of men’s 3-meter. Watch out for Texas’ Duperre and Texas A&M junior Victor Pozner who placed 10th and 15th, respectively, in the men’s 3-meter at the 2022 NCAA Championships. Hernandez is coming into the 1-meter event with the most experience; she placed 4th on 1-meter at last season’s NCAA Championships ahead of Schnell in 5th place.