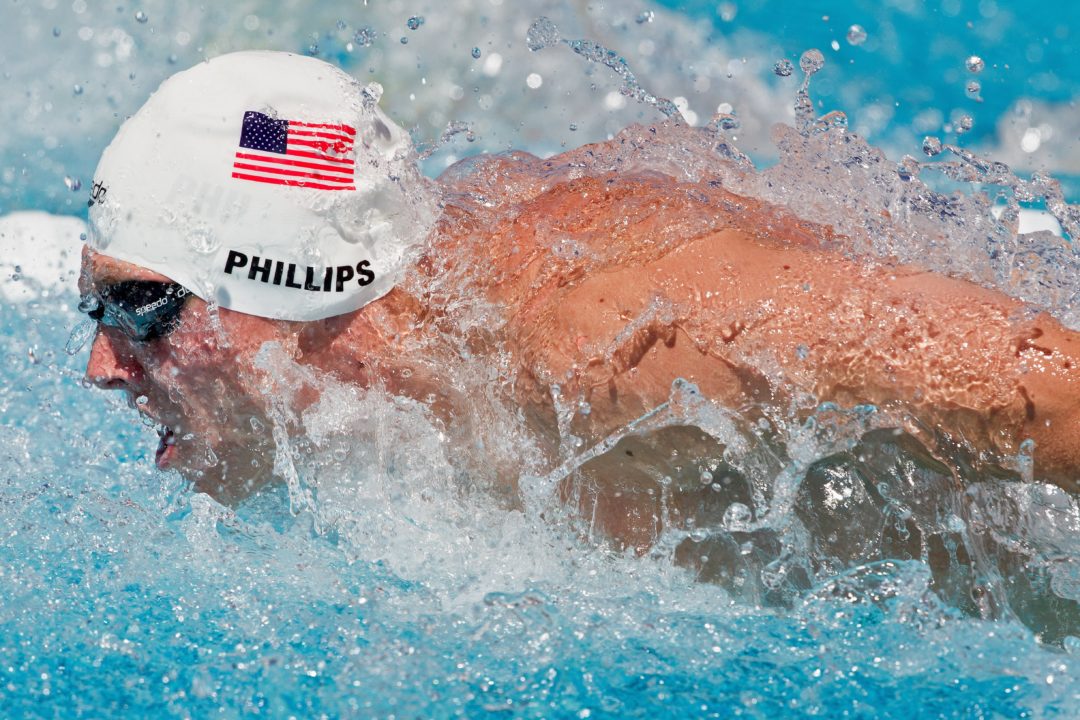 Tim Phillips will swim the 100 fly at the 2015 World Championships in Kazaan, Russia. Archive photo via Tim Binning/TheSwimPictures.com

American swimmer Tim Phillips will replace Michael Phelps in the 100 fly on Team USA’s roster for the 2015 World Championships in Kazan, Russia.

“It’s unfortunate about the circumstances regarding (Michael Phelps), but I am very grateful that I get to go and believe I deserve to be there,” Phillips said.

Phillips will occupy the spot that was vacated when Phelps and USA Swimming agreed that he would withdraw from the team after Phelps was arrested for DUI. Phillips’ swim of 51.49 in the 100 fly from the U.S. National Championships in August made him next in line for that spot, and he’ll join the National Champion Tom Shields (51.29) on the American team in that event.

The two will also likely be given the first shot at prelims and finals swims on the 400 medley relay, though Ryan Lochte (51.55 at Pan Pacs) should be a consideration there as well. Out of the 10-fastest Americans in the 100 long course fly last year, Lochte was the only swimmer to swim a best time at a meet other than U.S. Nationals, showing an ability to both swim well at the qualifying meet and still improve to the next meet.

In short: the Americans have a lot of great options for that relay with the deepest 100 fly group in the world, and will have a full meet to figure things out.

Phillips says that he is finishing his degree up at Ohio State this semester, which he described as being “extremely important” to him. In January, he then plans to head to SwimMAC Carolina full-time – he’s split his time between Ohio State and SwimMAC for much of the last few years.

Hmmm…comments about un-huge butterflier. Has anyone ever heard of Tyler McGill?

And comments on Shields – Did you all miss his 200 swim in Irvine?

LOL. US Nationals? LOL. Shields is a choker when competing internationally. Chad will eat him in the fly events in Kazan.

if theyre so easy to win, how many us national titles ya got?

The only man who can replae Michael is Lochte,noone else can’t doing this

Chad will win 100 and 200 fly easily. None of the current Americans will give him any competition. Tom Shields is a choker and a liability in the LC while Phillips is another unproven internationally.

I’ve been around him numerous times at OSU. He is more like 5’9 1/2. Probably 160ish. Biggest thing with him is his turnover. It is like spinning a whistle on your finger around the pool deck, sure quick circles and kid has good but not great under waters. So he gets the most out of his strokes and can turn over real quick-means good efficiency.

Congrats Tim! It is great to see a YMCA and Ohio State swimmer at Worlds.

Great job Tim, I remember you from the WV states ..

I suspect I feel like most folks do about this: Both sad that Phelps won’t be swimming the 100 fly at Worlds, and also glad that Phillips gets the opportunity to do so. The talent is there and if the stars align well, he even has a shot at a medal. By the way, how big is he/stats? While smaller 200 flyers can excel if they offset their size with superior technique it’s unusual for a 100 flyer to be able to do so.

what counts is his motivation and quality of swimming . MC Evoy , whil enot being very tall can do wonders on 100 free which is unusual on that distance . Hagino , while not being very tall is seriously tough on the 200 free while Agnel ( of one the best 200 freestylers ever is around 6’8″ like Grevers ) – again , size didn’t stop those amzing swimmers to excel where they want to .
Good luck to Phlilips , he deserves this . Usa is absolutely well equiped with the 100 fly to shine next year . Phillips , Lochte + Shields .