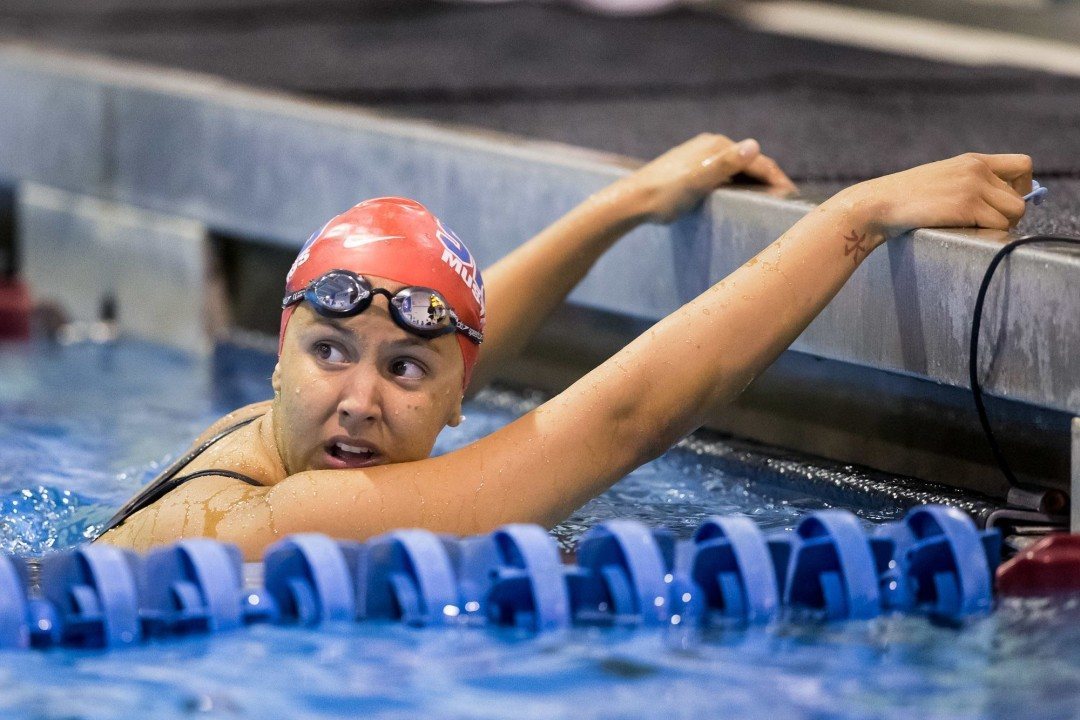 SMU senior Isabella Arcila tied or broke the AAC record int he 50 free three times on Thursday as the SMU women opened up a 50-point gap on the field on day 2.

Three Meet Records went down on the 2nd day of competition at the 2015 American Athletic Conference (AAC) Championships in Greensboro, North Carolina, and the SMU Mustangs vaulted into the lead of both the men’s and women’s standings with two days of competition left.

With the conference being sort-of a carryover from the old Big East, but not in the sense that they didn’t carry forward the old Big East records, this is only the second AAC Championship meet in history.

The record-setting began early, as the all-time Conference Championship marks went down in both the women’s and the men’s 500 free.

First up was Cincinnati sophomore Jacqueline Keire, who repeated as the champion in the 500 free in truly dominant fashion – swimming a 4:42.68. That broke her own Meet Record of 4:43.02 set last year.

Historically, Keire has been a little better in the 200 than the 500, so she’ll still have that opportunity to seal up her NCAA qualification, but based on history, that time in the 500 free will put her squarely on the bubble for an invite.

She finished almost five seconds ahead of UConn senior Kaitlyn Munzenamier, who earned 2nd place in 4:47.57, and East Carolina’s Lauren Chew, who was 3rd in 4:49.83.

That broke the year-old Meet Record held by UConn’s Christopher Grigg in a 4:19. Unfortunately for the sophomore Grigg, he wasn’t able to match that effort and challenge Scherubl, as he took 2nd place this season in just 4:24.56. The two were close for the first 200 yards, but Scherubl improved his speed over the next 200 to open up a big lead, and hammered it home with a 52.0 closing 100 split.

Those two teams, with dominant distance groups, started to gain some separation after that race from East Carolina.

The East Carolina men, however, would claw back into the battle with a 1-2 finish in the men’s 200 IM. That was led by senior Rokas Cepulis, who swam a 1:45.61 to win.That’s his lifetime best in the event by two seconds.

He was followed by sophomore teammate Fran Krznaric, who also swam a lifetime best, in 1:45.73. The two swam very similar races, and were in a dead-heat going into the last 50, but Cepulis had just enough to get his fingertips on the wall first.

In the women’s edition of that event, it was SMU who was dominant with a 1-2 finish of their own. Senior Rachel Nicol won in 1:59.49, and her teammate Kirsty McLauchlan was 2nd in 2:01.57. Nicol is a breaststroke specialist, and that showed in this race: she split three seconds better than anyone else in the field on that leg alone.

While SMU took the top of the podium in that race, East Carolina actually earned an identical 46 event points to maintain a narrow lead.

This time, it was the Mustangs’ turn to fight back, however, and with five of the eight A-finalists, they fought back big. Senior Isabella Arcila (22.25) tied her own Meet Record from prelims, and her classmate Nathalie Lindborg was 2nd in 22.39.

They both out-raced the defending champion Chinyere Pigot from UConn, who was 3rd in 22.89.

As mentioned, SMU put five swimmers in the A-Final, while East Carolina’s top finisher was 11th-place Anastasia Amoiroglou (23.57). This push the Mustangs to nearly a 40-point margin, which after that individual performance they would predictably extend in the 200 free relay.

Arcila led off that relay in 22.21, breaking the Meet Record again, and was joined by teammates Tara-Lynn Nicholas (23.14), Marne Erasmus (22.73), and Nathalie Lindborg (22.63) en route to a 1:30.71. That was about a second slower than an SMU relay with three of the same swimmers went last year to win the title, but we’ll likely see an SMU time trial in the event to earn their “B” standard and a spot at NCAA’s.

Cincinnati took 2nd in that relay with a 1:32.66 – the Bearcats overall had a much better day on Thursday than they did on Friday, though they remained in last place.

In the last two events of the meet, the women’s meet from a very close, competitive team race to a 50-point SMU advantage.

The men’s meet, on the other hand, would end very differently. This time, it was the ECU Pirates who did damage in the 50 free by taking three of the top five finishing spots. That was led by senior Nikola Simic in 19.87, with support from 4th-place finisher Trevor Irish (20.37) and 5th-palce finisher Shawn Hunter (20.51).

While that would momentarily put ECU into the lead, SMU fought back with their star divers going 1-3, including a repeat performance from senior Devin Burnett (341.40). In between them was UConn’s John Brice, and SMU had four A-finalists overall.

The SMU women will expect to build their lead on the meet’s third day Friday, but the men’s should be a see-saw affair. While ECU will dominate the 400 IM scoring, SMU has a big advantage in the 100 fly with three of the top four seeds. The rest of the day’s events on the men’s side are a pretty even tossup between ECU and SMU, so expect the small scoring differential to remain headed into the meet’s conclusion on Saturday.