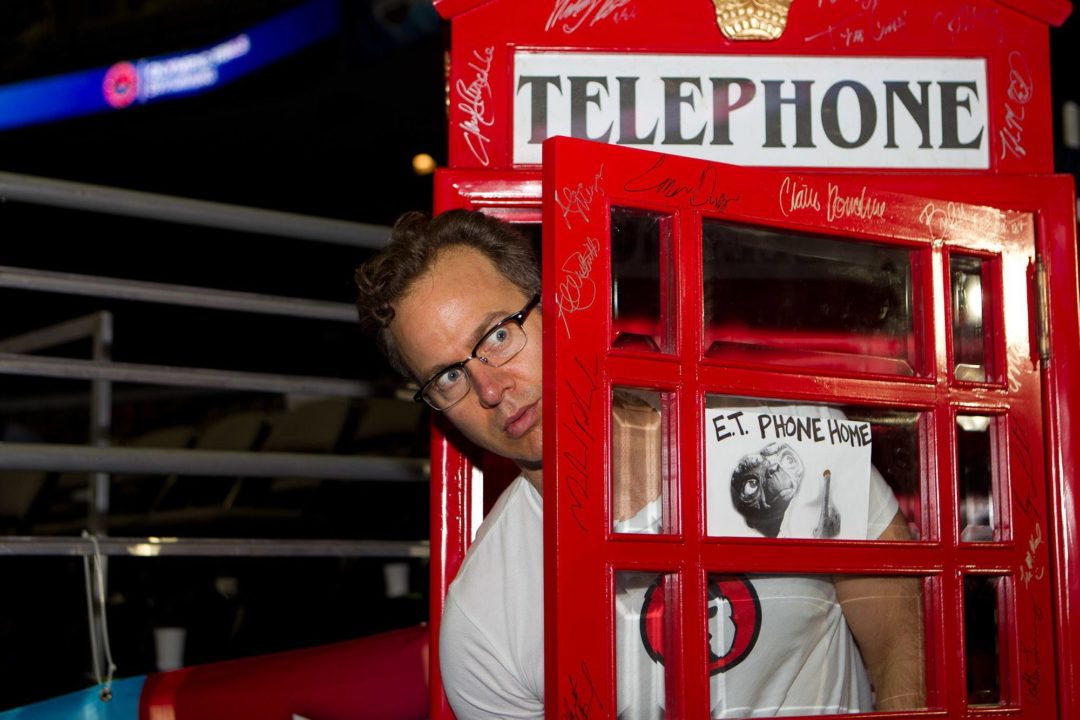 I had a really awful haircut when SwimSwam went to its first Olympic Trials in 2012, so here's a picture of Mel playing in the phone booth instead. Archive photo via Tim Binning/TheSwimPictures.com

That’s not a milestone that we’ve been eyeballing for long. One of our writers, Ben Dornan, noticed this evening as he was doing a European Championship wrapup post that we were nearing the mark, and we couldn’t let that moment pass without marking the occasion. But, that’s what we do here, that’s what we’ve done from the beginning: we react to the moments.

It’s kind of wild to stop and think about 100,000 posts, and all that has been included in those posts. It is not uncommon that I’ll reference a post that I wrote many years ago, and have zero recollection of having written it. I was not a prodigy swim nerd. I vaguely remember watching an NCAA Championship meet that the Georgia women were winning at some point in the late 90s (which doesn’t narrow it down much). I don’t think I really had any idea of what all was happening in this sport.

SwimSwam officially launched in March 2012, just before the NCAA Championships. The original vision by my co-founder Mel Stewart was a video-driven site, a television channel to put a shiny veneer onto swimming. The addition of me, to push the written and editorial side of the business, was almost an afterthought.

But it quickly became clear to us what was going to feed the machine. We developed a vision for SwimSwam to become a central hub for the sport, to give swimming the coverage that our colleagues in basketball and football and baseball and other such sports have had for years. A full-scale, top-to-bottom indexing of the sport, from age group standouts to college decisions to Olympic gold medals.

We never intended to be the Metaverse (Don’t sue me Zuck) that occupies every space in swimming or stands as a single pillar; rather, the goal became to provide a bedrock foundation to the sport that could be built upon. We wanted to serve as a reference point for the narrative of swimming. We wanted someone who was writing a book about swimming in the future to be able to reference our content to know what was really happening in 2012, 2013, 2014, when memories became fuzzy. We wanted mainstream media who tiptoed into the shallow end every few years when Michael Phelps did something cool or when the stories of Olympic heroics transcended the walls of our natatoriums. We wanted to occupy a space that was so often overlooked by local papers, and bring context in a language that swimmers speak.

I don’t know that any of us really had a vision of the way this would manifest into the self-perpetuating animal that it is today. We just knew we wanted to work hard, we wanted to celebrate the sport of swimming, and we wanted to try something interesting.

So many people have contributed to these 100,000 posts, from guest contributors like swim parents and data analysts to former staffers, podcast guests and advertising partners.

We’ve had posts contributed by those as young as 6, and as old as 90. We’ve had contributions from Olympic medalists, and those who didn’t make it past summer league; from hall-of-fame coaches and swim parents; from dozens of countries and 6 languages; from some of history’s great young phenom swimmers and from those who got a late start.

To all of those people, contributions big or small, who have chipped in, I owe a massive debt of gratitude. While about 15% of those 100,000 posts are mine, SwimSwam wouldn’t be what it is without the other 85%. The other 85% is what makes this place special. I won’t even attempt to start naming names, because I know that would inevitably leave someone out, and to do so would keep me up all night.

I want to say thank you to my partners and co-founders, Mel, Tiffany, and Garrett. I’m sure I ramrodded you more than once in the early years, but over the last 9-plus years, I think we’ve made each other better.

And to you, our readers, our commenters, for better or worse, I think my life would feel empty without y’all, and I hope, at a minimum, we scratch some itch, feed some need, or if nothing else, provide some entertainment.

I’ll leave it there for now. I’m probably going to have to write another one of these in a few months for our 10 year anniversary, and I’ve gotta save a few of my thoughts for that.

Good luck at your meets this weekend, and enjoy the rest of the week’s ISL action.

Working with you every day is one of the true gifts that SwimSwam has given me. If I had a dozen Giusy Cisales, I think I could run any company in the world.

SwimSwam is the most productive blog on internet, and not just a swimming blog. The amount of articles and videos they make is just amazing.

I can’t wait that long, I say we deserve it for the 10th anniversary post

Incredible tribute. I still remember switching over to SwimSwam as my go-to swimming news site, from a different swimming news site 7+ years ago – and being instantly impressed with the quality of the content here.

And randomly, I also remember not initially liking the “SwimSwam” name very much – but that grew of me fairly quickly!

Lots of respect for all the work the team puts into this site. For helping a sport that I love grow =)

A downvote? Why is the down voter even on this site then?

I hated the name too. But, in Mel we trust. That was one of our first fights.

It works most of the time, but imagine when we’re calling to confirm sources on things like the Klete Keller story and have to say we’re from “SwimSwam”…

LOL…
You guys and gals really are the best, regarding swimming. Loves me my daily swimming fix, and that “Mel in the phonebooth” pic IS funny. But yeah, that Klete Keller story is another matter completely. Oh, the horror…the horror…

What were some of the other names you guys were throwing around?

If I’m honest, they had picked the name by the time I came on board. I was the last co-founder added. I’ll ask Mel.

Braden assigned me this post the moment he saw your comment. So, gotta write it now. This story has a lot of backstory…

Ha! Sorry to add to your plate but can’t wait to read it!

No worries…Braden keeps the narrative honest and endlessly ongoing…. So, will get it done…

And were any of them “meta.com”?

At least it probably wasn’t difficult to lock down the swimswam.com domain name.

i have a cousin who works with USA Volleyball and we discussed SwimSwam and tried to come up with a similar name for a volleyball all-encompassing news site. Best we came up with was ‘SpikeSpiked’. Just doesn’t work like SwimSwam.

I guess so. The sites look is very familiar. I liked ‘DigDug’. No idea what VolleyMob means.

Before I became a regular SwimSwam reader I would only get excited about swimming when there was an Olympics or World Championships and every March when NCAAs rolled around. Now, thanks to SwimSwam, I obsess about swimming daily. Thanks(?)

its just your daily prescription of swimswam

Been a fan of the site since 2013 before the WC and was amazed about the live content ever since. Congrats guys! Keep up the good posts

This website has brought me so much joy over the last few years. Thank you Braden!

Congrats to everyone involved. You’ve transformed how swim fans follow the sport and we’re so grateful for your work!

As we are for your work too!