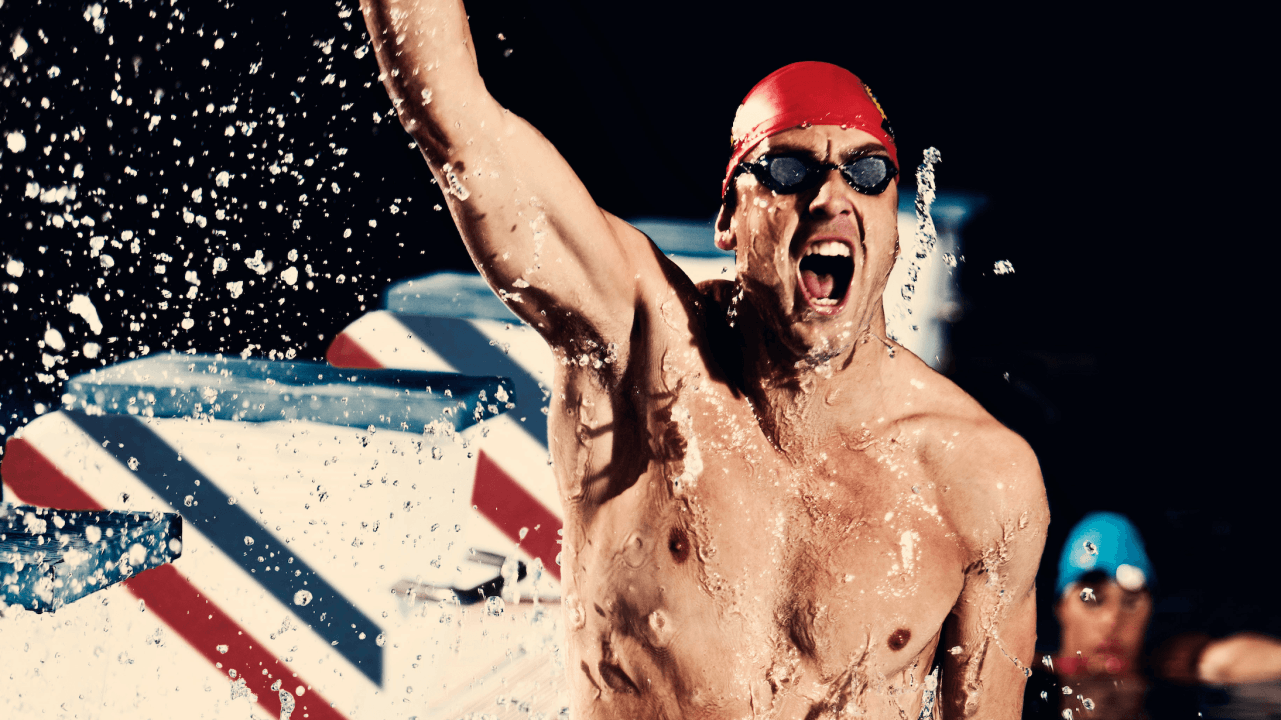 Disclaimer: SwimSwam does not endorse all of these swimming pool games. Some are dangerous. Some, which are not so dangerous, will, however, enrage lifeguards and probably get you booted from your community pool. Stock photo via Funky Trunks

Disclaimer: SwimSwam does not endorse all of these swimming pool games. Some are dangerous. Some, which are not so dangerous, will, however, enrage lifeguards and probably get you booted from your community pool.

– 7 players on each team

– two goals on either side of the pool

– an invasion game, one team strives to get their ball in the opposing team’s goal

1a. Murderball. Like water polo, but without much in the way of rules. One variation involves a standard water polo goal, others involve putting the ball in the gutter and holding it there for a 5-7 second count. Best saved for post-season, though, as this one can get a little rough.

Swimming Battleball is like water polo, but with more teeth and grit. Played in the 1970s and 1980s during first weeks of fall practice, this two hour marathon of war is an ideal way to get swimmers’ their feel for water back fast.

– Divide your swim team up, no matter how big.

– Split the pool in half. The deep end, if you have one, is the playing field. The back field is for two swimmers only from each team.

– Time on the clock? You play the entire workout, treading water the entire practice.

– The goal is a plywood board into which you cut a large hole.

– This is a two-ball game, ideally big balls, beachball-sized. The objective: get your big ball through the hole. Keep your opponent’s ball shutdown, or in the back field.

– You can dunk the person holding the ball (but SwimSwam’s not responsibility if you do as we’re merely reporting the rules).

– Once your team scores, one swimmer from the goal-scoring team, jumps out, grabs the ball, throws it to their player in the back field. Repeat.

***NOTE, many teams win by dominating the opponent’s ball. Often a strong Swimming Battleball player can simply bear hug the ball and lay on it, suffering multiple dunks without releasing the ball.

Sharks and Minnows is as old as swimming. Cavemen painted it on walls… Ok, maybe it’s not that old, but swim teams and summer leaguers have been playing it since the 1950s  You know the rules, but why not make the rules work for your development and success. Try our version,  SwimSwam Sharks and Minnows.

– Always play the length of the pool, not the width, preferably in a 50 meter pool to test your skill.

– Pick your shark, the best swimmer on the team.

– Staying underwater isn’t enough for the shark not to get you according to SwimSwam Rules. You have to stay in a tight steamline position as you kick underwater to the other side. No streamline, you’re shark bait.

***Disclaimer: We use these rules to encourage tight underwater streamlines, but don’t push yourself too much. Swimmers can blackout if they hold their breath too long. Remember this is only a game. Breathe if you need to breathe.

Whale is nothing more than running on deck and jumping over the swimmer in the pool. We’re not a fan of this game. It’s popular, but it is not safe, and, frankly, most swimmers, hardcore swimmers, aren’t that agile on land.  Whale is #4 on our list, but we if you play this game, be very, very careful.

Bean is famous…was made famous by SwimSwam co-founder Garrett McCaffrey, when he actually captured it on video many, many years ago… meaning 2007. Alas, the video is now gone from the web. (If anyone can find it, please forward the link.) The Rules? I don’t know the rules. They’re lost to time and the suckhole of the web. I know elite swimmers played it. I know Michael Phelps played it. I know it resembles a watery form of tag, though passive and sneaky, often executed during warmup or long distance sets. If you know the BEAN RULES, please educate us and share in the comments below.

After enormous research, the evidence is fairly clear. This games suffers from more cheaters than any other in the world.  You know the rules. One person is it. They have to close their eyes and try to find the other players. They shout “Marco” while the other players are supposed to shout “Polo” in response, but that’s rarely the case. If someone’s close to the person yelling “Marco,” they stay silent. Moreover the person yelling “Marco” tyically sneaks a peek. This game is lame, though wildly popular, which is why it comes in at #6.

This is easy and always a winner with kids.  Throw a few hundred dollars in change in a pool, and let your swimmers work on their underwater speed scooping all of it up.

This game is even better for working on underwater speed, though peta might not approve. I played it at my summer league banquet party every year, and always got several goldfish for my fishtank.

If you haven’t played this, or watched it, you’re missing out on a simple pleasure in life.  Lather up a watermelon with Vaseline and throw it in the pool. The first people to get it out is the winner. The game always gets bogged-down in a twist of arms, a pile of people, and typically the watermelon slips out and someone quickly rushes it to the edge of the pool or shoreline for the win.
Watch this video until the end to see what we mean:

What are some interesting swimming pool games you like?

I am 22 and I still play games with friends and others at the pool like ‘hold your breath the longest’. I thought some of these other pool games on the article’s list, such as shark and minnows are just for little kids. Then again, some adults play little or no games at a pool and don’t even swim. They just hang out there to just talk.

We have a fairly large dive tank at the high school where we hold our practices, I have my kids put their fins on and play tag in it (just like they would on a playground just minus gravity). Extremely exauhsting, but the kids had a blast and fairly safe.

Bean should not be talked about. Shame!

Underwater rugby is not on the list, but a greased watermellon and jumping over someone is.I’m a bit disappointed, came here to find playful exercises to make swimming less boring for kids.

I was not expecting a list as good as this – you actually covered some of the lesser known, but completely awesome, swimming pool games. I mean, Marco Polo has to be on the list, but a greased watermelon?? That is just too great and I bet most pool owners did not know about this game. They even make a watermelon ball that sells on amazon in case you don’t want to use a real watermelon. Great blog post – thank you.