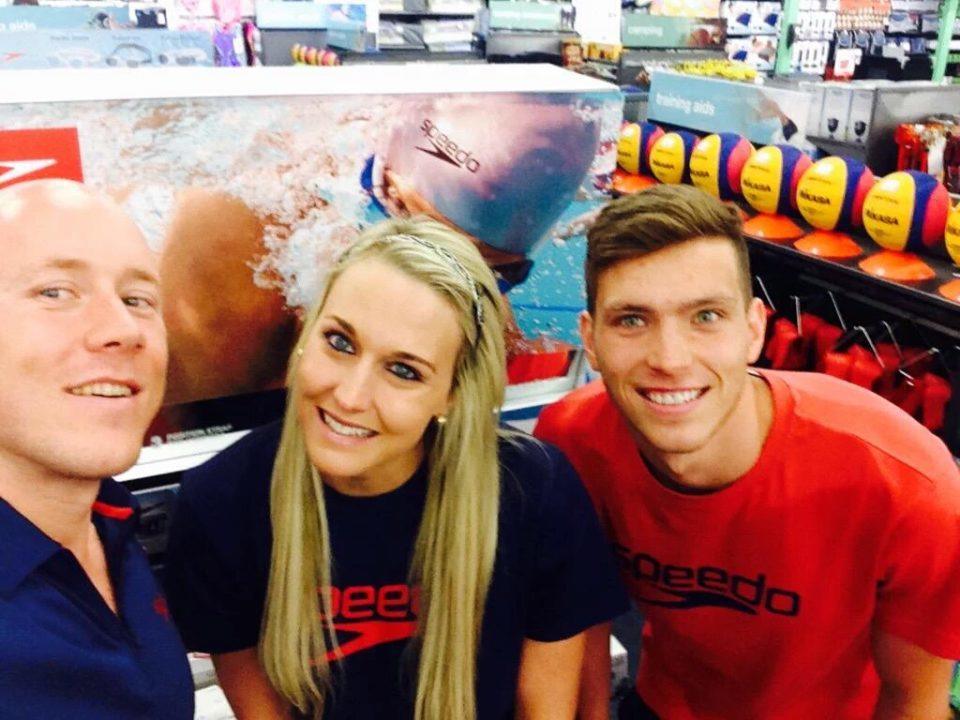 With the South African Olympic Trials having concluded last month, the nation’s roster for the 2016 Olympic Games in Rio has been finalized. With the line-up composed of 11 males and 0 females, the gender imbalance in South African swimming has been placed directly under the spotlight.

At the South African Trials, several women came within striking distance of the required FINA A cuts, including 18-year-old Tatjana Shoenmaker, whose 200m breaststroke time of 2:26.95 painstakingly fell just .01 short of the automatic-qualifying time of 2:26.94. Schoenmaker was within a second of the cut in the shorter 100m distance, as was Tara Nicholas. The aforementioned women scored 100m breaststroke times of 1:08.72 and 1:08.68 in semi’s, respectively, but fell short of the 1:07.85 FINA mark while competing at South African Trials.

2012 Olympian Karin Prinsloo was also among the South African female contingency who saw her Rio dream vanish. She scored a 200m freestyle time of 1:59.86 to touch outside the FINA “A” cut of 1:58.96, while her 100m freestyle time was about 2 seconds off the mark.

Just 4 years ago, 6 women traveled to London as part of the Olympic Games squad, including now-26-year old Prinsloo. As such, the fact that there are no women headed to Rio begs us to ask why this is the case.  SwimSwam spoke with Prinsloo to gain a female’s insight into the state of South African swimming, both present and future.

Retta: Overall, what has changed between 2012’s Olympics and 2016 in terms of what could have impacted no women qualifiers? Is it opportunity? Tough FINA standards?
Prinsloo: As most articles recently about us girls not qualifying puts us ALL in a very bad light. So with my response I’m going to try to keep it personal as possible and name what my problems were. I believe every one’s stories are completely different, although us girls in SA do face a lot of the same problems.

First of all I would like to inform all the critics out there that I’ve seen how hard some girls train, in and out the pool and that they very often beat the guys they are training against. So it isn’t always the case that we are lacking physical or mental toughness.

The girls that made the 2012 team were all around the age of 20-24 years old. Sadly all of them stopped and at this years nationals I (at the age of 26) was the oldest swimmer at the Olympic trials that was close to qualifying.

So yes we have a lot of rising potential and there were 16-19 year old girls that just missed the A-times. But between the ages of 20-25 years there is a massive gap. I have my personal opinions on why there is a gap there, which I won’t expand on, because I feel that complaining about something won’t help the case and will leave everything unchanged. Later on in the article I will expand on how I will try to give back to a sport that was my part of my life for 21 years.

So as for me, I had a really good 2014 where I broke 3 x SA Records and made 3 Olympic A qualifying times and my 2016 Rio Olympics looked were promising.

Sadly everything took a turn for the bad when I got sick just after the last 2014 Mare Nostrum leg, then at the Commonwealth Games and on and off till our 2015’s World Champs trials last year April. The reason for that was my tonsils and I had them removed the week after the world champs trials.

Also in Feb/March 2015 I had a back spasm that came out of the blue and prevented me to train properly for the trials. So a combination of health and injuries prevented me to get the training done that was necessary to qualify.

After not being able to qualify for the world champs where no girls qualified (the times were this years Olympic A-times) it left me very disappointed and I think it was already an indication that there will be a huge chance of no women qualifying this year. A lot of us made the B-times by far but unfortunately those don’t count.

Emotionally it was very hard for me to continue but I started gyming again. As I look back I know that after all the racing at Mare Nostrum 2014 I was burnt out and every day after that was a continues emotional and physical battle. Because of my burnt out body, hard training in and out the pool I developed a swimmer’s shoulder early August right before our African Champs. Something I’m struggling with till today, regardless of physio, massage and rehab sessions.

So after the African Games and 2 world Cups i swam last year I was completely burnt out and my body was constantly in pain. With my whole heart I wanted to continue but my body fought against it just as hard. I then took 2 weeks off and decided that I will give 2016 a chance and that I really want it.

I had to ease into everything again and unfortunately I was only able to push my body again late January this year which left me with so little time before our trials in April.

So for me the hardest thing was feel with everything in me to know I want to compete at my 2nd Olympics and do really well for South Africa but that for the past 2 years, physically everything was holding me back from it.

But I do believe all the young girls at this year’s Nationals that just missed the A-times would have been a lot faster at the Games and would have given them a huge learning experience as I know was crucial for my career and contributed to my success in 2014. I really still pray that SASCOC will give some of us a chance.

Retta: What are your immediate plans? Will you continue swimming and, if so, for how long?
Prinsloo: The past 2 years I was sure that I was going to be done if I don’t qualify for my 2nd Olympics. But I haven’t felt that peace of stopping yet and thus I am continuing to see if I can get to my 2014 PB’s and faster. Only time will tell. It might not even happen but when I look back on my swimming career one day, I want to know for certain that I have given everything.

Retta: How would you describe the state of South African swimming as a whole?
Prinsloo: I do believe there is a lot of depth and potential, but the young girls should be better managed from an early age. And that is one of the things myself and many great ex female swimmers in SA will be part of.

As I said I can’t say much now but what I can say is that I’m truly excited to share my experiences and help other girls where possible. This would include things like clinics, talks and emotional support.

Then obviously we are very grateful for the boys for flying our SA flag high.

Retta: Funding of South African swimmers has been in the news. What is your stance on this? Does the funding cause major issues? Has it gotten worse, better, etc. over your career?
Prinsloo: At the age of 26 it was one of the main things that started to affect me. Training so hard for something but not getting a cent/penny out of it and still being under my dad’s financial support.

I’m extremely grateful for my sponsors. But unfortunately us swimmers don’t have sponsors that pays salaries etc. So to be a professional swimmer in SA you have to do it purely for the love of it. Unless you win a medal at a World Champs or Olympics, which we all know is extremely hard to achieve.

So for a lot of people it is not worth it at the end of the day and their focus shifts from working hard in the pool to working hard at a office job where they actually earn something to make a living.

As for myself I was raised in an era when our swimming federation had the sponsors to send us overseas as a very young girl to compete etc, and something I’m extremely grateful for and which helped me to achieve my goals at an older stage.

Unfortunately SA is a 3-world country and financially all the federations including SASCOC are suffering and can’t afford to spend millions on swimming anymore.

Retta: Do you think there will be particular action aimed directly at women to increase their Olympic participation for Tokyo 2020?
Prinsloo: Yes! There are some huge things that’s going to happen to help the future women’s side swimming in SA. Can’t say much now, just that I’m excited to try to make a difference.

SwimSwam originally reported on Swimming South Africa’s “Get the Girls to Gold” program last year. In July 2013, with the help of Marie Claire magazine and Charlene, Princess of Monaco, Swimming South Africa was able to launch the “Get the Girls to Gold” program, a comprehensive plan to financially support a group of 8 young talented female South African swimmers further their Olympic swimming aspirations.  With an original funding goal of 250,000 Rand (approximately $25,000) per year, the hope was for the group of 8 to earn 2 Olympic medals among them at the 2016 Rio Olympics.

The idea originally started when South African swimming legend Ryk Neethling voiced his concerns of a dire need to help girls achieve Olympic greatness in his country, citing the vast difference in Olympic podium placements between South African men and women over the years.

Wow with 2 girls in the pool – as a mom it was an interesting and although personal – a good read . Thanks for the insight ????

There is an advance opinion piece in the Guardian telegraphing the move to introduce black quotas into SA sporting teams . I guess there are enough Mrs Zumas to get a few into each team . If not he can marry another few hundred or thousand to fulfil South Africa’s hopes & desires.

Then the money will flow.

The interview still does not give any answers as to why our women are far below par. Jonty Skinner made some good points in a Facebook post a couple of weeks ago. I’ve copied it below. That will be a good place to start to address this problem. Some thoughts after watching the Trials. There are no end of athletes swimming in that meet. This hasn’t changed much in decades. South Africa is a bastion of talent, and we are probably one of the best countries in the world with regards to the number of great athletes relative to the total number of swimmers in the country. Skills This is a glaring weakness. Outside of a few at the very… Read more »