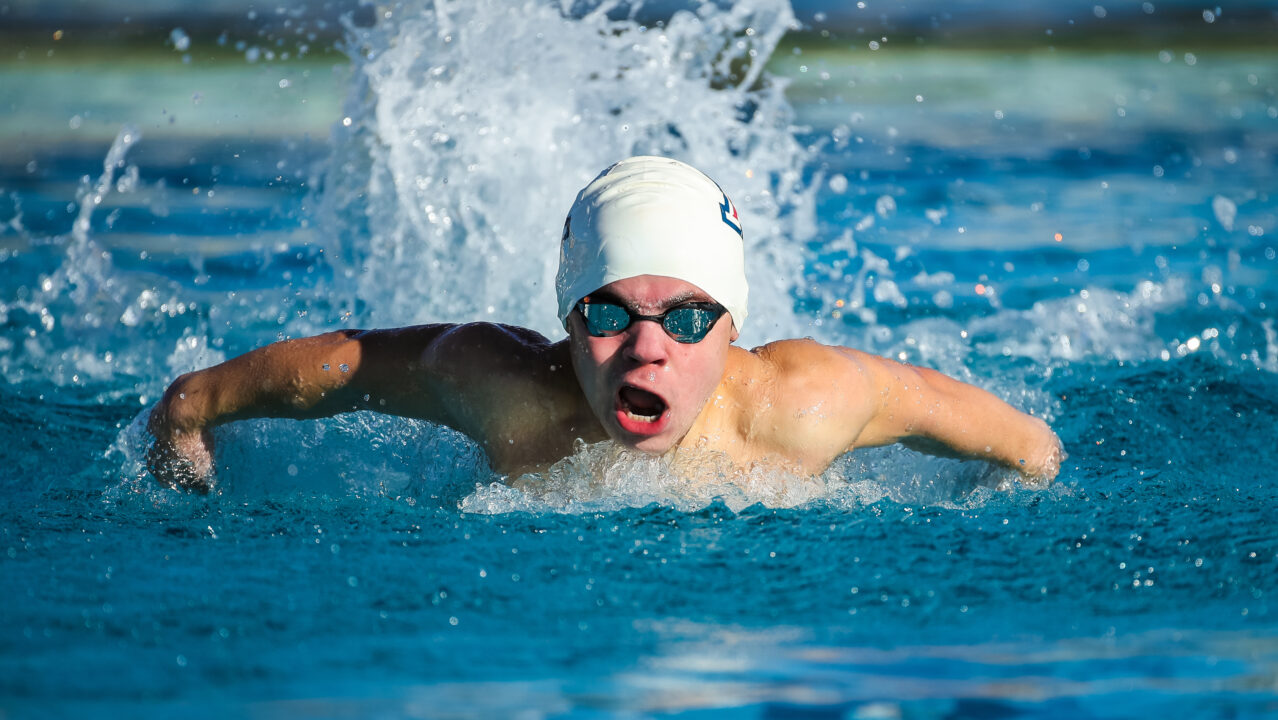 Arizona freshman Noah Thomas (pictured) made some noise at U.S. Para Nationals last month when he picked up a silver medal in the 50-meter butterfly. Current photo via Mike Christy

The nation’s first collegiate program specifically for para swimming is finally taking shape at the University of Arizona.

The Wildcats’ adaptive athletics program features only two swimmers and one triathlete this season, but their team is expected to double in size this fall with two more swimmers and another triathlete signing scholarships.

While there are various opportunities for para swimmers at the college level — just over half of the Tokyo Paralympic team competed collegiately — Arizona’s program appears to be the first of its kind to recruit and offer scholarships purely for that purpose. Now the Wildcats are on the hunt for some competition.

“We want to compete for a collegiate para-swim championship eventually — that’s the goal,” said Pete Hughes, Arizona’s director of adaptive athletics. “Paralympics is awesome, but not every varsity athlete makes the Olympics, so not every para athlete is going to make the Paralympics. So it would be cool to have a collegiate championship.”

For now, Arizona isn’t competing against other college teams because it’s the only one of its kind. But last month, standout freshman Noah Thomas made some noise at U.S. Para Nationals by picking up a silver medal in the 50-meter butterfly. Thomas has four qualifying times for the Parapan American Games this November in Santiago, Chile.

Next season, swimming recruits Story Turner and Liberty Freeman are set to join the Wildcats’ squad led by coach Laura Utsch, who swam for BYU in the 1990s.

“I’m super grateful for the opportunity that Laura and Pete have given me,” Thomas said. “I hope we’re just scratching the surface of what para swimming can become and that this team is going to part of growing our sport.”

Until Arizona finds other college para teams to compete against, the group will continue to swim during the breaks at home varsity meets as well as at U.S. Masters and Move United meets.

“The Americans with Disabilities Act, or ADA, was passed in 1990, the year before I graduated high school — a blink ago,” Utsch said. “We are so far behind where we should be in creating a world where equality and opportunity abounds for all. Reality is, we take where we are and create that change. What we are doing at the U of A with our para swim program is nothing extraordinary. We are a teeny tiny swim team working our tail off to be the best swimmers and people of character we can be, just like the thousands of swim teams all across our planet.

“To offer para swimming at an NCAA Division I school should not be extraordinary,” she emphasized. “Let’s make it ordinary.”

Justin Fleming broke American para swimming records and competed at the 2004 Paralympics in Athens as a 17-year-old before attending Arizona years ago, but he trained with the club team in Tucson because the Wildcats didn’t have an adaptive athletics program back then. Fleming now coaches both para and non-para swimmers in the Seattle area.

“It’s nice to have a peer group,” Fleming said, reflecting on the structure of para swimming. “One of the best things about the Paralympic resident team was that you actually had people training together who looked like each other. Growing up as a club swimmer, I never saw another disabled athlete until I went to Paralympic meets. You go to a meet and you don’t look like anybody else.

“I think the University of Arizona has a very proud, prestigious swimming history, and I think with Pete’s guidance and his enthusiasm for getting Paralympic sports programs on college campuses, it’s the perfect place to start this type of program,” he added.

Fleming also said having a collegiate para swim program will expand accessibility for athletes with lower classification numbers, or greater degrees of impairment. Collegiate opportunities for para swimmers are often reserved for those who are at least close to keeping up with their able-bodied counterparts.

“One of the nice things about the program is we’re going to be able to give some of those lower-classification people an opportunity to swim in college,” Fleming said. “I don’t think there are college teams that want to do it. It’s challenging even in club settings to find coaches who have the space and time to work with those lower classes.

“If you have someone who’s swimming a 50-yard freestyle as fast as they can in two minutes, a lot of coaches don’t see a lot of swimmers who look like that, right? Nor do they have the resources to actually put a training plan together and have the space and time for them to execute it. So that’ll be the big benefit of a program like this.”

In its bylaws, the NCAA preaches inclusivity and encourages disabled athletes to participate in college sports. In practice, among its 1,113 member institutions that support nearly half a million athletes, less than 0.5% have at least one adaptive sport. Colleges have shown a willingness to invest in new opportunities — look at the recent explosion of Esports — just not for disabled athletes.

At the high school level, many states have started to award high school state titles for adaptive sports. In Utah, where Arizona recruit Story Turner competes, the UHSAA’s state championship swim meets will feature “unified” swimming heats for the first time next month. Unified sports are usually for athletes with intellectual disabilities while adaptive sports are for athletes with physical disabilities, however, both will be able to compete in two races — the 50 and 100 freestyle — at the UHSAA state championships.

The UHSAA sanctions unified sports, but not adaptive sports, something Turner hopes will change in the future.

Fleming, for one, is no longer surprised by the lack of progress on disability issues after what he’s seen during his lifetime.

“Surprised? No. I mean, I’m 35 years old and the ADA (Americans with Disabilities Act) happened in my lifetime,” he continued. “I was around when Para Swimming was part of USA Swimming, and they dropped it for financial reasons. Then it became U.S. Paralympic Swimming. There was a lawsuit that happened in the early 2000s from some track and field people who were trying to get equal representation and funding from the Olympic committee. At that time, they decided to split into two committees so they didn’t have to pay. So no, I’m not surprised. I guess I’m surprised that it’s finally happened at some level but I’m not surprised that it’s taken so long.”

Having no competition is frustrating, and funding the growing para swim program is an uphill battle, but Hughes remains optimistic for the future. After all, when he took over Arizona’s adaptive athletics program five years ago, the Wildcats had about 10 student-athletes. Now they have 65, all on some kind of athletic scholarship.

“I do think the movement is on its way,” Hughes said.

FWIW, Rice has a para-olympic gold medalist on their team. d

I know Summer Schmidt and she competes for the gophers women’s team.
I can’t wait to see more para athletes in the college area!

I hope the NCAA allows para athletes to receive a proportionate amount of scholarship money to these athletes. Does the NCAA have rules on how to divy up scholarship funds? These don’t count for the limit for the whole swim team?

Nevertheless I would love to watch more para athletes compete!

Why not both? Let athletes access the coaching, nutrition, and lodging of the Training Center, for older athletes but also fund college swimming?

That would be fine if they had elite coaching available and the program was run better. I don’t think the coaching done there is that high a level.

This and all that follow are coming from the work done at the usopc’s collegiate partnership program. Educate yourself prior to the keyboard bs you want to spread. The program at the optc has been abused by athletes that just want to vacation there rather than train full time with the residents. All of the so-called high profile(read corporate sponsored) swimmers that go there for a week or two here and there should stay home and stop wasting everyone’s time and money. Could you imagine if there were more college programs? They might just weed out these prima-donnas. The optc group was originally and should remain for those that can not get their training needs met at home. Never meant… Read more »

I don’t think we disagree that much. They should fund more of these college programs.

Current para swimming national team member and college student here – this is amazing. I wish I knew about UofA a few years ago. I’m going to try and maintain some degree of anonymity here, but here is my experience with collegiate swimming as a para swimmer.

I’ve competed internationally for Team USA and medaled at some high profile meets. However, during my admissions process, I was either ignored or flat-out denied by every NCAA program I reached out to (albeit I was limited by cost – there are a few other great, but expensive programs for para swimmers out there). Most ended up citing team size concerns due to COVID eligibility extensions. I ended up just going where I… Read more »

Thank you for sharing your experiences. Does your university offer you any support services as a Team USA non-NCAA athlete such as access to athletic training facilities, preferred class registration, etc.? I’m from a Winter Olympic sport that is not an NCAA sport and some of our Team USA athletes who are full-time students receive support from their university’s athletic department although what that support looks like varies depending on the university and the athlete’s accomplishments.

You are amazing, and I continue to be so proud of you for finding your voice. You hold more power than you think. Keep speaking up and never fear what others may think. You are on the correct side of injustice and your voice can make change happen.

There will always be time to go back to school. Those institutions have existed for millennia and will continue to exist far into the future. Your life only unfolds once and seizing the moment without regret is what truly matters. Can’t wait to see you make it to Paris!

This is fantastic news! Congratulations to these athletes and Mr. Hughes for getting this started!

How does one downvote a comment like this? There’s eSports galore but few collegiate para opportunities. It’s way past due time for this. I too am a proud Wildcat.