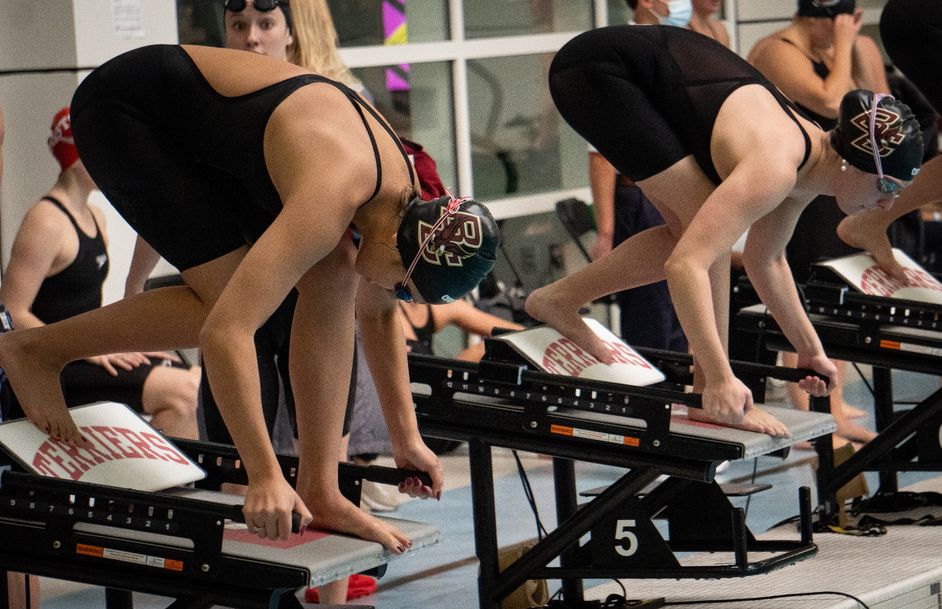 The BC Eagles had a dominant performance at their rivalry meet versus BU, breaking three school records and fifteen pool records. Archive photo via Boston College Athletics

The battle of Commonwealth Avenue went for a swim this weekend, as Boston College and Boston University faced each other in a rivalry meet.

The Eagles entered the new year with a ton of momentum from last season, where they set multiple school records and where Zachary Szmania place 15th in the mile, which is the second-highest ACC finish in program history. Despite naming Joe Brinkman as the new head coach just before the start of the season, when Mike Stephens took the job at Hawaii, that momentum has not slowed.

The last time these teams faced each other was at BU’s midseason Terrier Invitational, where the Eagles dominated, setting 11 school records and six pool records en route to the win. It was a similar story at this meet as BC easily took the win on both the women’s and the men’s side, setting three school records and 15 pool records in the process. They won 27 out of the combined 32 events, including 13 events where they went 1-2-3.

Later, Samantha Smith took down the 200 fly school record, posting 2:00.80 and undercutting the previous record by .37 seconds. It’s a big best time for Smith as well, whose lifetime best at the start of the meet was 2:02.33.

The third school record breaker was diver Dale Nickerson, who totaled 388.88 points on the 3-meter board. That score also qualifies him for NCAA Zone A Diving Championships.

Her 200 backstroke time brought the pool record under the two-minute mark for the first time, as it had stood at 2:00.92 since Alyssa Marsh swam it in November 2019.

There was a flurry of pool records on the men’s side as well. Like the Eagle women, the men took down both the 200 medley and 400 free relay records.

The highlight of the meet for the BU Terriers was the three pool records the men’s team set. Senior Kyle Falkstrom swept the breaststroke events in record fashion, clocking 55.31 in the 100 and 2:00.73 in the 200. Both of the previous records were held by Army’s Evan Zhang.

Then, freshman Tony Ponomarev swam the 200 backstroke in 1:47.08, shattering the pool record of 1:49.30 by over two seconds. He was also less than a second off of his personal best of 1:46.19, which he set at the midseason Terrier Invite.

Though they finished second to the BC team, the Terrier quartet of Justin Lee, Ben Cho, Jackson Olin, and Ethan Thomas also got under the old pool record in the 400 free relay, touching in 3:03.69.

BU is back in action on January 27th, for Senior Day action against Bryant University. BC has wrapped up their dual meet campaign, but looks to continue their dominance of Commonwealth Ave when they head back to BU for the Winter Open February 3-4.

BC on the come up.
They might be able to make some waves at the ACC meet.
That is one of the deepest meets in the country but some of these times are pretty Legit with about 3 weeks to go for them.

Great to see that Joe Brinkman is already having so much success. Great coach and person!