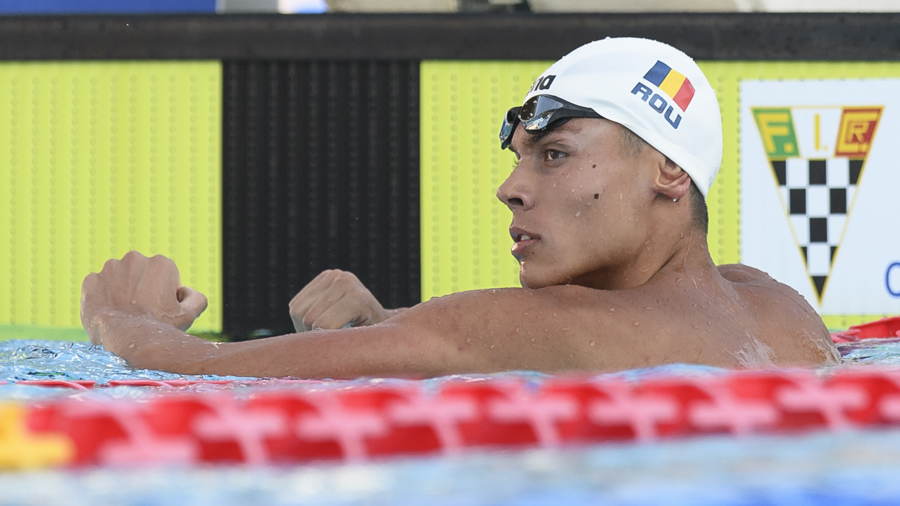 Still only 16, Romanian David Popovici is already the fastest swimmer aged 18 and under in the history of the men's 100 freestyle. Current photo via Andrea Masini / Deepbluemedia / Insidefoto

In the last few days, Romanian David Popovici lowered the men’s 100 freestyle world junior record twice at the 2021 European Junior Swimming Championships. Popovici first brought the world junior record down to a 47.56 on day 1 of the meet while swimming the opening leg of Romania’s 4×100 freestyle relay. Then he did it again in the final of the individual event with an astonishing 47.30.

A junior swimmer in men’s swimming must be 18 years of age or younger as of December 31st of the year of the swim. That’s why Popovici’s feat is so impressive, since he will turn 17 in September.

To put his performance in perspective, Instagram’s Swimming Stats page has published the all-time list of the fastest 18-year-old & under in men’s 100 freestyle.

The Romanian is also almost two full years younger than the previous world junior record holder, Andrei Minakov, when the Russian set a 47.57 at the Russian Nationals last year.

Note that not all swimmers on this list were junior swimmers at the day of their swims. For example, Jack Cartwright recorded a 47.97 in 2017 at 18 years and 307 days of age, but on December 31st of that year, he already had turned 19.

The first 18-year-old to crack the 48-second barrier was Kyle Chalmers during the preliminary heats at the 2016 Olympics with a 47.90. He would break the world junior record twice more in Rio (47.88 in the semis and 47.58 in the final, which he won).

Then, Minakov broke Chalmers’ record last year with that 47.57, just to be surpassed twice this week by Popovici.

In my list above I forgot to mention James Magnussen.
2011
https://www.youtube.com/watch?v=P7nc9KwLDog

Open to the possibility that Alexandr Shchegolev might just end up being the deciding factor in the 4×100 free.

They have Grinev, Morozov, Rylov, and Zhilkin too so I don’t know who will swim the final.

Hunter Armstrong isn’t on this list? Must be a typo

“A junior swimmer in men’s swimming must be 18 years of age or younger as of December 31st of the year of the swim. That’s why Popovici’s feat is so impressive, since he will turn 17 in September.”

The list is 18 and under . It’s not going by what age they will be by Dec31st that year . I thought the same thing though at first.

I think junior swimmers are judged based on their later accomplishments. If Thorpe and Phelps never ended up Olympic gold and had their WR’s subsequently lowered by others, their 16yo achievements would be less impressive. We don’t think of that as a criteria of “greatest junior swimmer” but their later continuation of the trajectory is important is how we judge them

Any idea why there are no Americans on the list?

Cuz American sprinters peak during their time in the NCAA system.

No American in that list.
It’s not a coincidence.
The bathtub effect for most of US kids and the focus on underwaters, power, lot of kilometers to the detriment of above the water and stroke technique training?
Their LCM is usually better while becoming older.

Actually, it’s not quite universal like that Steve, though predominantly so for sure. When I was actively training & competing decades ago (now just training only), we always loved to work out in the summer at the outdoor 50M pool in our area. Though I was a year-round swimmer in northern Indiana, the summer league was always outdoors in 25 & 50M pools, which was always both fun & a challenge. Also, there are some clubs that had 25m pools almost entirely outdoor. So we were restricted to outdoors for meters from May – September only. We had lots of turns in our indoor YMCA 25y pool, but that was long before the advent of the 5th stroke & its… Read more »